Most shale gas reserve estimates show that approximately 15 Bcf/d to 17 Bcf/d of new gas from shale plays within the U.S. can be produced at a cost of less than $4/Mcf. Liquid-rich gas provides an even more compelling production scenario such that the liquids portion funds an even lower break-even supply cost for the combined liquids and gas streams. This new production is a significant “step-change” in the U.S. natural gas landscape. Essentially, the immense shale gas reserves mean that the U.S. can supply new gas demand up to approximately 86 Bcf/d to 90 Bcf/d, compared to our current gas usage of approximately 70 Bcf/d. Until the combined total of our current gas use and new gas developments approach this threshold, we will likely see “depressed” gas prices below $5/Mcf. This emerging gas supply picture essentially means we need more gas monetization projects in all forms and the sooner, the better.

The two most probable and most consuming routes (from a monetization perspective) for natural gas developments are LNG and gas-fired power. World-scale LNG export facilities typically utilize 1 Bcf/d to 1.2 Bcf/d for a two-train facility. The developments come with a high capital cost because of the low refrigeration temperatures required and auxiliary systems (such as tanks, piping, and jetty). However, viewed as a normalized capital cost (capex divided by gas volumes to be monetized), LNG projects compete well with other monetization options. Another possible avenue for gas demand uptake is the concept of many small, distributed LNG plants for the U.S. transportation fuels market, primarily to displace diesel usage. These plants will utilize much less natural gas—30 MMscf/d to 100 MMscf/d—but can be built for considerably lower capital cost and strategically placed throughout our country’s primary diesel fuel usage thoroughfares (major highways, rivers, and the U.S. Gulf Coast).

The second high consumer of natural gas outside of LNG is gas-fired power. Combined cycle gas turbine (CCGT) plants consume gas at a rate of 72 MMscf/d per 500 MW of power. We can likely expect more CCGT power plants to be built in the coming years because:

The current LNG export debate misses the primary issue affecting the LNG plant development rate. New LNG export facilities are not likely to affect U.S. gas prices until we start to approach more than 10 Bcf/d in gas consumption for LNG. Before we approach this gas consumption rate through LNG export, developers will be starved for good export sites (sites that can be developed for less than the going rate of $1,200 per ton) and the LNG markets will start to limit the new projects through the tightening worldwide LNG demand picture (no buyers means no projects).

By 2020, many new LNG projects will come online, primarily out of Australia. It is debatable whether LNG consumption can grow at the same rate as the current LNG production forecast. LNG developers will tend to focus on the U.S. Gulf Coast and conversion of import terminal sites to export facilities. Figure 1 shows the various U.S. and Canadian sites being considered as well as existing LNG import terminals. The import-to-export conversion projects may focus on lowering capital expenditures and develop smaller production trains, below the current 5.5 million tons per annum (mtpa) optimum train size. However, beyond this handful of Gulf Coast and import terminal sites, LNG greenfield site development becomes much more expensive. 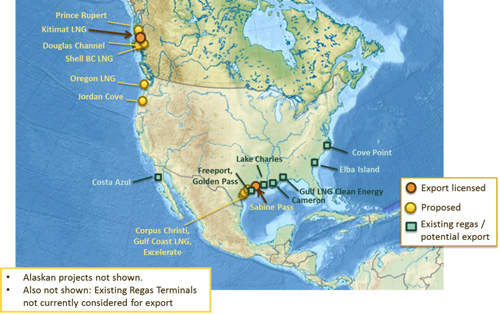 In recent years, the capital costs for new greenfield LNG plants (on a per ton basis) have risen dramatically, calling into question the “economies of scale” argument for larger train sizes. Figure 2 compares the LNG plant capital costs on a cost per ton basis versus train size over three periods of time. All costs are shown in 2012 dollars. The trend shows a decreasing cost in the early years of LNG developments when capital costs started to approach $300 per ton. After 2000, the LNG plant installed costs are more scattered and the capital costs appear to level off, even with increasing train capacities, at around $400 to $500 per ton. 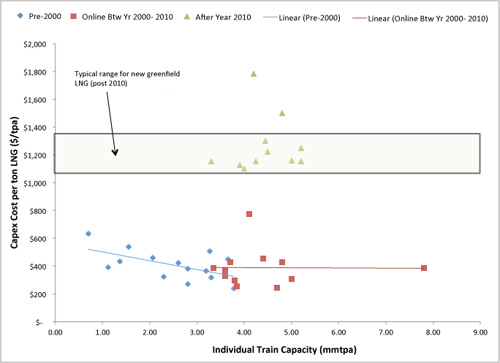 Unfortunately, post-2010 project data indicates significantly higher capital costs for a typical train size 4.0 mpta to 5.5 mtpa. Average capital cost for the current plants under construction is $1,200 per ton (three times the cost just 10 years prior). The cost increase is primarily due to more difficult greenfield site development and the increased cost of materials. High labor costs and an unskilled labor force in more remote areas are also contributing factors, which may not be the case for U.S. developments.

The new capital cost environment challenges the conventional project and contracting structure and plant design considerations. The capital cost realities combined with a probable contraction of the LNG market will likely limit LNG export plant growth in the U.S. to no more than 5 Bcf/d to 6 Bcf/d of natural gas consumption. Although this will help to alleviate some of the pipeline capacity constraints in the oversupplied regional gas markets, LNG projects alone cannot absorb the surplus of gas production expected in this country.

Another area where significant gas demand growth can be expected is in gas-fired power projects, namely through new combined cycle gas turbine power plants to replace older coal plants. CCGT plants are the highest efficiency plant for fossil fuel power (latest generation plants exceed 60% efficiency) and, at $1,200/kW installed, offer a relatively low capital cost expenditure compared to LNG, GTL, or other industrial uses. The capital cost per cubic foot per day of gas flow for CCGT power is around $6.10 to $6.30, compared to a modern LNG export plant at around $8.80 to $9.10/cubic foot per day. CCGT power plants produce roughly one-half to one-third of the greenhouse gas emissions of a comparably sized coal plant.

Based on the last 12 months of historical electrical power data from the U.S. Energy Information Administration, we have mapped the expected increase in gas-fired power going forward. As shown in Figure 3, the historical data shows that the accelerated rate of coal to gas-fired power switching started to occur in the fourth quarter of 2011 once the reality of low gas prices was beginning to sink in with power producers. The trend has continued into 2012 and will likely impact 2013, by boosting gas-fired power production by approximately 20% to 30% year to year. Using this uptake rate and the typical electrical power cyclicality, it is likely that total gas demand will approach gas-fired plant capacity (~185 GW) by the 2015–2016 timeframe (Table 1). 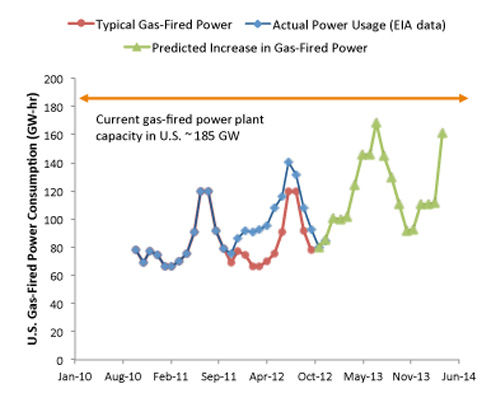 In certain regions, we are likely to see new simple cycle and CCGT plants built out sooner due to regional variations in gas production and coal plant retirements. In areas with high activity from oil and gas producers, given gas pipelines operating close to capacity and the need for more power for drilling operations, heavy-producing gas regions will be incentivized to build new gas-fired power. Regions such as the Eagle Ford and Marcellus shale gas areas come to mind. Another factor is the age and emissions of existing coal plants—the majority of older coal plants (operating for 40 years or more) are located in the Northeast and Southeast. In areas where power demand, aging coal infrastructure, and surplus gas coincide, we can expect many new CCGT plants to be built.

Gas-fired power and LNG projects are two of the most critical monetization routes and jointly, over the next 10 years, these projects may start to approach the 17 Bcf/d in new gas flows needed to affect natural gas prices. These primary gas monetization routes combined with smaller industrial and chemical conversion projects can help to “balance the scales” in the currently oversupplied U.S. natural gas market.

—Marybeth Nored is a project engineer at Apache Corp. Dr. Klaus Brun is the director of the Machinery Program at Southwest Research Institute. This article is adapted from a presentation at the 2013 Gas-Electric Partnership annual meeting.