Several states have already instituted mercury emission limits in expectation of tightening mercury emission rules that will require reductions of up to 91%. Coal-fired plants searching for an economical way to meet the new limits may need to look no further than replacing their baghouse filter elements.

Recent testing results found that by using General Electric’s (GE’s) unique filtration elements, mercury capture as high as 98% is possible by using inherent fly ash alone. Until now, typical coal-fired boiler air quality control systems (AQCS) did not have the ability to have these high levels of mercury scrubbing without powdered activated carbon injection (ACI). Tests conducted by PCT Inc. at the Southern Co.’s Mercury Research Center (MRC), located at Gulf Power’s Plant Crist—the only facility of its kind in the world allowing full-scale testing—confirmed these high mercury capture rates, even though the majority (about 80%) of mercury was in an elemental form in the flue gas. Traditional round filter bags typically capture a significantly lower percentage of mercury in the flue gas by inherent fly ash.

Data was also collected with injection of ACI upstream of the baghouse.  It was found that by using these innovative filtration elements, the plant, which had already been using ACI, reduced its consumption of ACI by as much as 85%. Further information on mercury removal co-benefits the coal plant AQCS is available in the POWER and COAL POWER on-line archives, such as Determining AQCS Mercury Co-Benefits, Advanced SCR Catalysts Tune Oxidized Mercury Removal, and Mercury Control: Capturing Mercury in Wet Scrubbers: Part I and Part II.

GE manufactures pleated filter elements for flue gas filtration from coal-fired boilers (Figure 1).  These ThermoPleat filter elements are constructed from a high-density unsupported-needle felt media that’s stiffened by a state-of-the-art thermal bonding process (a version of these made from Aramid fibers is available as well) and is laminated to a microporous, expanded PTFE membrane as the filtration surface. These elements are a direct replacement for standard filter bags and cages.  Their shorter length helps keep the filter element out of the inlet gas stream, reducing abrasion problems and providing for a larger drop-out area.

Table 1 below shows a typical comparison of filtration surface area provided by ThermoPleat pleated elements as compared to traditional filter bags and cages.

Pleated filter elements (like ThermoPleat) provide significantly higher filtration surface area as compared to conventional round felt bags. The filtration medium in these elements was GE’s proprietary laminate QR811. As a result, we hypothesized a greater native capture of mercury by a baghouse using these elements. This hypothesis was also supported by some anecdotal data collected from customers.  To prove this hypothesis, GE decided to conduct a series of tests at Southern Co.’s MRC.

PCT Inc. conducted the testing over a period of 10 days to determine actual mercury removal performance of the filter elements. The results:

Figures 2, 3, and 4 illustrate a portion of the results at various conditions of gas flow rate, cleaning modes, and flue gas temperatures.  The average level of mercury in the flue gas stream incoming to the baghouse was 10.3 µg/m3.  The speciation was 80% elemental and 20% oxidized. The selective catalytic reduction (SCR) system was kept out of service for the entire duration of testing. Without the SCR, this level of mercury speciation is consistent with historic data from the MRC facility. 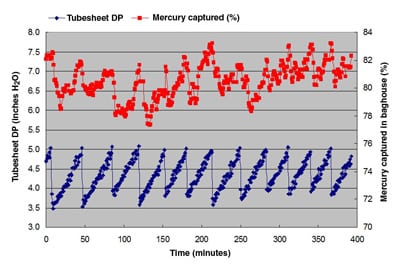 2. Mercury capture data. With an air to cloth ratio of 3.7; temperature is 343F; cleaning in pressure mode with set points of 4 inches of H20 pressure drop (clean), and 5 inches for dirty conditions. Source: GE Energy 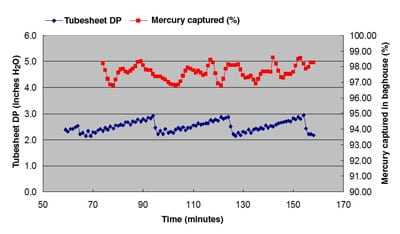 3. Mercury capture snapshot data through three cleaning cycles. The filters have an air to cloth ratio of 3.7; gas temperature is 280F; and automatic cleaning every 30 minutes.  Source: GE Energy 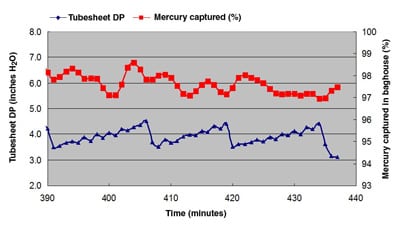 4. Mercury capture snapshot data through three cleaning cycles. The filters have an air to cloth ratio of 5.15; gas temperature is 280F; and automatic cleaning every 15 minutes.  Source: GE Energy

These unexpected findings encouraged digging deeper into the underlying mercury formation and capture mechanisms at work. There appeared to be something unique about pleated elements and membranes that is causing the higher-than-expected mercury capture rates. The capture rates could not be explained by cleaning interval and air to cloth ratio alone.

Further experiments led to the conclusion that the primary cause of the increased mercury removal across the pleated elements is caused by the fly ash. One surprise, however, was that while the baghouse provided no additional mercury removal (when operated in a series downstream of the electrostatic precipitator), it continued to oxidize mercury—even in absence of fly ash.

Based on this observation, the proposed mechanism for the high amount of mercury capture by membrane pleated elements can be explained as:

In the proposed model, the membrane facilitates mercury oxidation, and the pleats facilitate capture of oxidized mercury.  Both are required to achieve the high total capture rates observed during testing.

This demonstration proved that pleated elements with GE’s proprietary laminate QR811 were an effective replacement for standard cloth bags on wire cages and required much less physical space than typical filter elements.  Mercury removal of more than 95% across the baghouse was achieved with only the LOI in the fly ash, which averaged about 4.3%.  When supplemented with activated carbon, much higher removal was achieved. Lower temperature operation increased removal as did reducing the cleaning frequency, which led to thicker filter cakes on the bags. In this short-term test, the pleated bags achieved very high levels of mercury removal without imposing any detrimental effect on unit operation.

Vishal Bansal (vishal.bansal@ge.com) is a principal engineer, Robert W. Taylor  (robert.taylor@ge.com) is a consulting engineer, Pete Maly (pete.maly@ge.com) is an engineering manager, and Bryan Yetter (bryan.yetter@ge.com) is a product leader with GE Energy. The authors express their appreciation to PTC Inc.’s Ralph Altman and Charles Lindsey for their excellent work in support on this project. The authors are also wish to acknowledge Norit Americas Inc. for supplying the powdered activated carbon for the test. References to the Mercury Research Center should not be considered an endorsement by Southern Co., which owns the facility.