U.S. Environmental Protection Agency (EPA) rules are being processed at a furious pace in 2011. Unexpectedly, the new greenhouse gas and ozone rules were stayed by President Obama. However, it’s the Utility MACT Rule and the Cross-State Air Pollution Rule that leave utilities on unsteady ground. The result has been a number of plant closure announcements that far exceed the magnitude of the coal-fired generation losses predicted by the EPA. The predicted losses vary greatly.

The market response to the U.S. Environmental Protection Agency’s (EPA’s) back-to-back air emissions regulations is now being felt across the nation. As we report [link to feature 5] in this issue of COAL POWER, several utilities have already announced specific coal plant closures stemming from the new air rules. American Electric Power, Tennessee Valley Authority, Progress Energy, Louisville Gas & Electric, Kentucky Utilities, and Duke Energy are among those utilities that have made their plant closure decisions public.

My discussions with other utility executives suggest that many other plants are under serious consideration for closure. Expect more closure decisions to be made public after New Year’s Day. It’s too early to see if the recent backpedaling by the EPA on greenhouse gases (GHGs) and ozone will affect these closures. The Cross-State Air Pollution Rule (CSAPR) has also provoked a number of lawsuits, including several requests to halt the rule from becoming effective.

The EPA’s analysis of the Cross-State and Utility MACT rules predicted that between 1 GW and 9 GW of capacity will be lost through retirements. But that estimate has already been exceeded, so the real number must be much higher.

POWER magazine, the parent publication of COAL POWER, researched the magnitude of future coal plant closures in much detail in the May issue of POWER.  In “The Future of Coal” special section that month, we asked ICF International to predict the magnitude of coal plant closures forced by all the pending regulations emanating from EPA. Their lengthy study concluded that up to 51 GW may close over the next decade.

We took a more simple-minded approach by querying a U.S. coal plant database provided by Burns & McDonnell, culling out those older plants with low capacity factors and without any air quality systems installed.  The result of our internal study was about 48 GW of potential closures.

Other respected consulting groups have walked a similar path. Black and Veatch in December 2010 predicted that coal power’s share of national generation will decline from 45% to 25% by 2035; Cambridge, Mass.-based The Brattle Group predicted in their December report that 50 to 60 GW will close by 2020; analysts at Zurich-based Credit Suisse Group AG said last September that about 60 GW of coal capacity may be retired; and the North American Reliability Corp. (NERC) suggested about 7% of the nation’s energy capacity—or about 70 GW—could close.

Some government entity projections are just as high. The Federal Energy Regulatory Commission’s (FERC’s) estimates that 40 GW to 81 GW of coal-fired capacity could shut down as a result of the EPA rules are in line with findings from the private sector. And, at a February renewable energy conference, Energy Secretary Steven Chu said, “We’re going to see massive retirements within the next five, eight years.” 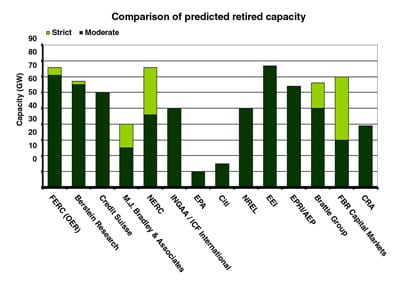 1. Comparison of predicted capacity retired due to new EPA regulation.  Source:  The Committee on Energy and Commerce, Hearing on “The American Energy Initiative,” September 12, 2011.

Better insight into the Obama administration’s view of plant closures comes from an unlikely source. DOE deputy assistant secretary and former power industry executive James Wood said when speaking at the Eastern Coal Council’s annual conference in May that new air pollution, water, and waste disposal rules could result in the retirement of between 35 GW and 70 GW of coal-fired generation.

“Number one, electric rates are going to go up,” he said. “Number two, whether or not construction jobs in the green industry are created, I think there’s virtually no manufacturing jobs that are likely to be created from the replacement of coal. Three … transmission grid stability is likely to emerge as a major issue, both because of the shutdowns and because of the intermittency of renewables.” Woods went on to say that his accounting does not include the impact of pending GHG regulations. That number gets us into the ballpark—but his estimate is broad, and it hasn’t been presented as the EPA’s official estimate.

During a January press conference, EPA Administrator Lisa Jackson stated that the agency will be working with FERC to model “the potential for coal-fired power plant closures prompted by pending EPA climate, water, and other rules.” According to FERC Chairman Jon Wellinghoff, the modeling “could provide vital new data to help in planning a strategy for addressing any generating capacity loss resulting from plant closures.” News of the promise of this modeling work was well-received as an indication that the EPA was at least suggesting their concern about the reliability of nation’s power supply and grid stability given the large number of plant retirements predicted.

On May 17, however, ranking member of the U.S. Senate Committee on Energy and Natural Resources Sen. Lisa Murkowski (R- AK) received a letter from FERC stating that nothing as extensive as joint modeling has occurred. Sen. Jim Inhofe (R-Okla.), ranking member of the U.S. Senate Environment and Public Works Committee, subsequently wrote a letter to Jackson on August 16 asking her to explain this discrepancy and “clarify the extent to which EPA has worked with a number of agencies on the issue of electric reliability.”

“Today in Congress there is bipartisan concern that the Obama EPA’s Utility MACT rule will result in a significant number of plant closures, increase electricity rates for every American, and, along with the transport rule, destroy nearly 1.4 million jobs,” Sen. Inhofe said. “Now we have learned that EPA has failed to collaborate with FERC to consider how Utility MACT will affect electric reliability. In fact, FERC Commissioner [Philip] Moeller went as far as to say that ‘the Commission has not acted or studied or provided assistance to any agency, including EPA.’”

Inhofe alleged that Jackson lied to the nation in January when she said: “The Obama-EPA cannot afford to get this wrong: Utility MACT could force the closure of hundreds of coal plants across the country, which could put a significant strain on our electric grid—and, with a price tag of $11 billion, it is projected to be one of the most expensive rules in the Agency’s history.”

Inhofe went on to say: “EPA is pursuing its war on affordable energy without regard to the nation’s economy or energy needs. EPA should halt this process and finally engage in a comprehensive regulatory analysis of Utility MACT and all its pending train-wreck rules.”

I don’t find it surprising that Jackson has yet to respond to Inhofe’s request for the EPA’s estimate of plant closures, especially since the announced plant closures far exceed the EPA’s official estimates. I also don’t find it surprising that Jackson shows little interest in following through on her promise to work with FERC to better quantify the impact of coal plant closures on the national grid reliability. Jackson must still believe, despite ample evidence to the contrary, that the number of plant closures will be substantial and not trivial, as the published estimates suggest.

I also find it ironic that Jackson believes that the EPA can estimate the number of workdays missed due to illness caused by a particular type of air emission from a particular coal-fired plant spanning decades in the future, but that the agency is seemingly incapable of estimating the impact of their regulatory morass on the nation’s economy.

CORRECTION: This article has been corrected to reflect that James Wood is the deputy assistant secretary for Clean Coal at the Department of Energy’s Office of Fossil Energy, not the EPA, as previously stated. COAL POWER regrets the error.