The U.S. Energy Information Administration (EIA) 2013 Annual Energy Outlook projects that natural gas and coal will continue their fierce competition for generation share that has developed over the past decade through 2040, with gas slowly gaining but coal remaining the largest source of generation in the AEO2013 Reference Case.

Though there is significant uncertainty about future fuel prices and electricity demand, the EIA reports in an analysis released April 23, “Natural gas-fired plants continue to be the favored source for new generating capacity over much of the projection period because of their relatively low costs and high efficiencies.” Still, coal should retain its competitiveness as a result of favorable fuel prices compared to gas, as gas prices are expected to climb faster.

The situation the industry faced in 2012, when dramatic decreases in the delivered price of gas drove coal- and gas-fired power into near parity, is not expected to continue into the near future as gas prices rebound. However, because fuel prices vary between regions, and considerable variations in efficiencies exist across existing and planned fleets, dispatch-level competition between gas and coal will continue for the foreseeable future.

However, a few changes in assumptions make significant differences in the EIA projections, as shown in Figure 1. 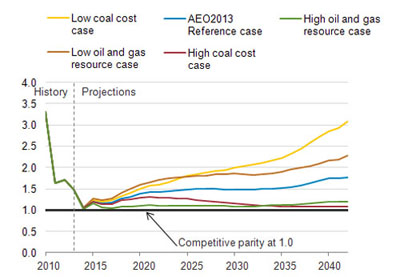 1. Coal is expected to retain a price advantage over gas through 2040, but shifts in resource costs and availability could change that. Source: EIA

In the event that stricter regulations and lower productivity push up the price of coal, or if shale gas recovery proves to be higher than projected, gas becomes much more competitive over the long term, which leads to gas-fired capacity surging past coal to become the largest generation resource (Figure 2). 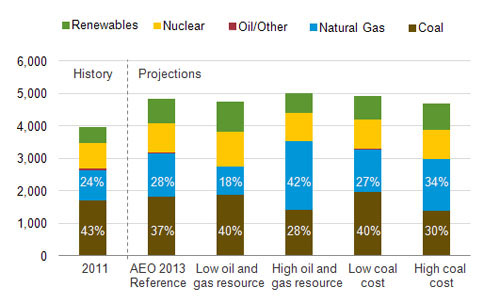 2. Coal is projected to remain the largest generation resource, but it could lose substantial share if projections for its cost advantage do not play out as expected. Source: EIA

On a regional basis, coal and gas will see significant differences in competition. Because the Southeast has seen the development of a highly efficient fleet of new combined cycle plants over the past decade and has higher coal transportation costs than other regions, coal is expected to struggle in the dispatch order even under the Reference Case assumptions. Assuming higher gas production, coal generation could drop to under 25% of the mix by 2040.

This is an expectation echoed by generators in the Southeast. Speaking at the LDC-Southeast Gas Forum on April 16, Southern Company Vice President of Fuel Jeff Wallace reported that the change in gas supply and prices has upended Southern’s once-coal-heavy fleet, which as recently as 2008 drew nearly 70% of its power from coal. That figure fell to 36% last year, and under assumptions of continued cheap gas and increasing coal costs, Wallace projected that Southern’s generation mix might see as little as 22% coal as early as 2020.

In contrast, largely because of ample coal supplies and competitive pricing, coal is expected to maintain its current advantage over gas in the Midwest, even under gas-friendly assumptions. The Midwest’s ability to shift to less-expensive forms of coal should blunt coal-to-gas switching even when gas supplies are abundant and prices remain low. Additionally, the region does not have a large, efficient combined cycle fleet such as exists in the Southeast, meaning that gas’s share of the generation mix remains limited. Thus, the EIA Reference Case projects that coal will still represent almost 50% of the region’s total capacity in 2040 even with an expected 15 GW of coal generation being retired.