Wholesale power prices across the nation plunged between 27% and 37% at major trading hubs last year compared to 2014, the Energy Information Administration (EIA) reported.

The agency said on January 11 that the drop was driven largely by lower natural gas prices. Natural gas spot prices in 2015 at the Henry Hub averaged $2.61 per million British thermal unit (MMBtu), the lowest annual average level since 1999.

Low prices and strong production led to the increased use of natural gas for power generation, which is projected to be about 26.5 billion cubic feet per day (Bcf/d) in 2015, exceeding the 24.9 Bcf/d level in 2012. More power was generated from natural gas–fired plants than from coal plants in April, July, August, September, and October (and data for November and December is unavailable), it noted. 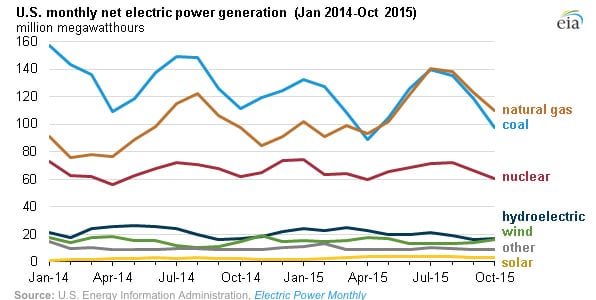 Coal is still expected to surpass natural gas as the most prevalent fuel used for power generation for 2015 as a whole. However, “Because natural gas-fired generation sets the marginal price in many markets, wholesale electricity prices are sensitive to changes in natural gas prices,” the EIA explained.

As in 2014, monthly average wholesale electricity prices were typically highest in the Northeast. They were often the lowest at Mid-Columbia in the Pacific Northwest, where hydroelectric dams are a plentiful and low-cost resource, even though water and snowpack levels in 2015 were low compared to historical averages, the EIA said.

Between 2014 and 2013, wholesale on-peak power prices were up at trading hubs owing to increases in spot natural gas prices and high energy demand caused by the polar vortex at the beginning of 2014.

In 2015, on average, natural gas combined cycle units across the country operated at capacity factors consistently 5% to 11% higher each month than either of the past two years. Nuclear generation was also the highest since 2010 as low levels of outages led to high capacity factors. “Nuclear outages were less than 3% of capacity this summer and dropped to nearly zero during four days in August, the lowest levels on record,” said the EIA.

Hydropower accounted for about 6% of the nation’s total generation through October, despite the lower-than-normal water and snowpack. Generation from wind and solar, meanwhile, totaled 4% and 1% respectively through October.