Arguably, water usage is the environmental Achilles heel of shale gas fracking for many reasons. For one thing, the water has to be blended with some combination of chemicals, salts, and sand to fracture the rocks and liberate the hydrocarbons. This water, when it flows back out of the well, then has to be treated. For another, large volumes of water may not be available where the fracking sites are located. Third, the Environmental Protection Agency and state authorities are likely to impose stricter limits on discharges, adding costs for water-based hydraulic fracking. The typical shale gas well requires millions of gallons of water.

So what if you could frack without water?

The June 2012 issue of GAS POWER described Calgary-based Gas Frac’s fracking process that uses liquefied propane gas (LPG), which has been demonstrated in Canada across a thousand wells. Now, Tarrytown, New York–based Expansion Energy has patented the VRGE process, which is based on cold compressed natural gas (CCNG). In effect, it entails using a recycle loop of gas from the well itself. Although Expansion Energy is a startup, it has apparently contracted with Dresser-Rand to manufacture the equipment.

As part of the process, raw natural gas is converted to CCNG in an on-site cryogenic plant, called the VX cycle, and then the CCNG is pumped up to high pressure (Figure 1). The high-pressure CCNG is warmed, using waste heat from the process, and expanded into compressed natural gas (CNG). The CNG is then blended with proprietary, nontoxic “proppant carrying foam,” which serves as the fracking fluid. VX units are containerized or trailer-mounted and mobile, and can be moved from site to site as necessary. Units from 6,000 gallons/day to 100,000 gallons/day are available. 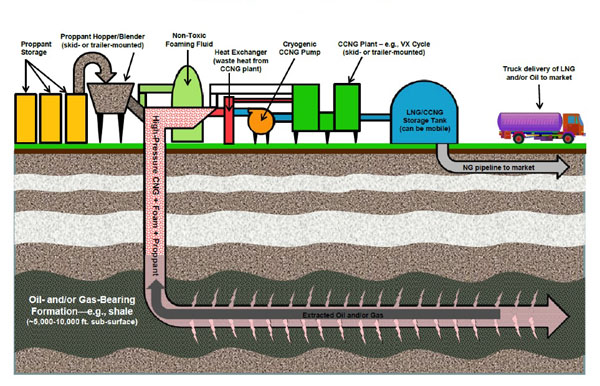 1. Rather than water, the VRGE process uses raw natural gas, converted to a liquid and combined with a proprietary mix of proppant and nontoxic additives, to fracture the gas- or oil-bearing shale rock. Courtesy: Expansion Energy

By using the fluid material available at the site, the process potentially eliminates all the infrastructure and complications posed by water, including sourcing (at some sites, massive amounts of water must be trucked in); importing, storing, and mixing fracking fluids; separation of fracking fluids; wastewater treatment; and disposal wells. Only the water that is freed up from the wells has to be dealt with, notes the company.

Thermal shock that can be induced by the fluid at the fissures potentially unlocks more natural gas. The process can also be thought of as a means of capturing natural gas at oil-producing sites that would otherwise be flared. Liquefied natural gas (LNG) can be trucked from the site economically if no pipeline service is available or is operating at capacity. Expansion Energy also claims that the overall energy consumption is lower compared to hydraulic fracking.