The low spot market price of natural gas (Henry Hub was $2.78/MMBtu on July 3) is up slightly from the recent historic low of $1.82/MMBtu experienced on April 20, but still very low from an historical perspective. The glideslope in natural gas prices began shortly after spot prices reached about $13.40 in July 2008 (historic peak prices reached just under $15.00/MMBtu in December 2005) and has since been sliding slowly downward.

The sustained low natural gas prices are having a predictable effect on the coal-fired power generation industry: Utilities with gas-fired reserve capacity are running those assets instead of their coal plants and natural gas–fired merchant plants have pushed coal plants out of the money in some regions. In fact, the most recent preliminary data published by the EIA found that April natural gas–fired and coal-fired generation each provided 32% of total U.S. generation (data released on July 6, Figure 1). Although this data is preliminary and subject to change, the EIA’s preliminary data has been very accurate over the years. 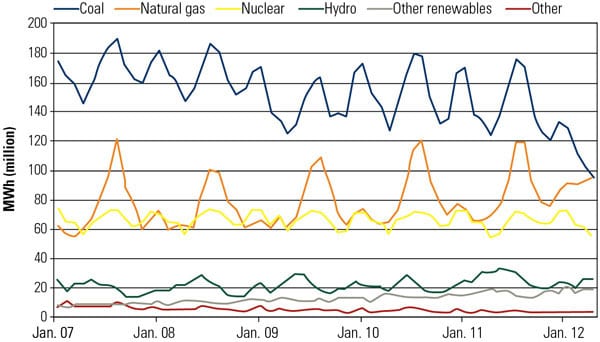 The reasons for this anomaly fall into two main categories. First, April was a relatively mild spring month with lower-than-expected electricity demand. Also, as described earlier, natural gas prices were at 10-year lows in April. The result was that coal’s share of total net generation was at its lowest level since at least January 1973 (the earliest date for which EIA posts monthly statistics).

Coal plants also have experienced other side effects from reduced generation. For example, coal stockpiles in March 2012 were about 196 million short tons, almost 18% higher than a year earlier and above the five-year range. Another valuation method is to look at days of burn or the number of days a plant can operate with the coal supply on site and without additional deliveries. In February, the average days of burn was almost 95 days, the highest level since 2008 when the EIA began collecting this statistic. In March, the statistic dropped slightly to 91 days. The rule of thumb is about 50 to 80 days of burn this time of year, so coal plants are operating at a lower capacity factor than predicted.

The lower burn rates are causing oversupply problems for some utilities. GenOn, a merchant generator, recently declared a force majeure event at one plant to reduce coal deliveries because their onsite storage facility was full. Other utilities, such as Duke Energy Indiana, are renegotiating or buying out coal supply contracts. Many utilities are adjusting to what they believe to be "new normal" plant operating practices.

Reduced coal consumption in the U.S. for power generation doesn’t mean that we should be shedding tears for coal mining companies—excess coal is being sent overseas. In fact, total coal exports (metallurgical and steam coal) are up 31% compared to 2010, to 107 million short tons, about 10% of U.S. production. Coal exports go principally (76%) to European (~54%) and Asian markets (South Korea, China, and India are the largest buyers, ~28%). Increased coal exports to Europe were in response to a 35% rise in natural gas spot prices there in 2011.

It’s curious that China’s coal mines produce more than 3 billion tons each year, more than the U.S., Russia, Australia, and India combined, yet China still buys coal from the U.S. and others to meet its 3.7-billion-ton annual demand, about three-and-one-half times the U.S. consumption and three times its 2000 demand. It seems that the lack of an adequate internal railroad infrastructure makes it more cost effective to buy and ship coal from the U.S. One source reports that China still moves almost 500 million tons of coal per year by truck! The proposed Gateway Pacific Terminal near Bellingham, Wash., would allow coal companies to export up to 50 million tons per year, and the proposed Longview port near Portland, Ore., sized to handle up to 60 million tons per year, are decidedly controversial projects.

The Environmental Protection Agency (EPA) is certainly treating the coal-fired power generation industry roughly these days. The Edison Electric Institute predicts 48 GW of coal plant closures through 2022 will result from the EPA’s regulatory actions against coal-fired plants. I have also written in the past about the link between announced coal plant closures and the coming EPA regulatory "train wreck." The train wreck is caused by politics and is possibly preventable (through the courts, or better, through congressional action) or reversible (through elections) in the long term.

Utilities that are "all in" with natural gas will eventually pay the price of relying on one-dimensional resource plans. The best-managed utilities will continue to promote coal-fired generation as a hedge against the inevitable rise of natural gas prices in the future. Until that time arrives, I hope that China leaves us some coal.