As a group, electric motors represent one of the best opportunities to save energy and reduce operating costs in a power plant. The U.S. Department of Energy (DOE) estimates that American industry could reduce by 11% to 18% the amount of electricity its countless motors require by switching to more-efficient models. The total energy and cost savings would be huge, as industrial motors are the largest end users of electricity in the U.S. Approximately 69% of the electricity consumed by industry (Figure 1) is used to power motors, 90% of which are AC induction motors. 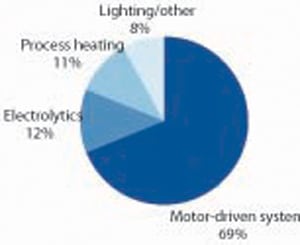 Electricity accounts for more than 97% of the lifetime cost of a motor. As a result, choosing a premium-efficiency AC motor, either to replace a failed motor or for a new application, is a smart move and a wise investment. Beware of vendors that describe their motors as “high-efficiency,” because the term is meaningless. The term “premium-efficiency” is now used to describe a motor that uses less electricity than most others on the market. Premium-efficiency motors are 2% to 8% more efficient than standard motors, for the following reasons:

Naturally, premium-efficiency AC motors cost more than standard motors (see below). But the cost differential can often be recovered in as little as one year, depending on the motor’s duty cycle and local electric rates. The reduction in consumption then continues year after year. Since motors usually last 15 to 20 years, over a premium-efficiency motor’s lifetime the savings can be substantial.

As mentioned previously, AC induction motors dominate the motor market. They are simple in design, inexpensive, and reliable, and their replacement parts are widely available. AC induction motors are available in single-phase or three-phase configurations and in sizes ranging from fractions of a horsepower to tens of thousands of horsepower. Some run at fixed speeds—typically 900 rpm, 1,200 rpm, 1,800 rpm, or 3,600 rpm. Others, with variable-frequency drives, operate at a wide range of speeds.

AC induction motors also are available in a range of efficiencies in each motor size class (Figure 2). The higher the horsepower, the higher the efficiency; most motors over 25 hp are more than 90% efficient. The Virginia-based National Electronic Manufacturers Association (NEMA) and the Canadian Standards Association (CSA) agree on what constitutes an “energy-efficient” motor—any model whose horsepower and efficiency ratings put it above the red line in Figure 2. The Boston-based, nonprofit Consortium for Energy Efficiency Inc. (CEE) defines the term a bit more stringently. Its standards (the blue line) are higher than those of NEMA/CSA. 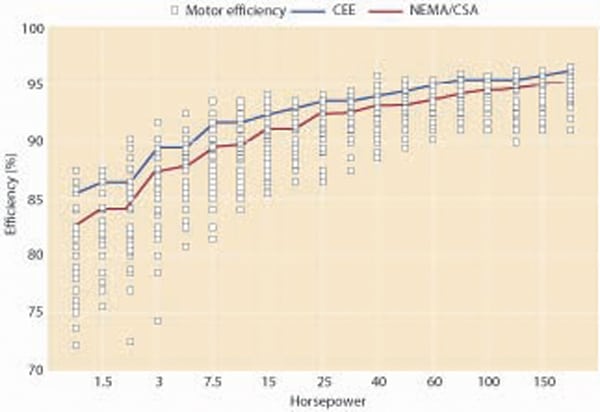 2. The Consortium for Energy Efficiency defines an “energy-efficient” motor differently and more stringently than the National Electrical Manufacturers Association or the Canadian Standards Association. Models above both the red and blue lines exceed all three groups’ definitions of “energy efficiency.” Source: Platts/E Source

One way that the CEE promotes energy efficiency is a program in which utilities can participate by offering rebates to their commercial and industrial customers for replacing equipment (such as motors and lighting) with more-efficient models. Such equipment is now being developed and sold by more vendors. For example, Baldor Electric Co. has improved the efficiency of more than 125 models in its line of Super-E AC motors rated from 1 to 500 hp to as high as 96%. All meet or exceed the efficiency required to qualify a buyer for a rebate under the CEE program.

State governments and the federal government also are promoting energy efficiency. One goal of the Energy Policy Act (EPAct) of 1992 was to reduce the amount of electricity consumed by various industrial and consumer products, including motors. EPAct required manufacturers to stop selling motors with rated load efficiencies below a specified minimum. What’s more, it gave the DOE the authority to prescribe energy efficiency standards, testing procedures, and labeling requirements.

Although many of EPAct’s provisions went into effect in the early and mid-1990s, motor manufacturers were given until October 1997 to comply with sections that mandated progressively higher efficiencies for higher horsepower. All general-purpose, three-phase induction motors between 1 and 200 hp were affected.

As a federal agency, the Department of Energy is doing its part to support Washington’s push to get U.S. industry to reduce its electricity consumption. To help convince users that buying energy-efficient AC motors makes economic sense, the DOE offers—free of charge—a software program called MotorMaster that calculates the potential savings from doing so. Powered by a database of specs and prices of 20,000 energy-efficient motors, MotorMaster is capable of doing very thorough economic analysis. Even better, it can serve as a motor management database for power plant managers who want to keep track of things like the maintenance records of all the motors in their fleet. The software can be downloaded from the MotorMaster page of the DOE’s Office of Industrial Technologies website.

Designed for use by facilities managers and technicians, MotorMaster analyzes motor system efficiency. Users can identify inefficient or oversized motors and compute the energy and demand savings that would result from replacing them with energy-efficient or premium-efficiency models. The software also can do energy conservation and lifecycle analyses and energy consumption accounting, and its hierarchical structure facilitates examination of a fleet’s energy efficiency on a plant-by-plant basis.

To put MotorMaster to the test, we asked it to compare the prices and operating costs of standard AC motors and premium-efficiency AC motors rated at 200 hp. The software quickly made two things clear: 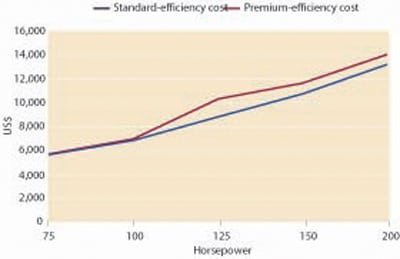 3. Even at high horsepower, the cost differential between a premium-efficiency and a standard-efficiency motor is less than 10% (less than $1,000). Source: Platts/E Source 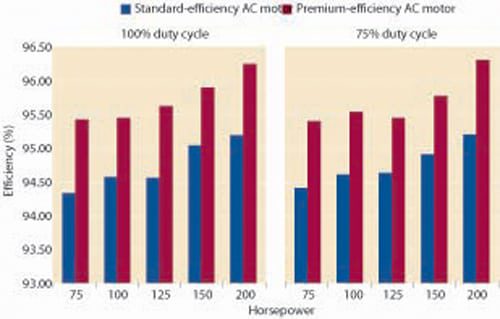 4. According to the DOE’s MotorMaster software, at either a 100% or 75% duty cycle a premium-efficiency motor is only about 1% more efficient than a standard motor. Source: Platts/E Source

However, MotorMaster also revealed that the drop in electricity consumption (and electricity cost) that would result from going with a premium-efficiency motor is significant. By replacing a standard, 200-hp motor that works at a 100% duty cycle with a premium-efficiency model, a plant could expect to see a reduction in its annual electric bill of $15,000 (Figure 5). Since a motor of that size costs only about $14,000, it could pay for itself in less than one year. According to MotorMaster, motors that run all the time—the norm in baseload power plants—have an average payback time of less than two years (Figure 6). 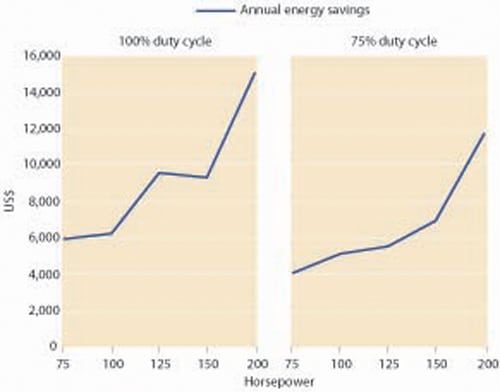 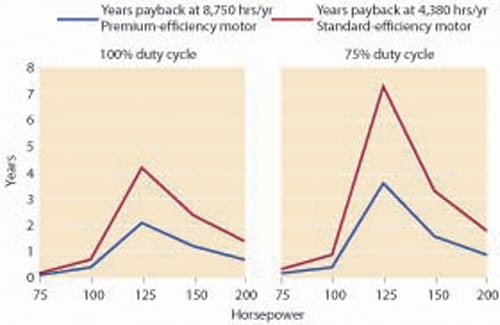 6. In most cases, premium-efficiency AC motors pay for themselves in less than two years. Source: Platts/E Source

MotorMaster’s ability to compare prices, efficiencies, payback periods, and other important data should appeal to any power plant or facilities manager responsible for keeping a fleet of motors humming. Likewise, the software’s number-crunching prowess should appeal to technicians who do efficiency calculations on a regular basis. Of course, one can always compute efficiency and savings the old-fashioned way, as follows.

If a motor operates at constant speed on a regular basis, calculating the savings that upgrading to a more-efficient model would yield is a straightforward exercise. Just replace the variables on the right side of this equation with your values:

Repairing old motors is not necessarily cost-effective. But replacing them requires more than just writing a big check. To minimize the lifecycle costs of a motor system, plant managers should do the following.

Consider a Whole-System Design. The full potential of purchasing a premium-efficiency AC motor can best be captured if it is integrated into an optimized drive power system. Although this may be difficult to do in retrofit applications, it is important when designing new systems where all components can be sized correctly from the get-go. Optimized motor systems often use less than half the energy of systems designed with standard rules of thumb. Selecting efficient, properly sized models of the equipment the AC motor will drive (pumps and fans, for example) also improves the overall efficiency of the drive power system. Selecting the right controls for motors and the equipment they drive, and then making sure that their belts are aligned and correctly tensioned once they are put into service are two other ways to maximize the efficiency of a drive power system.

Purchase the Right Size Motor. Motors are most efficient between about 60% and 100% of their full-rated load, and are very inefficient below 50% loading (Figure 7). As a result, simply buying the right size motor can increase efficiency significantly. Interestingly, about one-third of the motors in the field are so oversized that they operate below 50% of their rated load most of the time. Oversized motors not only operate inefficiently, but they are also more expensive than the correct size motor, and they can contribute to reduced power factor, which increases the load on the electrical system. 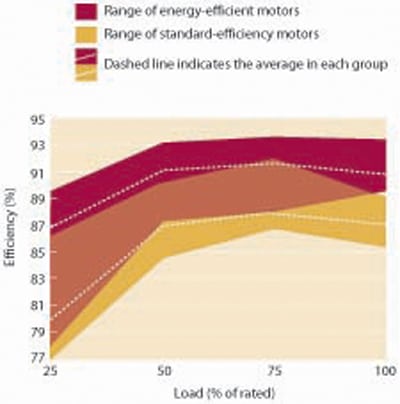 7. For both classes of motor, efficiency remains fairly constant between 50% and 100% of rated load. But it is much lower below 50%. Source: Platts/E Source

Consider Switching to Adjustable-Speed Drives. Adjustable-speed drives (ASDs) internally vary the voltage and frequency of the alternating current driving their motors. By enabling dynamic matching of motor speed to varying load requirements, ASDs can substantially reduce a motor system’s energy consumption. ASDs can also improve a system’s power factor (PF) and provide other benefits such as soft-starting and overspeed capability.

Investigate the Motor’s Impact on System PF. A motor system’s PF is an indicator of how much of its capacity is available for productive work. A low power factor is undesirable because it increases the load on the plant’s electrical system, and a motor’s PF is lower when it is lightly loaded. For this reason, an AC motor’s PF is an important selection criterion. If it is low, adding PF-raising capacitors is a wise move. If they come with the motor, periodic checks to ensure that they are working make good sense.

—This article is a revised and updated version of an article published in the June 2003 issue of POWER.