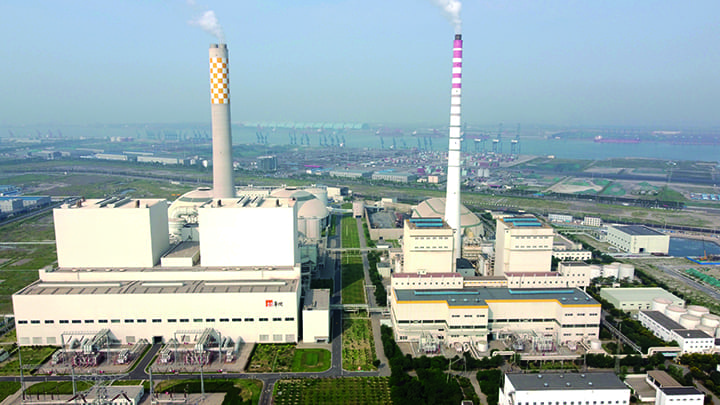 Coal power may be struggling in some parts of the world, but it’s doing just fine in China. New plants are coming online featuring state-of-the-art technology. Two ultrasupercritical units added at the Caofeidian power station showcase a number of innovative efficiency enhancements.

While coal power plants are being closed for environmental or economic reasons in many parts of the world, some Asian countries, including China, India, and Indonesia, are building large numbers of new coal-fired units. In fact, as Mary Hutzler, a distinguished Senior Fellow at the Institute for Energy Research, points out in her article titled “China’s Economic Recovery Will Be Powered by Coal,” China has plans to build more than 200 GW of new coal-fired generating capacity. That’s nearly the same capacity that the U.S. has in its entire existing coal fleet. Hutzler wrote, “Between March 1 and March 18, 2020, authorities in China permitted more coal-fired capacity for construction (7,960 MW) than they did in all of 2019 (6,310 MW).” Add that to the more than 1,000 GW of existing coal-fired capacity in China and it’s easy to surmise that coal is still king in the world’s most populous country.

But China’s new units are not your grandfather’s coal power plant; most are state-of-the-art ultrasupercritical (USC) units. And Chinese engineers have been pushing efficiency limits to new heights through ongoing research and development. The Caofeidian project offers a case in point.

“The highlight of this project is that, as single reheat, with a series of innovations, it achieves a net efficiency of higher than 46.2% [lower heating value basis] under 75% THA [turbine heat acceptance], which is the best level of existing 1,000-MW double-reheat USC units under 100% THA in China. While, the total investment of this project is only about 85% of that of the double-reheat projects,” Li Li, an engineer with Shanghai Shenergy Power Technology Co. Ltd., told POWER.

The Caofeidian power station is located in the Caofeidian Industrial Zone, about 70 kilometers south of Tangshan City, Hebei Province, China. The project was built under strict adherence with China’s environmental protection policy; notably, the facility was constructed on land reclaimed from the sea and it uses desalinated seawater for plant needs.

Hebei Electric Power Survey and Design Institute performed all investigation and design work for the project. Shanghai Shenergy Power Technology Co. Ltd. was responsible for all of the process design consultation for the project and the implementation of relevant energy-saving projects. A number of other contractors were selected for equipment procurement and construction based on public bidding in accordance with the provisions of China’s bidding law. 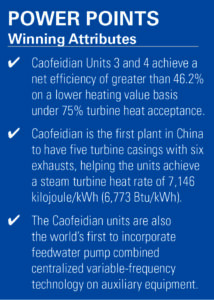 During the peak of construction, there were more than 4,000 workers directly involved in the project. From the start of construction to the completion and operation of the two units on June 9, 2020, the construction team reported no “general or above” safety production accidents. A total of 1,635 days of safe production work was achieved.

The Caofeidian project included a number of first-of-a-kind technologies. The steam turbine offers one example (Figure 1). The Caofeidian units are the first in China to have five turbine casings with six exhausts. Remarkably, the steam turbine heat rate is 7,146 kilojoule/kWh (6,773 Btu/kWh). The design, which includes an 11-stage recuperation system, makes full use of the low seawater temperature in the region, resulting in ultra-low backpressure of 3.3 kilopascal absolute (0.48 psia). Deep-water extraction technology also aids in the process. By reducing the water intake depth from –5.8 meters (m), which was the original design, to –10.0 m, the seawater temperature was reduced 1.5C from May to June and 1.8C from July to September. The reduced backpressure provides an estimated fuel cost savings of about ¥3 million ($428,500) per year.

The Caofeidian units are also the world’s first to incorporate feedwater pump combined centralized variable-frequency technology for auxiliary equipment. In this scheme, the feedwater pump turbine also drives a frequency conversion generator to provide frequency conversion power for the comprehensive auxiliary machines, such as pumps and fans. To enhance performance, engineers incorporated a small Siemens steam turbine into the design and equipped units with Voith high-speed clutches. The technology reduces the power consumption of the plant by about 2%.

Additional energy-savings and emissions-reduction technology was also utilized on the project. Engineers performed in-depth technical optimization; expanded the traditional regenerative mode to factor water, wind, coal, and other boiler heat source inputs into calculations; and recoupled the machine and furnace to ensure efficient operation down to 40% load. A high-pressure heater was added to ensure feedwater temperature stability, and to solve problems during low-load conditions when the denitration system cannot be operated. As a result, denitration is achievable over a wide operating load. Meanwhile, the installation of hot air heaters protects the high-pressure heaters from overheating, and increases the combustion efficiency and stability. All of the aforementioned pioneering technologies were consulted or directly implemented by Shanghai Shenergy Power Technology.

As previously mentioned, Siemens and Voith supplied equipment from Germany for the project. However, this complicated matters due to Chinese policies and documentation requirements. For example, correspondence related to the small Siemens steam engine installation and commissioning included 800 pieces of mail. The general manager of the project company personally took the lead, and a “baby turbine” team composed of the owner, construction manager, translator, Shenergy Power Technology, and Siemens was established. All parties had difficulties to overcome, causing it to take 32 days to complete the debugging and transfer of the Unit 3 small steam turbine. Notably, it took only 10 days to transfer the baby turbine for Unit 4 due to the lessons learned.

The Caofeidian project’s piping system is more complicated than a conventional thermal power plant design. There are many additional extraction and heating devices in the 11-level recuperation system. Although the design of the four major pipelines was continuously optimized and revised, problems such as supply lag and pipeline collisions still occurred.

The team held a special meeting on Jan. 5, 2018, to sort out the problems. For design issues, it was decided that the responsible engineer would be stationed on the spot and problems dealt with as soon as possible. In order to ensure the supply of materials, the team leader was urged to station an intermediary at Huadian Jinyuan piping factory to link the production, transportation, and installation. Soon after the meeting, lifting of the four major pipelines resumed on Unit 3. “Due to the early deployment, compact arrangement, and implementation in place, the construction quality and progress of the final four major pipelines were controlled and effective,” a plant leader said.

Many outsiders may think China has lax emissions standards, but that’s not the case. A highly efficient electrostatic precipitator with circular flue is connected to each unit. The system includes a four-level electrostatic field plus one-level rotating polar plate, resulting in dust removal efficiency of not less than 99.95%. The dust content at the outlet of the device is less than 25 milligrams/standard cubic meter (mg/Nm3).

The Caofeidian project achieves desulfurization efficiency of greater than 99.2% and dust removal efficiency of more than 75% in one absorption tower through the adoption of double-layer tray, five-layer spray, and high-efficiency demister technology. The system meets China’s ultra-clean emission requirements, which are less than 35 mg/Nm3 for SO2 and 10 mg/Nm3 for dust.

Lastly, a large ash storage facility was constructed using 200,000 tons of steel plate to replace the open-air ash yard. This completely eliminated the environmental pollution of the open ash yard, and saved about 400 acres of land.

Napolean Bonaparte is said to have called China “the sleeping giant.” When it comes to coal power, China is a giant, but it’s not sleeping—the country is pressing forward with new plants and innovative technology. POWER recognizes the ingenuity on display at the Caofeidian plant by bestowing upon it a 2020 Top Plant award in the coal-fired category. ■