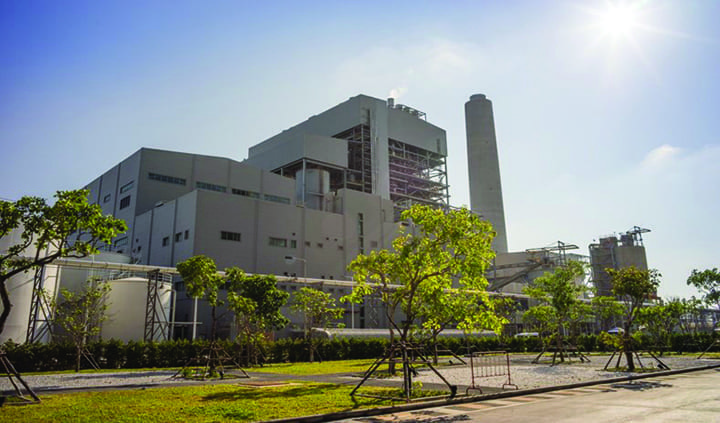 It sounds kind of strange, but you don’t always know, what you don’t know. That was the case at a Thai coal plant. When it started burning Indonesian subbituminous coal, operators didn’t know how dusty the fuel could be or how easily it could self-combust. Once they realized the issues, they got experts involved to help them create a Top Plant award-winning facility.

Thailand is a Southeast Asian country about twice the size of Wyoming with a population exceeding 68 million people. It’s a fairly modern nation with all citizens having access to electricity, but it’s probably not where you’d expect to find one of the best-operated coal-fired power plants in the world. However, that is the case.

GHECO-One is located in Rayong on the Gulf of Thailand, about 175 kilometers southeast of Bangkok. It is a 700-MW, supercritical unit, with a Doosan Babcock Posiflow boiler. The low-mass-flux design is front-rear wall-fired with 30 burners. The plant has six Loesche LM28.3D, pressurized, three-roller, coal-grinding mills and dynamic classifiers—a system Randy Rahm, president of CoalTech Consultants and executive director of the Powder River Basin Coal Users’ Group (PRBCUG, which is now known simply as the CUG), has called the “Rolls-Royce of pulverizers.”

The plant has a Doosan G2 tandem compound steam turbine with one high-pressure-intermediate-pressure casing and two low-pressure casings. The generator has a water-cooled stator and hydrogen-cooled rotor. It utilizes a Honeywell Korea distributed control system and a GE Mark VIe steam turbine controller. The unit also has selective catalytic reduction to reduce NOx, an electrostatic precipitator to remove particulate matter, and a seawater flue gas desulfurization (SW FGD) system to limit SOx. The use of a SW FGD was driven by a desire to avoid the more-typical, limestone-based, wet-FGD scheme and minimize raw water consumption.

Coal Is Coal … Not

GHECO-One was constructed for Glow Energy PCL, which has been owned by several different companies over the years. When the plant was built, Glow Energy had experience with coal-fired boilers; it operated a few circulating fluidized bed units. However, those plants burned Australian bituminous coal. GHECO-One, on the other hand, burns Indonesian, low-sulfur, subbituminous coal. The difference posed a major challenge for the facility.

“We knew nothing about it,” Lou Holub, senior vice president at GHECO-One, told POWER during an interview at the PRBCUG Educational Summit, co-located with the ELECTRIC POWER Conference and Exhibition, in Las Vegas, Nevada, last year. “We just thought coal is coal,” he said.

But, Indonesian subbituminous coal, which is similar to PRB coal found in the U.S., is far different than bituminous coal. It is a much dustier fuel, and it is prone to self-combustion when allowed to sit for extended periods.

“Almost immediately when we started receiving the coal, we started having self-combustion because we were allowing the coal to sit too long,” Holub said. Furthermore, there was significant spillage and insufficient manpower on-site to clean it up.

Holub recalled walking into the plant one morning and smelling smoke. The crew began searching for the source, starting around the coal mills. Word was passed across the plant radio system and operating personnel spread out to look in other areas. What they found was a flash fire in transfer tower number two from spontaneous combustion.

“It was rather significant, because transfer tower number two is the heart of the plant,” Holub said. “It’s the tower where all of the belt systems come together.”

The local fire department was called, but it took hours for them to arrive on the scene. Fortunately, the in-house responders were able to adequately combat the fire, using water hoses—it didn’t have F500 firefighting systems at the time. “That was the wake-up call,” said Holub.

The incident occurred in 2012. GHECO-One’s leadership knew they needed help and began searching for experts. As fate would have it, the Asian Subbituminous Coal Users’ Group, an offshoot of the PRBCUG, was having a meeting in Hong Kong shortly after the fire, and Holub immediately made reservations for he and a colleague to attend. It was the best thing he could have done.

“We met Randy Rahm. We met Ron Pircon [CEO of Benetech]. We met Bob Taylor [president of CoalSAFETY Inc.]. I never felt such relief—almost a monkey coming off my shoulders. We realized, ‘We’re not the only ones and there are people out there who understand this. We’ll get some help,’ ” Holub said.

The improvements didn’t happen overnight, however. As is the case at most plants, budgets had to be developed and approved, and an approach had to be implemented to address the most-pressing issues through a systematic process. GHECO-One contracted with Benetech to conduct surveys and audit the facility. Then an action plan was developed.

“We had an outage coming up, so we started looking at engineered solutions to address urgent problems,” said Holub. “It was really, really fast paced at first. We had two trains going: one was the material engineering upgrades on the coal-handling system and the other involved safety-related items.”

The environmental health and safety manager took the lead on safety aspects. Operations and maintenance managers handled other pieces. A behavioral-based training program was instituted and the plant culture began to improve as well.

The original coal-handling system was designed in accordance with international standards, specifically DIN 22101, but that focused mainly on loose bulk materials and addressed things such as drives, brakes, and take-up devices. Dust control was managed with a single tower vacuum system, and there was no dust or coal spillage criteria stipulated.

Benetech directed GHECO-One to some additional references, such as National Fire Protection Association (NFPA) and American Society for Testing and Materials (ASTM) standards, and helped the team better understand PRB coal-handling best practices. With the new knowledge, upgrades were scheduled. Among improvements made in the coal yard were enclosing the coal conveyor system; installing telescopic chutes on the tipper car; compacting coal piles; adding a 15-meter-high wind shield around the yard; reducing the coal pile height to less than 15 meters; planting a three-layer tree fence around the outside of the wind shield; and redirecting water drainage from the yard. The upgrades were so successful that the Thai government later adopted the GHECO-One design as its minimum standard for new coal yards constructed in the country (Figure 1).

Many improvements were made in the plant as well. Among them were installing semi-automatic water washdown systems; a CO monitoring system; engineered chutes and load zones; new skirting and belt supports; dust suppression systems; and wet dust extractors. As a result, dust and coal spillage was greatly reduced, and manpower requirements were also lessened. 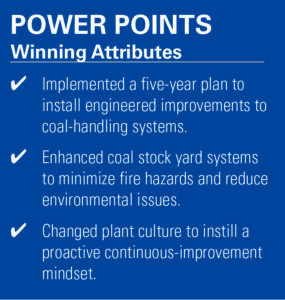 A Culture of Continuous Improvement

And although the improvements set the table for a Top Plant award, it didn’t end there. Perhaps the most important change was made in the workforce culture. “We had the procedures, the processes, and the programs, and then it comes back to culture,” Holub said. “We began to work on the behavioral side, really leading by example and providing reinforcement training—not just accepting the status quo. The key thing is not to be victims of circumstances, but to deal with the issues, get it right, move forward, and not repeat mistakes. It’s really paid off. When people see that you’re making the investment—you’re making the technical improvements—it reinforces the continuous improvement mindset and it all comes together.”

Rahm agreed. “We do upgrades all over the world,” he said. “When you do upgrades, what often happens is, it’s nice and clean for a time, but they don’t maintain it. The big thing at GHECO-One—what sets them apart—is they have maintained it. If you go in there right now, you’re going to see the same thing it was three years ago, because it’s the culture of the plant. I tell people, don’t look only at the upgrades, but see how they changed the culture to hold people accountable and maintain the equipment. If something’s not working properly, they fix it.”

GHECO-One is not a typical Thai coal power plant. When asked what made this plant special, allowing the changes to take place, Holub responded, “Necessity. It was a necessity. I had the right guys, and we all had a similar vision. We wanted this plant to be a model. We wanted it to be a showcase for Glow. The idea was, ‘We can do coal. We can do clean coal. It doesn’t have to be dirty.’ We took that idea and went forward with it.”

Another key was having strong support from company executives. The team made the business case that a clean and safe plant would save money in the long run and they have proven that to be the case. As such, GHECO-One is a well-deserving POWER Top Plant. ■