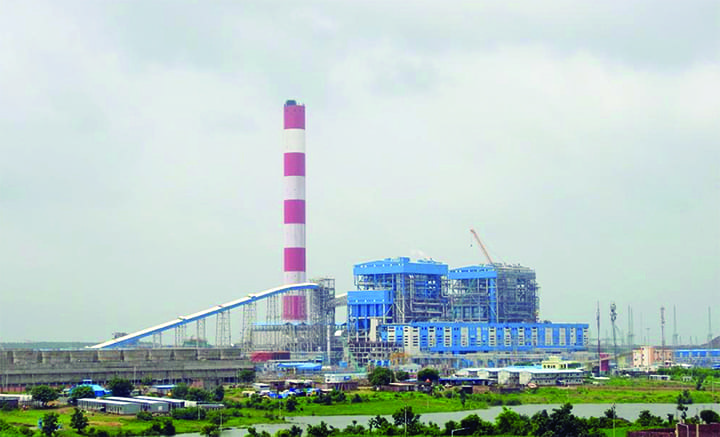 Technology development is embedded in NTPC’s foundation. When it was established in 1975, the company, then known as “National Thermal Power Corp.,” was wholly owned by India’s central government, and its key priority was to accelerate power development for the sprawling nation. While nearly all its efforts over the past four decades have been focused on building coal power plants and related infrastructure—mainly because India holds the world’s fourth-largest reserves of coal—in 2005, after the government launched an initial public offering to reduce its stake in NTPC to 89.5%, the company shifted gears and began diversification, foraying into hydropower, renewables, and even nuclear.

The government’s stake in the company today is 51%, but the company is a “maharatna” company—a special designation which means it has greater autonomy from the central government in decision-making. Furthermore, the designation allows NTPC to incur unlimited capital expenditures, enter into joint ventures or strategic alliances, and restructure or raise debt from capital markets. This also has allowed the company, which currently has a fleet of 62 GW, to explore new directions for its business. By 2032, for example, NTPC wants to vastly expand its portfolio to 132 GW. While it expects non-fossil-fuel-based generation will grow into a substantial 30% of its portfolio, coal power will still occupy a hefty 65% share, it said.

However, in the future, the company expects its coal fleet will be far more efficient than its current fleet, and it is exploring several avenues to ensure this happens. NTPC also said it has gained valuable experience customizing early imported technologies to fit the unique conditions of Indian coal, which is mostly bituminous with relatively low moisture but a high ash content of between 30% and 50%. (Comparatively, coal traded on the international market rarely exceeds 15% ash content.) In the 1990s, for example, India established a full domestic value chain, from design to construction and operation, for subcritical plants, and in recent years, it has expanded plant sizes while reaching supercritical temperatures.

In August 2019, it marked a new evolution in its quest for high-efficiency low-emissions (HELE) installations when it commissioned the nation’s first of two 660-MW ultrasupercritical (USC) units at the Khargone Super Thermal Power Plant in the state of Madhya Pradesh. This March, it commissioned the second unit at the pioneering plant.

Khargone cements NTPC’s ambition to ensure future plants feature USC steam parameters of 600C (1,112F) and pressure of 270 kilograms per square centimeter (kg/cm 2, 3,840 psi), allowing them to consume less coal to produce as much power as supercritical units. USC units increase the efficiency by about 8% over that of a conventional subcritical 500-MW unit and 3% over conventional supercritical units using similar coal, the company said. USC parameters also help in the reduction of environmental pollutants, including carbon dioxide, nitrogen oxides, and sulfur dioxides. Khargone, specifically, helps reduce carbon emissions intensity “by around 8% when compared to conventional subcritical power plants for every unit of electricity generated,” the company said.

But for NTPC, the efficiency gains are also significant because it may help save coal. The Khargone USC units use 7.65 million tons per year of coal with a sulfur content of up to 0.5% and an ash content of between 40% and 43%, NTPC said. The plant sources its coal requirement from the newly opened Pakribarwadih captive coal mine in Jharkhand state, about 900 miles away.

Construction of the first-of-its-kind project in India progressed mostly to plan, NTPC said. After the company received environmental clearances in March 2015, it signed a turnkey engineering, procurement, and construction (EPC) contract valued at 55.8 billion rupees ($760 million) with Indian conglomerate Larsen & Toubro Ltd. (L&T) in April 2015. In July that year, NTPC began site preparation at the remote 715-hectare site near the Selda and Dalchi villages in Khargone district in Madhya Pradesh. The first unit was commissioned in July 2019, after which it operated in a trial run until September 2019.

Khargone was L&T’s first USC project. As L&T subsidiary L&T Power’s CEO and Managing Director Shailendra Roy noted in a statement, though the novel project took nearly four years to complete, NTPC made the right decision to contract with an EPC firm for the massive project. “Of late, NTPC and other state utilities are preferring the EPC route for execution of big power projects as the projects set up earlier on multiple split packages have seen enormous delays due to complexities in coordination, interface issues, absence of single point responsibility, etc.,” he said.

In addition to building the plant, NTPC met a long list of environmental clearances set by the Indian government for Khargone. These include installation of a rooftop solar plant, ensuring the 275-meter-tall flue stack was outfitted with a continuous online emission monitoring system, and that the plant was equipped with high-efficiency electrostatic precipitators with a guaranteed efficiency of 99.97% to keep particulate emissions well below regulated limits. 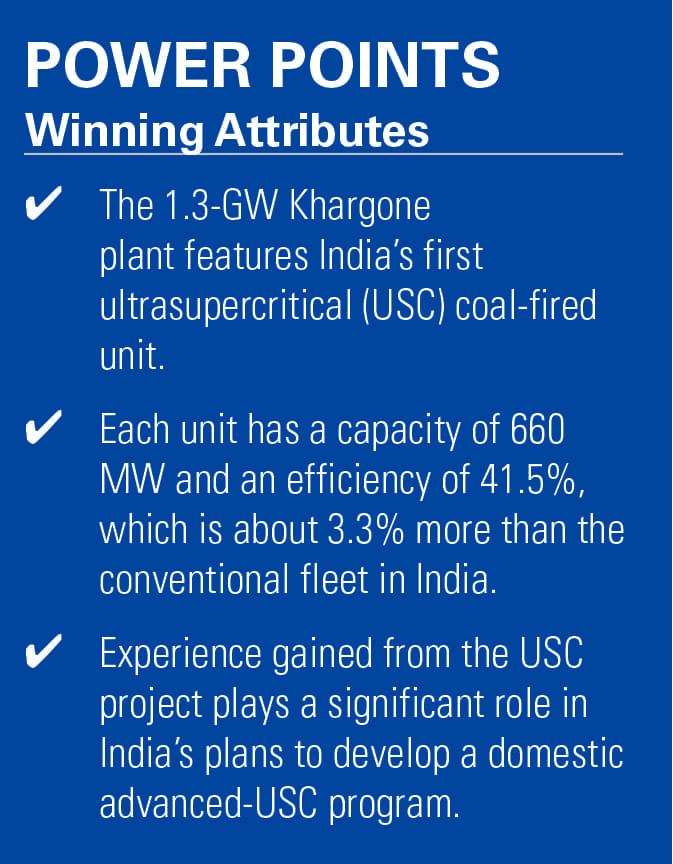 NTPC also designed an effluent management program to treat all wastewater generated by the plant. It committed to zero discharge, and to reduce and optimize water quantities and effluent generation. The company is also using a dry ash extraction system installed along with storage facilities to supply ash to the cement industry, but it has two different systems for ash disposal: a conventional wet slurry disposal system with ash water recirculation for bottom ash, and a high-concentration slurry disposal system for fly ash. Finally, NTPC has committed to develop infrastructure for neighboring villages, including internal roads and solar street lights, as well as drinking water and educational facilities.

With Khargone completed, NTPC will focus efforts on new USC projects underway in North Karanpura and Telangana. Meanwhile, it is gleaning experience from building and operating Khargone to extend its HELE efforts and develop a program that aims to build an 800-MW coal-fired advanced USC (A-USC) power plant using indigenous technology at its Sipat facility in Chhattisgarh state—the site of the company’s first supercritical plant. The program is being led by NTPC, major equipment manufacturer Bharat Heavy Electrical Ltd., and state research entity the Indira Gandhi Centre for Atomic Research.

Officials noted that while the pandemic has delayed progress, plans continue to develop steam parameters of 310 kg/cm 2 (4,409 psi) and temperatures of up to 720C (1,328F). “Such parameters are way higher than steam parameters used in contemporary plants globally and would result in top of line efficiency of 46%,” the company said. “This is [a] sharp increase from the contemporary efficiency levels of 38% (subcritical units) and 40% (supercritical units). It will result in reduction of CO 2 emissions to the tune of 20% compared to a subcritical plant.” ■