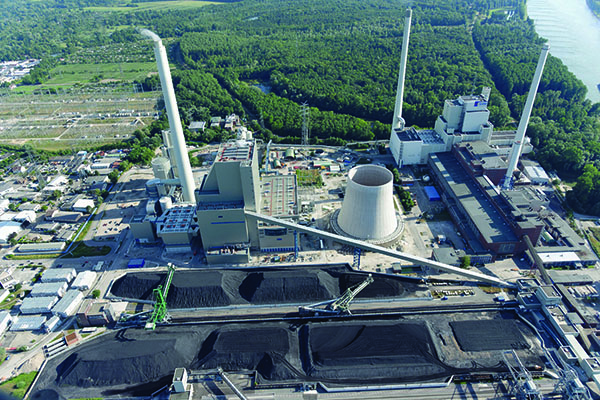 Efficiency has become the mantra of modern coal power. The 912-MW hard coal–fired RDK 8, a unit that operates in Germany’s challenging power market, achieved a 47.5% net thermal efficiency through technology and optimization—and today, it is one of the world’s most-efficient coal-fired steam power plants.

Profitable and reliable coal power operation has become challenging nearly everywhere in the world, but in Germany, it is beset by extraordinary pressures. As the industrial heavyweight’s ambitious energy transition—Energiewende—to a low-carbon and nuclear-free energy supply heaves on, the country, which is also one of the European Union’s (EU’s) core member states, has cemented its place at the forefront of the bloc’s climate change mitigation efforts. Targets set in 2007 commit Germany to slash its greenhouse gas (GHG) emissions by 95% in 2050, compared to 1990 levels. By mid-century, it wants renewables to make up a minimum 80% share of the country’s gross power consumption. And earlier this year, a federal commission rolled out a road map to move the country—which relied on lignite and hard coal for 38% of its generated power in 2018—beyond coal by 2038.

The measures have left German utilities acutely concerned about their climate impacts, energy reliability, and bottom lines. But, as Energie Baden-Württemberg AG (EnBW)—a publicly traded electric utility that is headquartered in Karlsruhe, Baden-Württemberg—exemplifies, staying afloat requires a balanced approach. In its March 2019–released integrated annual report, the company described a business overhaul that would boost investments to procure more renewables and holdings in the grid but vastly shrink its conventional generation portfolio. Plans include shuttering its two nuclear reactors—which produced about 39% of the company’s total generation in 2018—by 2022 per the country’s nuclear phase-out policy. Brown coal generated 11% and hard coal 24%, but its coal plants were increasingly playing a backup role, and their profitability was tempered by the volatility in power prices and volumes, it said. 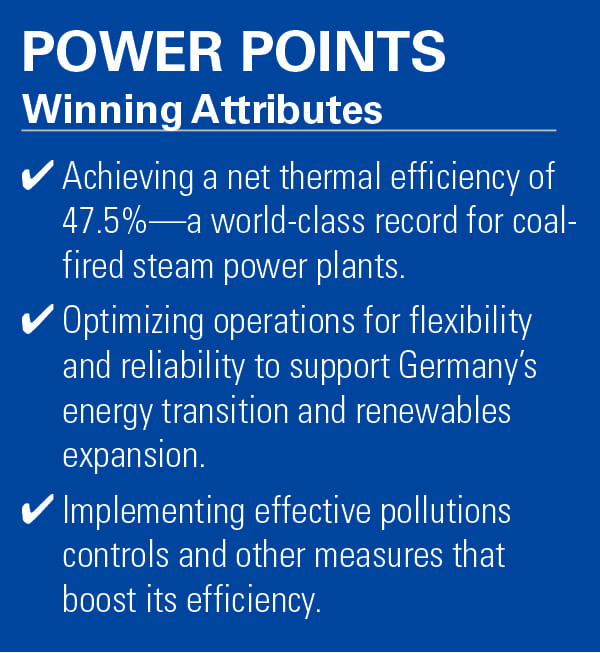 Still, EnBW reported in October 2018 that its CO2 intensity fell by 3.6% to 556 g/kWh compared to the previous year. It pegged that achievement to generation of more renewable power and utilization of a “more-efficient mix” of fossil fuel–fired power. The workhorse of its conventional fleet—the most “reliable partner in the further expansion of renewable energies,” it said—was the Rheinhafen Dampfkraftwerk Block 8 (RDK 8). The 912-MW unit in Karlsruhe began commercial operation in December 2013 after a lengthy and challenging construction period, it noted, but today, the unit demonstrates a net thermal efficiency of 47.5%—the highest at any coal plant in the world.

Building for a Changing Market

Deliberations to add the eighth block to the Rheinhafen steam power plant began in 2005, when Units 1 and 2 (64 MW each) had long been shuttered, the oil- and gas-fired Units 5 and 6 (175 MW each) had been in cold reserve since 1993, and an extensive retrofit was in planning for the 1985-built 550-MW Unit 7. Market conditions for new coal in Germany were vastly different then. Despite newly announced carbon goals, the nation urgently needed new baseload power plants to shoulder the annual peak load, and coal economically fit the bill.

“EnBW decided to build RDK 8 to allow its generation portfolio a better competition position on the German electricity market,” Dr. Georgios Stamatelopoulos, senior vice president of Generation at EnBW, told POWER in July. “The expansion of renewable production in Germany brought additional requirements in terms of operational flexibility and low generation costs,” he noted. “The design of RDK 8 as a highly efficient coal-fired power plant was the best way to meet the requirements for cost-effectiveness, operational flexibility, and climate/environmental protection.”

EnBW ultimately contracted the power plant in several lots; the biggest one was awarded to Alstom (which is now part of General Electric [GE]) for engineering, procurement, construction, and erection of an ultrasupercritical (USC) steam power block, including the steam generator, mills and firing system, steam turbine with turbogenerator (Figure 1), and the water-steam cycle. Other significant lots were for the air quality control systems, awarded to Andritz Energy & Environment; the main transformers, and instrumentation and controls, awarded to Siemens; and the cooling tower, contracted to Hamon and Alpine.

Especially attractive for EnBW was that USC technology promised a leap in thermal efficiency for hard coal to above 46%. When the plant began commercial operation, however, EnBW confirmed the plant’s efficiency was even higher. “The high efficiency of 47.5% is mainly due to the high steam parameters of 600C/620C [1,112F/1,148F] at the turbine entrance, the newly developed materials—for example, T24, VM12, and 25% [chromium]-austenitic materials—the use of a new turbine blade to increase the internal turbine efficiency, and low condenser pressure due to continuous cooling with [Rhine River] water,” Stamatelopoulos explained.

The unit’s high efficiency has a two-fold significance: One is that it helps the plant achieve a “very low specific CO 2 emissions of only 740 g/kWh,” Stamatelopoulos said; and as GE pointed out, it helps save an estimated 275,000 tons of coal per year, compared to the global average conventional coal-fired fleet.

Also notable are the unit’s NOx emission controls, which feature multiple layers. To supplement the “optimum combustion process,” which limits production of NOx and carbon monoxide, a selective catalytic reduction plant installed downstream of the boiler further slashes NOx. An electrostatic filter then ensures particulates in the flue gas are “almost completely separated, and a wet scrubber in the flue gas desulfurization plant removes sulfur dioxides.” The purified flue gas is discharged into the environment via a 230-meter (m)-high stack, and the fly ash, gypsum, and boiler ash are recycled in the building materials industry. “The efficiency of the entire system is increased by the use of a so-called wet stack without the re-heating of flue gas,” said Stamatelopoulos.

As interesting is a 1.8-MW bulb turbine, supplied by Andritz Hydro, that is installed in order to harvest hydropower from the cooling water return of the plant. The concept exploits the 8.3-m average height difference between the turbine level and the Rhine River. “In order to be able to use this energy, the gravity-fed basin has been integrated in an innovative way into the vertical duct of the cooling tower. The water turbine, which has been designed as a bevel gear bulb turbine, is integrated into the cooling water return duct just before the outflow to the Rhine River. A bypass line enables the operation of the power plant, even if the water turbine is not available,” Stamatelopoulos explained.

Finally, part of the plant’s steam is also used to feed the city of Karlsruhe’s district heating network. “The combined electricity and heat generation with a district heating decoupling of maximum 250 MWth additionally reduces the wasting of unused energy into the environment,” he said.

Despite its world-class efficiency, EnBW continues mulling upgrades to keep the unit’s power marketable. For example, to boost its flexibility and adapt to the high influx of intermittent renewables that were encouraged under Energiewende, the company optimized the unit to run at a low partial load of 15%. “During the optimization phase, we figured out that when operating with a single coal mill, a significantly higher operating stability is achieved than in operation with two mills, both running in lower partial load,” Stamatelopoulos said, noting that RDK 8 has four mills, one per burner level. “However, the transition from once-through operation of the steam generator to forced circulation requires adequate time for the thick-walled components to adjust their temperature in a lifetime consumption–friendly manner,” said Stamatelopoulos.

The Pains of a Pioneer

Construction of the plant kicked off in March 2008, but it was hardly smooth. One hurdle EnBW and the manufacturers faced was a shortage of “production and erection capacities” because so many other power plant projects were underway at the time in Europe. “For this reason, engineering and manufacturing had to be subcontracted worldwide—so the planning and manufacturing of the boiler steel structure was split between Europe, Canada, and Asia. This required additional effort and close coordination in quality management, interface processing, and logistics,” Stamatelopoulos said.

Another challenge involved the use of newly developed materials, such as T24, a ferritic/bainitic-martensitic steel, for the evaporator tubes of the steam generator. “In order to meet the high-quality requirements, great efforts in manufacturing and erection, and intensive coordination between the manufacturer (GE), control system (Siemens), flue gas cleaning (Andritz), EnBW, and the third-party supervision were necessary,” he said. These hurdles also resulted in additional costs. Meanwhile, five days after the unit was first synchronized to the grid in August 2013, a fire broke out at a hydraulic station in the turbine hall, and damage put the project behind schedule by three months. But recovery was speedy. “The subsequent repairs were significantly shortened by the highly professional work of post-fire cleaners and suppliers” who “worked in multiple-shift operation around the clock,” he noted.

Today, however, the plant functions as designed. Owing to its high efficiency—and resulting low, stable operating costs—the unit has been used in the “upper mid-load range,” running at about 6,600 hours over the last two years (and 20,828 hours since commercial operations began). Unplanned capacity losses stood at about 8%, EnBW said. The flue gas cleaning systems are also working remarkably well. “In 2018, the approved emission limits were constantly kept and always lower than the approved ones,” Stamatelopoulos said. Meanwhile, compliance with new stringent pollutions limits for large combustion plants set under the EU’s Industrial Emissions Directive by 2021, will likely require only “minor retrofitting measures,” he noted. ■