SO3 is formed as a by-product during the combustion of fossil fuels for power generation and is also used or produced in many industrial processes. At temperatures below about 200C, SO3 combines with water vapor to form sulfuric acid, which has harmful effects on plant surfaces and on the environment. SO3 also creates a visible blue-white plume at concentrations as low as 3-4 ppm and is often detectable on an opacity monitor.

In addition to the many plants that have installed SCR/FGD systems over the past decade or so, SCRs serving another 150 GW are expected to be installed on U.S. coal-fired power plants by 2020, according to the U.S. Environmental Protection Agency (EPA). The EPA further estimates that FGD capacity is projected to double by 2020 to over 230 GW.

COAL POWER began outlining the SO3 emissions problem four years ago (May 15, 2006, "Curbing the Blue Plume: SO3 Formation and Mitigation"). That first story detailed how to reduce SO3 but gave little attention to the important role that gas monitoring has in reducing plant operation and maintenance costs. Batch method testing results in significant time between collecting and analyzing data. Until recently, there simply hasn’t been a reliable method for continuous testing that allows plant operators to instantly fine-tune a fuel treatment mix, dosage, and identify an application point(s).

The Environmental Energy Services (EES) continuous Pentol SO3 Monitor is an upgraded version of the SSI Monitor that was extensively used in the 1980s on hundreds of plants worldwide with much success. Recent examples where the EES continuous SO3 monitor has helped achieve this objective are a 500-MW power station in the southern U.S. and a 600-MW plant in the Midwest that fires bituminous coal.

At the 500-MW coal-fired power station, the new SCR produced opacity that exceeded permit limits during ramp-up and high-load conditions. Several companies and experts were consulted to solve the problem. The problem was initially determined to be related to fly ash resistivity. Several phases of continuous SO3 monitoring in conjunction with a chemical treatment application helped to bring the unit up to full load while staying in opacity compliance (Figure 1). 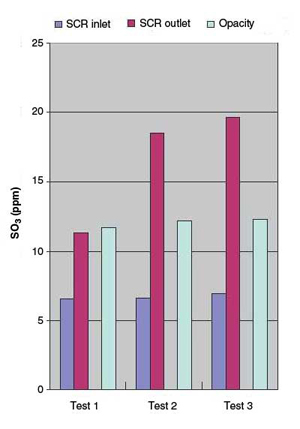 1. SO3 produced by the SCR at a 500-MW power station in the southern U.S. is shown. Continuous SO3 monitor testing at several locations was supported with EPA method 8A controlled condensate and specialty acid deposition rate probes. The three tests were conducted over a one-hour time span. Source: EES

The test data collected and shown in Figure 1 demonstrates that the generation of SO3 in the SCR is significant. Comparing the SCR inlet to outlet reveals that the SCR is, at a minimum, doubling the amount of SO3 produced by the steam generator.

Testing also found that SO3 trends at the stack follow the EES CoalTreat 500 dose quite closely. When dosage was returned to zero, SO3 values shot up over 25 ppm and quickly returned to the level of 10 ppm when feed was restored.

To help mitigate the impact of SO3 concentrations on a boiler firing coal and in a region with severe power constraints, a multitude of chemical additives were evaluated to reduce SO3 production. One such additive was CoalTreat 500 (an EES Inc. product platform), a select grade of magnesium carbonate (MgCO3) ore. The treatment generally suppressed SO3 by 50% at the SCR inlet compared to the data shown in Figure 1 (Figure 2). 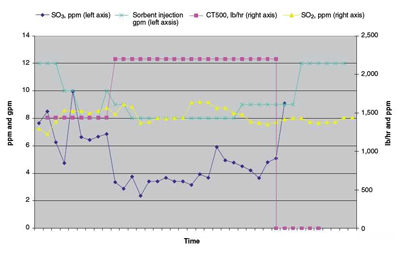 2. The SO3 trend at the SCR outlet also showed significant reductions with 2,200 lb/hr of Coal Treat 500. Note the rapid increase in outlet SO3 concentration when the chemical feed is stopped. The data was collected over a 10-day period. Source: EES

The data also showed that SO2 and SO3 track together on all of the data charts. Therefore, at three times stoichiometric (3x stoich) dosages of 1,440 lb/hr CoalTreat 500, SO3 values at the SCR inlet averaged 6.5 ppm, which corresponds to a 35% reduction.

When CoalTreat 500 was raised to a new dose of 5x stoich, or 2,200 lb/hr, SO3 values immediately dipped to a steady average of 3 ppm, which corresponds to a 70% reduction in SO3 (Figure 3). At the SCR outlet, SO3 was reduced to 12 ppm from 30 ppm baseline values at 5x stoich dosage (see Figure 2). At a dose of 3x stoich, the numbers were averaging 5 ppm, but SO2 values were significantly lower during this period. The reactivity of CoalTreat 500 carrying over through the SCR suggests that a dose of 3x stoich is more than adequate to reduce SO3 formed at the catalyst by more than 50%. 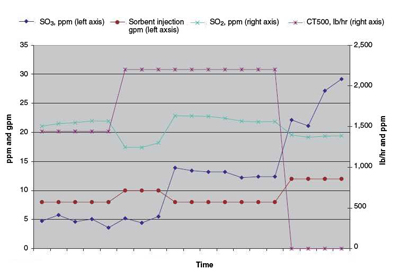 3. A Pentol SO3 monitor was used to collect SO3 emissions at the west "A" side of the SCR outlet, with and without sorbent injection. The data was collected over the same 10-day period as is shown in Figure 2. Source: EES

The data demonstrates how continuous testing, combined with CoalTreat 500 treatments, is effective at reducing SO3 formation from the SCR, which should have a positive effect on particle resistivity.

The objective of the CoalTreat 500 demonstration at the Midwest plant where bituminous coal was being used was to reduce SO3 from the furnace by a minimum of 50%. Prior to treating the coal with CoalTreat 500, an SO3 profile for three different coals in the customer’s system was conducted using a continuous SO3 monitor. Table 1 summarizes SO3 results from this phase of baseline testing.

The primary goal of the program was achieved based on EES’s continuous SO3 monitor and controlled condensate test methods. Overall SO3 reductions comparing baseline with CoalTreat 500 are shown in Table 2.

During the test period, the customer’s hydrated lime system was turned off (resulting in a 50% reduction in lime flow) for one shift, and opacity continued to trend downward, suggesting that the lime system may be further optimized with the use of CoalTreat 500 and continuous SO3 monitoring at the stack.

Phase II Test. Three different test methods were used during baseline testing: EES’s continuous SO3 wet chemistry monitors, EES acid deposition rate (ADR) probes, and EPA controlled condensate tests. The controlled condensate tests were run to verify the accuracy of the EES monitor instruments, which are normally run for trending purposes. The EES ADR probes are used by EES for trending purposes and to serve as a check on the trends being observed on the EES monitor. The ADR will normally correlate well with SO3 values when run at consistent temperatures.

Baseline data was collected the first week with coals having various sulfur levels. The objective was to get good correlation between sulfur and SO3 generated in the furnace. In order to achieve this, testing was conducted at the SCR inlet and outlet, and some samples were collected at the air heater outlet on both the east and west sides of the flue.

4. The trend of SO3 at the west "A" side of the SCR inlet. SO3 data was collected using the EES Pentol SO3 monitor. The SO3 readings shown are corrected to 3% O2. 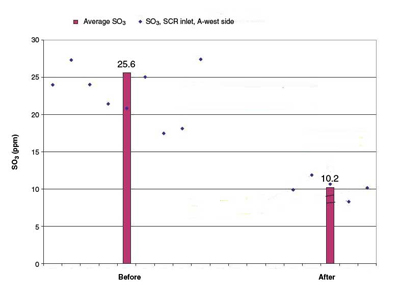 Based on the data collected and observations made during each phase of testing, most of the initial effects of CoalTreat are likely due to carryover of the fine magnesium oxide particles. However, the fact that the greatest reductions occurred on the last day of testing suggests that the magnesium is having a residual effect in the furnace.