San Miguel Electric Cooperative Inc. owns a single-unit power plant located about an hour south of San Antonio, near Christine, Texas. Its Unit 1 is a 440-MW lignite-fired boiler with a history of unscheduled shutdowns and outages caused by clinker formation. Clinkers would accumulate in the secondary superheater section and fall into the boiler, causing boiler tube damage.

Historically, cleaning of the boiler was a manual operation conducted according to the boiler operator’s discretion and plant standard practices. Operators ran a sectional sequence two times per 12-hour shift, or four times per day. However, without knowing where fouling and slagging was located, the operator could risk cleaning areas not covered by deposit (overcleaning) or fail to initiate cleaning activity in areas that were heavily populated by deposits (undercleaning).

Extensive research by both university and industry has revealed that over- and undercleaning of boilers can significantly increase the risk of premature tube failure. Overcleaning causes sootblower-induced tube erosion, while undercleaning promotes coal ash corrosion, localized heat transfer increase, and tube overheating. In addition, over- and undercleaning will adversely affect boiler thermal efficiency and impose a heavy penalty on overall plant heat rate.

Intelligent sootblowing (ISB) is an alternative and superior way to manage sootblower operations. ISB is based on a closed-loop control system that uses real-time information gathered from boiler operation parameters and/or fouling-monitoring devices. The ISB software includes an algorithm to control sootblower operations with live feedback from thermodynamic properties for cleanliness of heat exchangers in the boiler, including the primary and secondary superheater, reheater, and economizer.

The computer then determines how the exchangers should be cleaned and intelligently manages the sequence of the sootblowing operation in a way that prevents over/undercleaning of boiler tubes. The result is to restore boiler thermal efficiency and plant heat rate.

The SHFM is a network of strain gauges mounted on the hanger rods of a boiler convection section, whose main purpose is to detect a change in weight due to the accumulation of deposit in the convection section. Every time a sootblower is operated, the SHFM measures how many pounds of deposit are removed. This information is then used by the ISB system to manage sootblower operation and to rank each sootblower according to its effectiveness in removing deposits. The SHFM can also provide early detection of clinker formation. The ISB then prevents the clinkers from growing larger by selecting the appropriate sootblower to control the formations.

TDM is a thermodynamic program that uses boiler operating parameters to dynamically calculate the cleanliness factor (CF) of boiler convection sections. CF is the ratio of the current real-time heat transfer rate to the heat transfer rate when the exchanger is free from deposits. In other words, a CF equal to one is the condition where the heat exchanger is clean and free from deposits. The CF information is used by the ISB system to determine whether to send sootblowers to clean the heat exchanger. The management of CF can achieve a balanced heat transfer rate that benefits the overall boiler and plant performance.

In the one-year period following commissioning of the software and hardware at San Miguel, the plant did not experience a single forced outage caused by clinkers in the secondary superheater section. Prior to the upgrades, the plant experienced an average of two outages per year. The fouling levels have been successfully controlled throughout the convection pass of the boiler with the new ISB system. The value of a typical five-day outage is estimated to be $1,750,000 in lost revenue for the plant.

During the tuning process, the plant voiced two objectives: Keep steam temperatures under control and minimize exceeding current sootblower usage to preserve the life of tubes. By using ISB, San Miguel has been able to reduce steam consumption by reducing sootblower operations to an average of two to three times daily, as shown in Figure 1. This compares favorably with the previous operation of sootblowers four times per day. 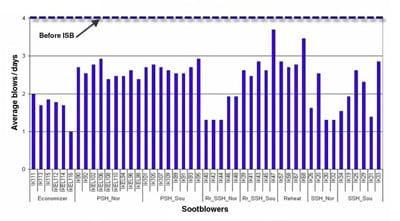 1. The average daily use of sootblower after installing the intelligent sootblowing (ISB) and system tuning is compared with a prior baseline of four blows per day. Source: San Miguel Electric Cooperative 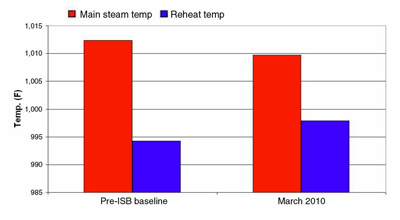 Editor’s note: A correction to the plant’s location was made 2/2/11.