The following two case studies prove the effectiveness of a three-step process that combines implementations of low-NOx burners, separated overfire air (SOFA), and high-energy reagent technology (HERT). The first two steps should be familiar, but the third may require explanation. The HERT system can be characterized by five designs/goals that work with low-NOx burners and SOFA to minimize emissions:

The first case study reports the results of testing the three-step process on a tangentially fired boiler owned and operated by Blue Ridge Paper Products Inc. The boiler (Figure 1) burns eastern bituminous coal to produce 400,000 lb/hr of superheated steam at 730F. Its balanced-draft furnace has 12 burners, four at each of three elevations. Layering the three technologies reduced NOx from the uncontrolled baseline of 0.70 lb/mmBtu to less than 0.15 lb/mmBtu. Baseline flyash loss-on-ignition (LOI) was <9% with opacity below 15%. ACT designed and supplied the low-NOx burners and the SOFA and HERT systems. 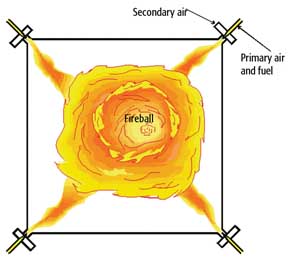 During the design phase, computational fluid dynamics (CFD) modeling was used to simulate the performance of each system before installation. The modeling was staged to validate the model as work progressed; the first model was of the baseline burner and furnace region. The simulations then projected the impact on NOx emissions and combustion performance of each system addition. The field performance of the HERT system also was simulated prior to completing the final system design. In each instance, the CFD model correctly predicted the final performance of the various NOx control technologies, working alone and in concert.

To summarize the results of activating each of the three systems in sequence:

How were these exemplary results achieved? The low-NOx burners stage combustion at their outlets, inhibiting the formation of the pollutant. The SOFA system (Figures 2 and 3), which is designed for 15% combustion air flow, diverts air from the burner zone to the upper furnace, enhancing combustion staging. As mentioned earlier, the HERT system injects a urea mist in a portion of the SOFA stream, enabling the urea to mix with combustion gases in the upper furnace. The heat of the SOFA steam vaporizes the mist on contact, improving its range over that produced by a conventional selective noncatalytic reduction system (Figure 4). 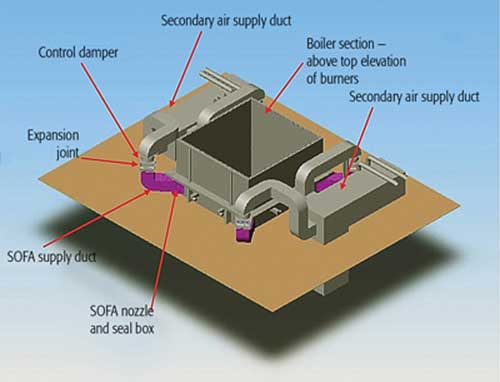 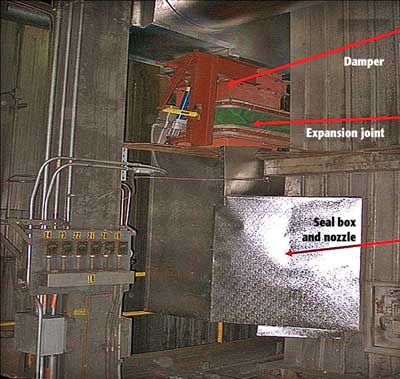 3. Here’s how the device shown in Figure 2 was installed on the boiler of a paper plant. Courtesy: Advanced Combustion Technology Inc. 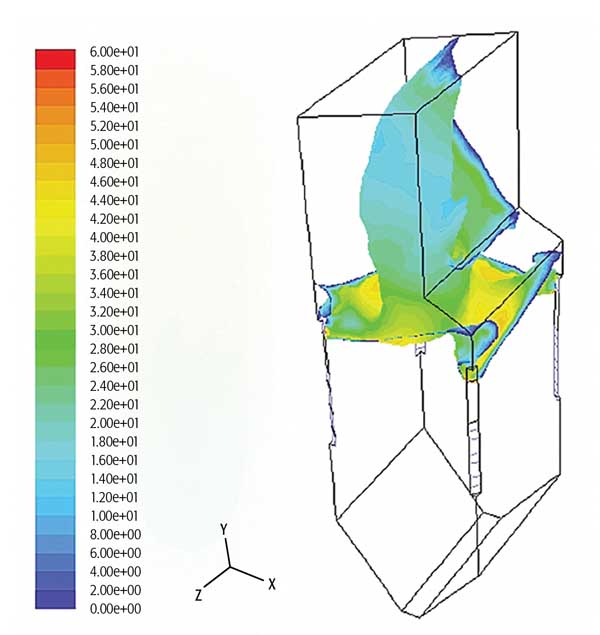 4. This CFD model predicts the velocity contours of the urea and SOFA streams. Values shown are in ft/sec. Courtesy: Advanced Combustion Technology Inc.

Only four HERT injectors (Figure 5), one in each SOFA port, were needed to achieve average NOx reduction of 50% over the boiler’s load range. No additional pressure part penetrations were required to install the HERT system. With the system operating, the ammonia slip across the load range was less than 1 ppm at the air heater inlet. 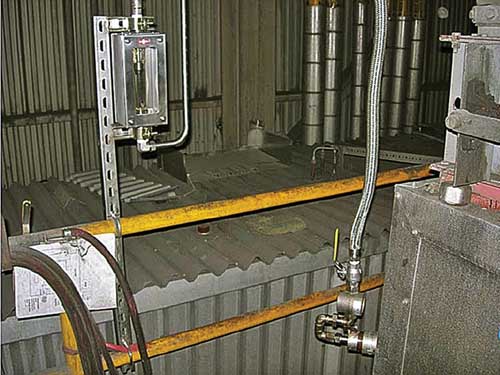 5. The high-energy reagent technology (HERT) injector is visible at the lower right of the image. Courtesy: Advanced Combustion Technology Inc.

The HERT system’s capital and operating costs were pegged at $1,100 per ton of NOx removed. Working together, the three technologies reduced NOx levels to those achievable by a selective catalytic reduction system at a fraction of its cost. All three technologies were supplied and installed for the equivalent cost of $25/kW.

Works on Oil Burners, Too

The second case study demonstrated the effectiveness of the layered approach to NOx reduction on a wall-fired boiler firing No. 6 oil. The boiler powers the 125-MW Unit 2 of NRG Energy Inc.’s 770-MW Middletown (Conn.) power station. Unit 2 was originally designed to burn eastern bituminous coal. It was uprated from 110 MW to 125 MW when the 12 circular-register burners were converted to fire No. 6 oil or natural gas only at four elevations.

To test the three-step approach, ACT first upgraded those burners with low-NOx models of its own design (Figure 6) and modified the boiler’s existing SOFA system to improve combustion dynamics and optimize CO burnout in the upper furnace. With the new burners and the enhanced SOFA system in operation, the boiler’s NOx emissions fell from the full-load baseline value of 0.39 lb/mmBtu to 0.22 lb/mmBtu. That wasn’t enough of a reduction, because the goal of the layered approach — applied to oil-burning boilers — is a NOx level of less than 0.15 lb/mmBtu. 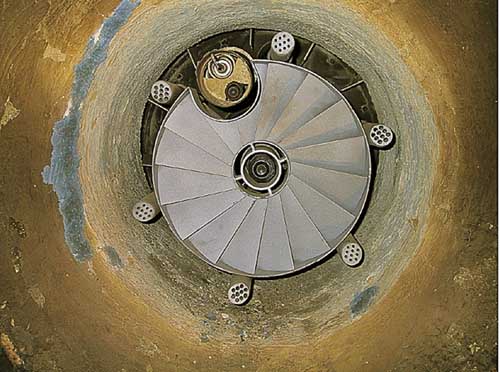 6. A close-up of one of the low-NOx burners that ACT designed and installed on Unit 2 of NRG Energy’s Middletown (Conn.) power station. Courtesy: Advanced Combustion Technology Inc.

The next step was to install the HERT system and demonstrate its ability to further reduce NOx. Before doing so, ACT took the opportunity to use its portable test system to verify the HERT system’s performance. The portable test system (Figure 7) contains a urea-metering module, a dilution water-and-mixing module, and high-energy injectors designed for the specific application. The injectors make use of a carrier air stream as well as SOFA carrier air. 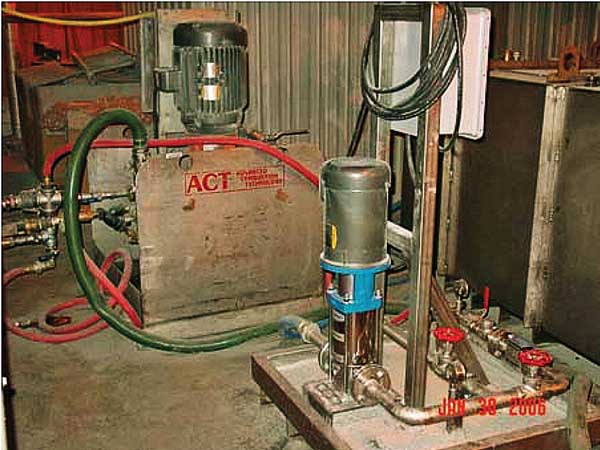 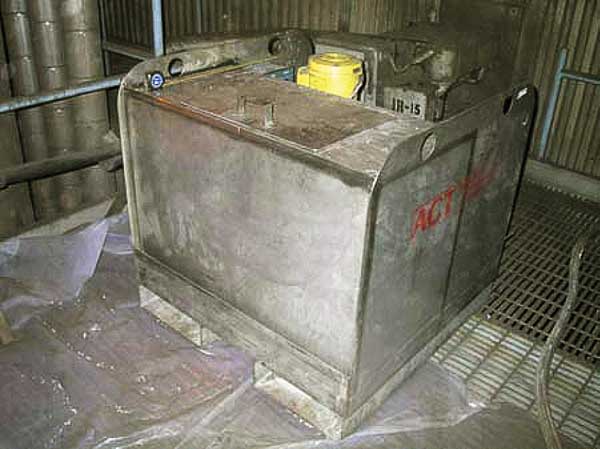 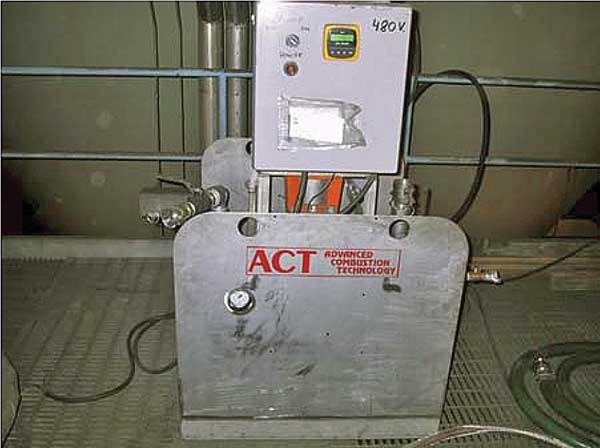 7. These are the three components of the portable test sytem that ACT uses to test the effect of injecting a reagent into a separated overfire air stream. Courtesy: Advanced Combustion Engineering Inc.

The injectors were tested in the SOFA ports and at one level of observation ports. Activating the HERT system and two injectors reduced full-load NOx from 0.22 lb/mmBtu to 0.118 lb/mmBtu (exceeding the design goal), with an ammonia slip of 6.2 ppm. Operating all three systems — the low-NOx burners, SOFA, and HERT — produced an overall NOx reduction of 67%. All three systems can be supplied and installed on a boiler of this type for a cost between $7/kW and $10/kW. Based on the success of the demonstration, NRG permanently installed the HERT system on Unit 2 and has operated with the NOx less than 0.12 lb/mmBtu across the load range and with ammonia slip of less than 4.6 ppm.

This article is based on the author’s presentation at the U.S. DOE-NETL 2006 Environmental Controls Conference.