In an effort to more than double its power capacity by 2030, the Brazilian government in November approved construction of a controversial $3.9 billion hydroelectric dam on the Madeira River, in the Amazon. When completed in 2013, the Jirau hydroelectric plant could add 3,300 MW to the country’s already massive 59 GW hydroelectric capacity.

Brazil is already home to the Itaipu hydroelectric power plant on the Paraná River, a project capable of producing 14 GW. Comprising 20 generating units of 700 MW each, that dam powers 20% of Brazil and 93% of Paraguay (Figure 4). But since 2001, when a drought forced Brazil to rethink its reliance on hydropower and plunged the country into a power crisis, that country has been considering a variety of power sources. Among its most salient plans is the construction of 50 to 60 nuclear power plants, each with an installed capacity of about 1,000 MW, within the next 50 years. 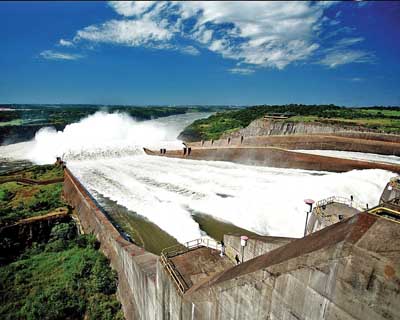 4. Massive hydro power. The Itaipu hydroelectric power plant on the Paraná River is co-owned by Brazil and Paraguay. With 20 generating units each capable of generating 700 MW, the dam powers 20% of Brazil and 93% of Paraguay. The Brazilian government’s approval of the Jirau hydroelectric plant in November could add 3,300 MW to the country’s already massive 59-GW hydroelectric capacity. Courtesy: Itaipu Binacional

Only recently, when faced with unreliable gas supplies due to a political crisis in Bolivia, did the government hail the rebirth of mega hydro power in Brazil. Crucial to its plans is the construction and operation of two plants on the Amazon’s Madeira River for combined capacity of 6.45 GW. A second project, the long-anticipated 11.1-GW Belo Mont hydro plant proposed for the Xingu River, is also in the pipeline.

But the road to approval for the Jirau plant has not been easy. Environmentalists and indigenous peoples have expressed strong opposition to all three hydropower projects. Then, a battle erupted between the two consortiums that had contended for the winning bid to build Jirau. The losing consortium, Odebrecht — which won the first 3,150-MW phase of the two-dam project — and state utility company Furnas, have argued that the winning consortium, led by France’s Suez Group, submitted a flawed bid by moving the site of the dam six miles from the site laid out in the project’s feasibility and environmental impact study. The Suez consortium contends that by moving the site, it would save more than $42 million in construction costs.

The argument is poised to break into an all-out legal battle, with the federal public prosecutor’s office threatening to sue the head of Brazil’s electric energy regulator for approving the site change without enforcing the need for a new environmental study. To complicate the matter, Odebrecht and Suez are partners in other generation projects in Brazil. The Brazilian government — eager to get on with increasing capacity (and begin building Jirau before the six-month rainy season) — has threatened that government holding company Electrobras would take over the projects to prevent a legal battle.

Analysts agree that the issue would need to be resolved without raising eyebrows; at stake is the prospect of attracting private companies to the auction for the massive Belo Monte hydropower plant next year.