Nuclear plant owners understand the economic importance of squeezing every last megawatt-hour from their power generation assets and minimizing outage durations that cost them millions of dollars a day. When First Energy assumed operating responsibility for Beaver Valley Power Station in late 1999 the plant’s operating record was unspectacular. Today the plant has established itself as a routine top-quartile performer, thanks in part to its Full Potential Program.

The U.S. nuclear industry hasn’t built a new plant in a generation, but uprate programs have added the equivalent of 5,640 MW of new capacity. Another nearly 500 MW worth of uprates are pending Nuclear Regulatory Commission (NRC) approval, and 1,713 MW more are expected in the NRC’s approval queue by 2013. The nuclear industry will have added the equivalent of eight more low-cost plants to our nation’s inventory of power generation facilities through uprates by 2013. Add to that the significant increase in the nuclear industry’s average capacity factor: from 56% in 1980 to just shy of 92% in 2007. That improvement, and much-shortened refueling outages, account for perhaps another dozen new nuclear plants. In sum, the industry has been building nuclear plants one uprate at a time for years.

The Beaver Valley Power Station (BVPS), located in Shippingport, about 25 miles northwest of Pittsburgh, Pa., is one such plant (Figure 1). Not only has it completed multiple plant uprates, but it also has upgraded many major equipment items while improving plant nuclear and personnel safety. But most importantly, the operating results for its two units are particularly satisfying to a project team that spent eight tough years contributing to efforts that made BVPS an industry Top Plant. 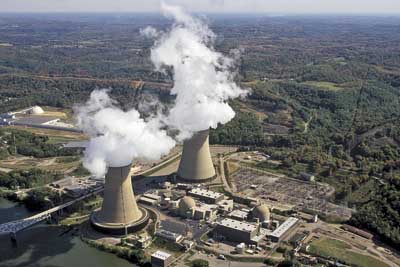 BVPS is located next to the site of the first American nuclear power station, the Shippingport Atomic Power Station (which closed its doors in 1982 after 25 years of commercial operation) and is owned and operated by FirstEnergy Nuclear Operating Co. (FENOC), a subsidiary of FirstEnergy Corp. Each unit’s three-loop pressurized water reactor (PWR) was originally designed by Westinghouse and rated at 810 MW when installed. Unit 1 entered service on July 2, 1976, and was followed by Unit 2 in August 1987.

The original nuclear steam supply system thermal rating of both units was 2,660 MWt, but that has grown to 2,900 MWt since the 9.4% total extended power uprate approved by the NRC in July 2006 has now been fully implemented. Obtaining approval of this uprate and successfully completing the upgrades was the culmination of the plant’s multi-year Full Potential Program (FPP). Today Units 1 and 2 are rated at 911 MW and 868 MW, respectively, and they routinely place in the top quartile of key industry performance and safety indicators.

The FFP encompasses a series of well-planned and well-executed system and safety upgrades, equipment replacements, and power uprates that were implemented in many phases over several years to maximize the asset value of BVPS. Improvements were attained through effectively integrating an update with the plant safety analysis and making related equipment modifications and replacements. The units are now operating at higher thermal and electrical power levels and have increased margin in the areas of shutdown safety, plant safety, and operating margin.

The recent performance of Unit 2 is a good example of the success that can be attributed to the FPP. When Unit 2 began its scheduled refueling outage on April 14 of this year, the final FPP improvement projects were complete. One of those upgrades was replacing the unit’s high-pressure turbine to increase electrical production.

This outage came on the heels of a 520-consecutive-day power run, the second best in the unit’s 20-year history. (The best continuous run, of 537 days, was the previous run, from October 2003 to April 2005.) During 2007, Unit 2 had top-quartile performance with a 99.8% capability factor and a 0.05% forced outage factor — metrics any plant manager would envy.

Back to the beginning

FirstEnergy assumed operational responsibilities of BVPS in 1999 and immediately began a thorough assessment of the units’ health and safety. Its assessment revealed that the thermal rating of both units lagged that of other comparable Westinghouse three-loop PWRs. Further examination revealed several areas of potential improvement. For example, the subatmospheric containment design presented a challenge for day-to-day operations. Staff were required to use supplemental breathing equipment to perform routine operations and maintenance (O&M) activities. Unit 1 had some of the oldest equipment in the industry, including a Westinghouse Model 51 steam generator, reactor coolant pump motors were lacking upgrades, and the reactor vessel was experiencing an Alloy 600-related critical aging issue that’s common in the industry.

Besides equipment aging issues, the plant safety analysis was also out of date and was not in keeping with the latest design and analysis techniques. Initiatives such as Improved Standard Technical Specifications and license renewal were not even under consideration until FENOC assumed operations.

The challenge presented to the plant’s leadership was to develop a program that would not only raise the productivity of BVPS relative to the rest of the industry but also set new, higher standards for plant operation, O&M cost, safety, and as low as reasonably achievable (ALARA) radiation exposure.

FENOC immediately embarked on an aggressive program to address these many complex and interrelated issues. One of the first steps taken was formation of the Steam Generator Management Team as a collaborative asset management group that focused exclusively on maintenance of the existing, original steam generators. Later, the team evolved into the forum known as the "Full Potential" team.

The Full Potential team soon expanded its original charter and developed a multi-year project to recapture the plant design and operating margin and to integrate and leverage several program initiatives. That was the origin of BVPS’s Full Potential Program (Figure 2). 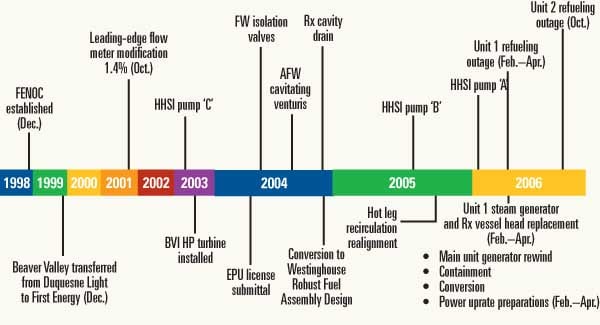 A candidate project for the FPP was first passed through rigorous engineering, economic, and safety reviews before being added to the program. Although many projects were added and completed during the program’s duration, the FPP focused on equipment, safety, and engineering initiatives to bring BVPS systems and procedures up to date. The following is a short list of upgrades made to BVPS as part of the FPP.

Updated best estimate for loss of coolant accident (LOCA) and alternative source term (AST). An upgrade to the safety analysis through a re-analysis and incorporation of the latest analytical techniques, including radiological AST. 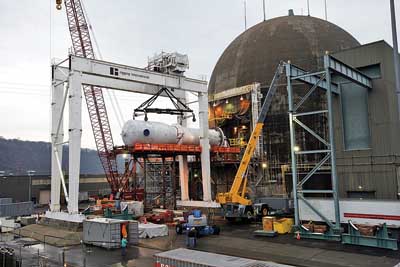 3.    Out with the old. One of the old Unit 1 steam generators after removal from the containment vessel. Courtesy: FENOC 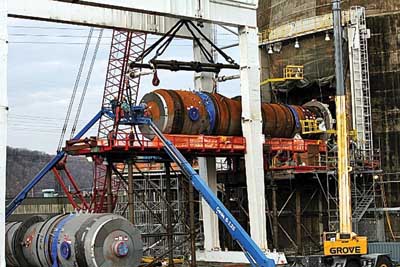 4.    In with the new. A new steam generator begins its lift before being skidded into the containment vessel on Unit 1. Courtesy: FENOC

Atmospheric containment conversion. A significant analytical, licensing, and plant modification program was undertaken utilizing advanced, first-of-its-kind analytical technology to convert the containment from a subatmospheric to an atmospheric design. This provided both safety analysis margin and enhanced personnel safety. The main consideration in this original design was to minimize the overall size of the containment in order to reduce construction costs and to limit the extent of potential post-accident radiological releases.

An indirect benefit to personnel safety is that staff have increased access to the equipment which leads to increased equipment monitoring. Increased monitoring can help ensure that equipment is running optimally and that discovery of degraded conditions happens earlier. And when equipment abnormalities are discovered earlier, personnel are exposed to less risk.

Modifications such as increasing openings inside the containment internal walls and redesign of the reactor vessel closure head and its external components have enhanced the safety environment for workers while performing outage activities.

Extended power uprate (EPU). BVPS completed the analysis and obtained regulatory approval of the first EPU of a Westinghouse three-loop PWR, resulting in an additional 8% increase in the plant’s thermal power rating, for a total increase of 9.4%.

BVPS has also implemented equipment upgrades and process improvements that have reduced radiation exposure, such as new steam generators, new reactor head and control rod drive mechanisms, head assembly upgrades, and modifications to the containment structure and working platforms around the new steam generators. The one-time savings resulting from these changes is estimated to be nearly 350 man-rem for the life of the plant. The one-time saving is based on lower source range from the new steam generators, zinc injection, reduced inspection scope on new generators, the new reactor vessel head, and user-friendly access to the new components. During each outage the refueling team and steam generator management team expect to realize an additional dose savings of seven man-rem.

Nuclear safety was increased through a reduction in post-accident LOCA peak clad temperature. The containment design margin also was enhanced. Several significant modifications were also performed that have increased margin and were integrated with the safety analysis effort. These modifications included upgrading or replacing the high head safety injection pumps, installing new fast-acting feedwater isolation valves, adding a reactor cavity drain for water that would otherwise remain trapped in the reactor cavity to get to the containment sump, and making modifications for simultaneous hot and cold let recirculation to provide additional flow to back-flush the reactor core to prevent boron precipitation.

Overall steam generator inspection time has also been reduced. Given the condition of the Unit 1 original Model 51 steam generators, 100% of the tubes required inspection during each refueling outage. The elimination of this inspection requirement alone will save approximately $3.5 million per outage.

The net effect of the FPP on productivity has been substantial since its initiatives began in 2000. Operating data show significant improvement in gross capacity (Figure 5), reduction in lost capacity due to forced outages (Figure 6), and reduction in lost capacity due to planned outages (Figure 7). The operating data also show substantial improvement relative to the Westinghouse PWR average benchmark performance five years after the FPP began. 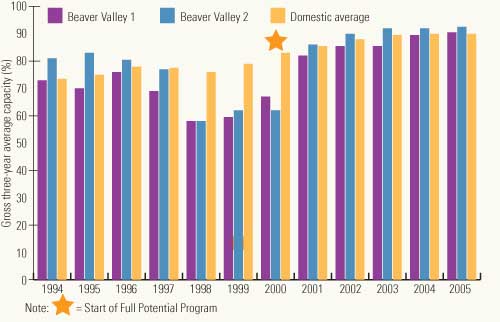 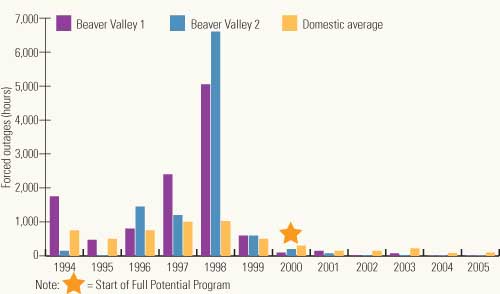 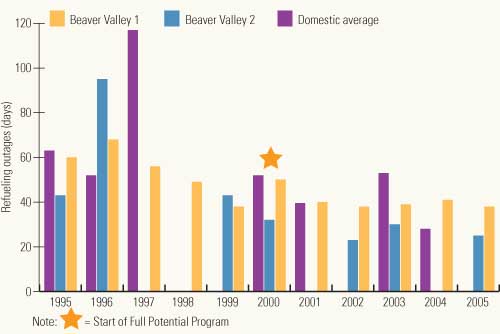 —Michael Testa (testam@firstenergycorp.com) is a project manager at the Beaver Valley Power Station.