The challenge Spanish regulators face is balancing their country’s energy needs (now growing at 5% a year) and keeping Spain’s carbon emissions promises under the Kyoto Protocol. Their solution for keeping the lights on in the fifth-largest electricity market in the EU is born of necessity and immensely practical: build natural gas–burning, high-efficiency combined-cycle plants and significantly increase Spain’s wind power portfolio. Adding more coal plants was just not in the cards, given Kyoto and a government actively working to close coal mines. In Spain, the use of coal for power generation has dropped almost 50% over the past two decades.

Spain began shifting from coal to natural gas as the preferred fuel for baseload capacity in the mid-1990s even though the country must import all of ifs gas, either by pipeline (from one offshore field operated by Repsol-YPF) or as liquefied natural gas (LNG). Spain is Europe’s second-largest LNG importer (after France) and relies on Algeria for over 60% of its total. Spain leads the EU in growth of natural gas consumption; that growth is projected to continue at a rate of about 10% a year through 2011.

Spain, the world’s second-largest producer of wind power (Germany is No. 1), also has invested heavily in that technology. Over 10,000 MW now is on-line—one-sixth of the world’s total at the end of 2005—satisfying 6% of Spain’s total electricity demand. Another 57,000 MW of wind projects are on the drawing board. Comparatively, the U.S. is an also-ran with a mere 9,000 MW in operation at the end of 2005.

Madrid-based Iberdrola Generación S.A. (Iberdrola), the largest owner and operator of renewable energy facilities in the world, expects to hit 6,200 MW of installed wind capacity by 2008 as part of its plans to build over 10,000 MW of capacity fueled by renewable energy sources worldwide by the end of 2011.

Close to Arcos de la Frontera, in the southern Spanish province of Cádiz, Iberdrola recently placed into commercial service the Group III 800-MW power block, featuring two General Electric (GE) Frame 9FB gas turbines (Figure 1). The project began six years ago with the acquisition of a 400-MW combined-cycle plant under development by Abengoa Group. That was followed by the purchase of a 1,200-MW project being developed by an Enron subsidiary. By early 2003, Iberdrola was granted permission to construct the 1,600-MW Arcos de la Frontera (Arcos) plant. At an estimated cost of 800 million euros (about $1 billion at current conversion rates), Arcos (Figure 2) is the largest and most expensive power plant Iberdrola has built in its 100-year history. 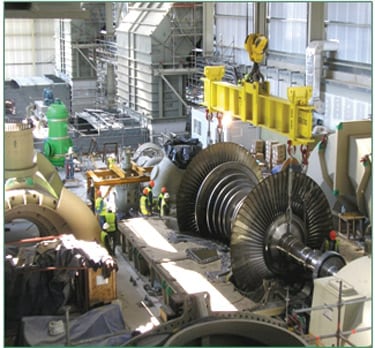 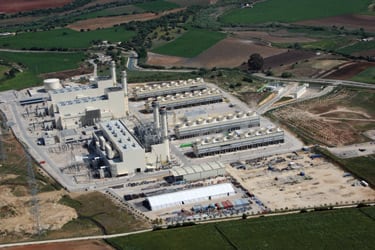 Phase A (consisting of Arcos I and II) went into commercial service in 2004. During that year, Iberdrola also started up the 400-MW Santurtzi combined-cycle plant, for an annual total of 1,200 MW. Phase B of the Arcos III plant and a 400-MW plant in Aceca, Toledo, added another 1,200 MW of combined-cycle muscle to Iberdrola’s portfolio the following year. If the 800-MW Escombreras plant is commissioned this year as expected, Iberdrola’s total increase in combined-cycle capacity over the past three will be a whopping 3,200 MW.

General Electric and Iberdrola celebrated a milestone when the world’s first Frame 9FB at Iberdrola’s Arcos de la Frontera III power block was first fired on August 27 and first synchronized to the grid on September 5, 2005. The 9FB, whose development culminated in its product launch in mid-2002, is a logical extension to the venerable 9FA. A notable addition is a three-stage turbine (Figure 3). 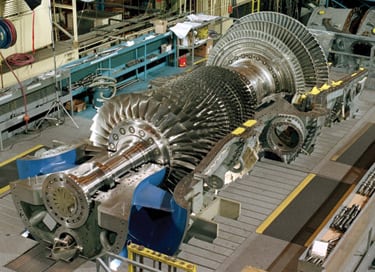 Increases in both machines’ efficiency and output began with increases in their firing temperatures. That was made possible by the specification of critical parts comprising a variety of advanced materials that trace their heritage to the H System development program. For example, the original 7F introduced more than 15 years ago operated at 2,300F, while today’s 9FB operates above 2,500F. Two hundred degrees doesn’t sound like much, but at those temperature levels, an increase of just a few degrees poses a significant technical challenge.

The design of the 18-stage compressor (with an 18.5:1 pressure ratio) in the 9FB is based on that of the 9FA compressor, which doesn’t lack for operating experience. It replicates the variable inlet guide vane geometry needed to increase part-load efficiency and start-up surge control.

The three-stage turbine is the most obvious upgrade over the 9FA’s design. New blade designs selected a single-crystal N5 for the first-stage bucket with a thermal barrier coating. Directionally solidified GTD444 was used for the second- and third-stage buckets. First- and second-stage nozzles use GTD111, which improves creep resistance to the point that the 9FB has the same maintenance intervals as the 9FA. Compressor bleed air is used to cool the buckets in the first two turbine rows.

The Arcos III 9FBs are outfitted with GE’s DLN 2.0+ combustion system. The design features GE’s "swizzle" technology, a combination of a swirler and a nozzle with an added center nozzle. The result is said to be improved flame stability and fuel staging.

With turbines of this size, only so much factory testing is possible. One of the turbines destined for Arcos III (Figure 4) was instrumented with more than 1,100 turbine and 300 accessory sensors to facilitate more than 170 hours of testing to evaluate component dynamics and transient stability across the entire load range. Basically every operating point the plant might encounter was thoroughly tested. 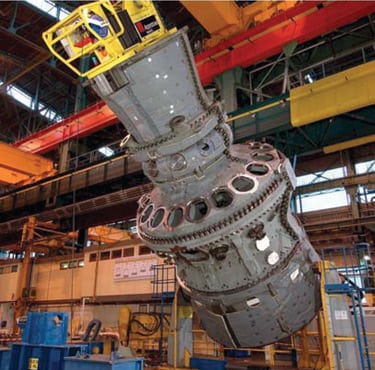 Iberdrola is obviously satisfied with the performance of the 9FB, because the company plans to duplicate Arcos III’s 2 x 1, 800-MW power block at the Escombreras combined-cycle plant now under construction in Murcia, Spain, and scheduled for commercial service late this year. In addition, two units are slated to go into a 209FB plant in Castellón, Spain (north of Valencia) that’s scheduled for an early 2008 start-up. Those units (and 9FBs for future plants) will be equipped with GE’s new DLN 2.6+ system—essentially a 9FA DLN2.0+ combustion system grafted onto the DLN 2.6 system from the 7FA. The DLN 2.6+ is said to limit the 9FB’s NOx emissions to 25 ppm, which meets all EU directives. Finally, a single 9FB will be shipped to Latvia this December to enable the expansion of Riga Thermal Power Plant II, the largest thermal plant in that country.

Both Arcos I and II have a common driveline for the gas turbine and steam turbine, which drive a common generator from opposite ends. Such a 1×1 configuration is rare in the U.S. Each of the identical 400-MW (nominal) units (Table 1)—which produce in parallel—has a GE 9FA gas turbine rated at 248 MW (see box), an NEM heat-recovery steam generator (HRSG), and a GE D10 steam turbine rated at 136 MW. Two Alstom-supplied condensers sit under the steam turbine, whose drivelines are enclosed in a common building with the air inlet filter house mounted on the roof. The HRSGs are located outside the building. An auxiliary boiler supplies start-up steam. Arcos I and II use liquid fuel (with a maximum sulfur content of 0.2%) as backup.

Table 1. Combined-cycle performance at Arcos I through III. Source: Iberdrola

Arcos III, which is configured as a more-familiar 2 x1 800-MW power block, is the first commercial host of two GE 9FB turbines nominally rated at 259 MW apiece (Figure 5), two NEM multi-pressure HRSGs, and one 295-MW GE D11 steam turbine (Figure 6). In GE vernacular, this configuration is called a STAG (STeam And Gas) 209FB. Initial baseload operation was reached in late November 2005. The entire plant is designed for baseload operation (operation at full load for 8,500 hours a year). The output of Arcos III travels through a 400-kV substation at the plant to Red Eléctrica, Spain’s national grid operator. 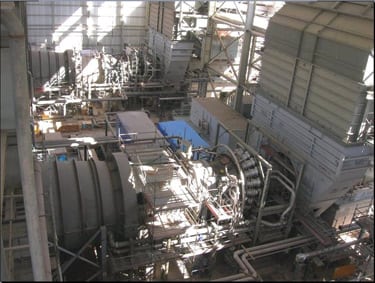 The steam turbine has a single high-pressure/intermediate-pressure (HP/IP) section and one dual-flow low-pressure (LP) section with control and shutoff valves for each of the three sections. The HP steam supply is at 1,800 psia and 1,050F, and the exhaust pressure is 1.73 inches Hg. The HP and IP stages have a bypass system, enabling steam to be desuperheated before entering the condenser. The bypass system activates whenever pressures fall to a predetermined setpoint and also during start-up and low-load operation to provide more operating flexibility. The D11 steam turbine is fitted with GE’s new 48-inch last-stage blades.

The plant’s distributed control system (DCS), located in the control room, handles overall plant control functions (via start-up, shutdown, and emergency operation signals), monitors field instrumentation, and controls auxiliary systems (Figure 7). Turbine controls for Arcos III, also in the control room, are provided by a triple-redundant GE Speedtronic Mark VI system. It directly controls and monitors the gas turbines, steam turbines, the three GE 330H generators (rated at 330/360 MVA), and other plant auxiliaries. The turbines are controlled by the Mark VI via a communications link with the DCS. 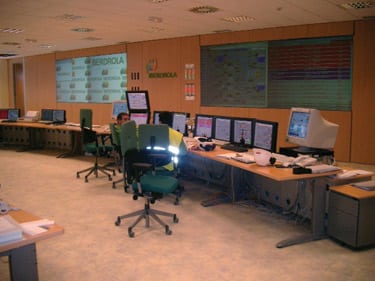 Iberdrola elected to construct a single building to house the control room and monitoring systems for the entire plant, as well as offices, shops, and storerooms. Three other buildings house the water treatment, compressed-air, fire protection, and other balance-of-plant systems. 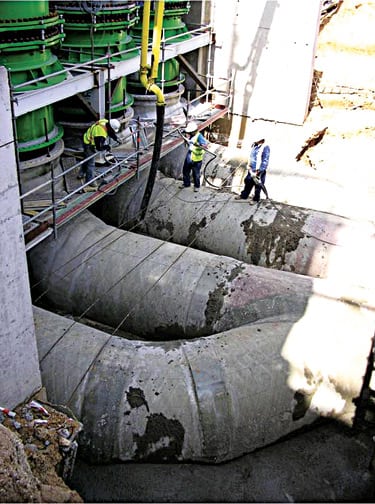 Performance of the plant since commercial operation commenced has been exceptional, surpassing contract performance (Table 2) and emissions limits (Table 3) with room to spare. As of July 1, Unit 3 (Arcos III, gas turbine 1) had accumulated 1,968 fired hours and 92 starts. Unit 4 had 2,285 fired hours and 75 starts.

Table 3. 9FB emissions test results at Arcos III. Data are based on two 24-minute tests at part load and three 64-minute tests at baseload for each unit. All data shown are corrected to ppmv@15% O2. Source: Iberdrola