The Monticello Steam Electric Station (Figure 1), comprising three supercritical units collectively rated at 1,880 MW (net), is located in northeast Texas, just southwest of the city of Mount Pleasant and about 120 miles east of Dallas. Monticello Units 1 and 2 are each rated at 565 MW and are powered by a Combustion Engineering boiler and a Westinghouse turbine-generator. They came on-line in 1974 and 1976, respectively. Steam conditions are 3,500 psi and 1,005F. Unit 3, rated at 750 MW, is powered by a Babcock & Wilcox boiler and a turbine-generator from General Electric. Unit 3, with identical steam conditions, went into service in 1978. 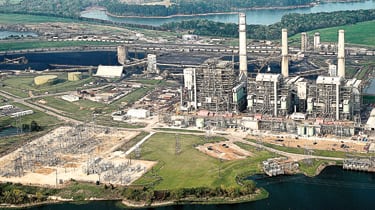 At the Monticello plant, electrostatic precipitators and baghouses remove particulate matter while a scrubber removes sulfur dioxide and low-NOx burners limit the formation of nitrogen oxides. Monticello recycles and reuses process water, so it has no need to discharge it. Some of the ash by-products of burning lignite and PRB coal are recycled into products such as concrete, ready-mix cement, road de-icing material, and clay and concrete blocks. The Monticello plant is cooled by 2,000-acre Lake Monticello, a popular fishing and recreation site.

Monticello operates in baseload mode throughout much of the year. The units do some load following—for frequency control—during the spring and fall, when few natural gas–fired units are dispatched to the Electric Reliability Council of Texas (ERCOT) grid. As Table 1 shows, Monticello’s equivalent availability and capacity factors are now approaching 90%. Over the past five years, the plant’s equivalent forced outage rate has fallen to below 6%, from a peak in the mid-twenties a few years prior.

During its first two decades of operation, Monticello exclusively burned local lignite, its design fuel. In 1995, management began blending PRB coal with the lignite to improve overall fuel quality. Over time, the share of PRB was increased slowly; today, it accounts for 50% of Monticello’s total fuel tonnage. Last year, Monticello burned nearly 6 million tons of it. Table 2, which compares four key characteristics of the lignite and PRB coal burned at Monticello, makes clear that the blending indeed represented a fuel upgrade.

Significantly, the increasing share of PRB coal in the fuel mix slowly but surely reduced Monticello’s emissions of pollutants, including mercury (Table 3). The positive, downward trends were a key reason that TXU Power’s parent, Dallas-based TXU Corp., recently proposed building 11 new coal- or lignite-fired units in Texas (including Monticello Unit 4) with a total capacity of 9,079 MW by 2010—as well as another 5,000 to 8,000 MW of coal-fired capacity in the Pennsylvania-New Jersey-Maryland region (see box).

Much of the credit for the success of the blending program in recent years must go to Barry Boswell, director of generation at Monticello for almost five years prior to November 2005, when he left to become director of TXU Power’s Martin Lake plant. Boswell provided the leadership needed to bring about the changes that ultimately led to Monticello’s being named the PRB Coal Users’ Group Plant of the Year for 2006.

In partnership with the engineering/procurement/construction giants Bechtel Corp. and Fluor Corp., TXU Corp. plans to build as much as 17,000 MW of coal- or lignite-fired capacity by the early years of the next decade in two regions. The objective is to give the company a significant competitive edge in the Electric Reliability Council of Texas (ERCOT) and Pennsylvania-New Jersey-Maryland (PJM) wholesale markets, where natural gas–fired power is often on the margin.

The planning in ERCOT is further along. This June, TXU upgraded its capacity estimates for the eight PRB coal-burning units of the 11 it had previously proposed for east Texas, based on the selection of Babcock & Wilcox Co. as the supplier of their boilers; the new total for ERCOT is 9,079 MW (Table 4). Earlier, TXU Chairman and CEO John Wilder laid out plans to quickly design and construct 5,000 to 8,000 MW of standardized, supercritical, pulverized coal-fired plants in PJM.

According to Wilder, TXU expects to be able to cut costs in several ways. Adding new units to existing plants and using standardized designs (defined with the help of Bechtel) will save $205/kW, he said, while "scale procurement savings" will trim another $60/kW. Finally, "overhead scale" will cut another $50/kW, with "lean construction" shaving another $35/kW.

The challenges of PRB

The blending of PRB coal with lignite, however, posed two major challenges. One was that Monticello’s fuel yard and rail unloading system were not designed to handle two different fuels. The four key characteristics of lignite are notoriously variable. If the plant’s stacker/reclaimer doesn’t deliver a fuel mix of sufficient quality to support full-load operation, production suffers.

Monticello’s rail unloading system was designed to handle 20-car train sets. Bringing in and unloading a 135-car Western coal train takes much longer, potentially interrupting lignite deliveries and ash hauling. At Monticello, the goal is to turn around each PRB train in less than 12 hours.

The second major challenge resulting from the introduction of PRB coal was generic, rather than site-specific. PRB coal is extremely friable and begins to break down into smaller particles as soon as it leaves the mine—regardless of how it is transported or handled. Higher levels of fines and dust cause PRB coal to escape and accumulate, increasing the potential for spontaneous combustion. Containing the coal, dust, and fines within the plant’s fuel-handling system is a big, expensive challenge. Failing to do so can create even bigger ones.

Complicating the issue, the plant’s fuel-handling system was already nearly 20 years old when PRB coal was introduced at Monticello. The added fines and dust exacerbated existing problems, such as fuel leaking around seals and skirts and through openings in equipment (Figure 2). Making the situation even worse, housekeeping was a lower-priority task in Monticello’s culture at the time. 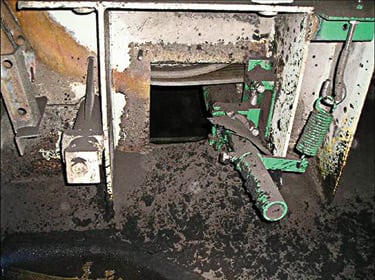 2. Who let the dust out? In the past, degraded hardware—such as this open hole for a scraper—allowed coal fines to escape unimpeded from Monticello’s fuel-handling system. Courtesy: TXU Power

Inevitably, when conditions like these are allowed to exist, it’s only a matter of time before equipment and the safety of personnel are put at risk. For Monticello, the wakeup call to action was a fire in 2003 high up on one of the two fuel conveyors for Unit 3. The City of Mount Pleasant Fire Department had to be called in to extinguish the fire because the spray from the plant’s fire truck couldn’t reach it.

A subsequent investigation revealed several problems with the existing conveyor fire protection system. For example, the deluge system failed to activate automatically; it had to be turned on manually from the transfer tower. Even then, enough of the system’s nozzles were plugged to seriously compromise its effectiveness.

The cause of the fire is believed to have been fuel buildup in the dribble pan underneath the conveyor. For an unknown reason, the wash water that runs through the pan to remove fuel accumulation had been turned off, making it possible for the fuel to accumulate and ignite spontaneously.

The fire made the Monticello staff realize just how vulnerable the plant was and how critical it is to properly handle fuel—especially PRB coal. To prevent a reoccurrence, a way had to be found to "keep fuel on the belt and burn it in the boiler." That would necessitate:

Monticello’s management made better containment of PRB coal the top priority. In short order, improvements were made throughout the fuel-handling system. New impact and support roller beds and rubber skirting were installed. The height and length of the load-zone containment were increased to allow dust to settle within it. Openings in chutes and head boxes were closed. Repairs were made throughout the system to keep fuel and dust contained. 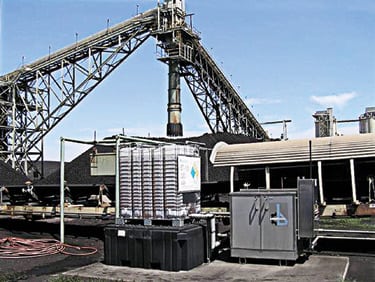 3. Keep it down, please. At Monticello, foam-based dust suppression systems from Benetech were purchased and installed. Courtesy: TXU Power

Finally, the system’s fire-suppression system was upgraded. Deluge valve stations were moved into structures—outside fire "danger zones"—that personnel can safely enter to activate the system, if necessary. The system is periodically tested to make sure that all nozzles are operating properly. Flush valves also were added to the system to allow headers to be flushed to remove debris that could clog nozzles.

Just as containment is crucial to fuel handling, housekeeping is fundamental in preventing coal fires and explosions. At Monticello, housekeeping across all active parts of the fuel-handling system—beginning at train-receiving tunnels and continuing through tripper and crusher houses and conveyor belts—is a daily duty. Equipment is shut down to allow effective cleanup and washdowns. Entire structures are washed down less frequently (usually weekly) with the help of contract labor.

Personnel who work in fuel-handling areas understand that housekeeping is everyone’s responsibility. They clean up spills when they find them, investigate to find the sources, make repairs themselves or write work requests, and follow up on the repair process. As a result, Monticello is noticeably cleaner than it used to be (Figure 4).

4. Classic before and after. Shown on the left is part of the fuel-handling system that had been upgraded before housekeeping was made a higher priority. At right is the same area today, at a much higher level of cleanliness. Courtesy: TXU Power

In power generation, as in other industries, old habits—like inattention to housekeeping—die hard. However, their death can be accelerated by a culture change driven from the executive suite.

To succeed, management must set a new standard, define expectations, support initiatives by removing barriers to employee participation, measure progress, and provide feedback. Plant staffers’ involvement and buy-in are critical to the success of any change initiative. At Monticello, employees’ attitudes reflect the new culture’s emphasis on taking personal responsibility for cleanliness—and its impact on safety. Everyone is as proud of what they do, and they are determined to go home safe at the end of each day.

That’s not surprising, because safety was a priority at Monticello long before the introduction of PRB coal made it something not to take for granted. The last time an employee suffered a lost-time injury was July 1992, almost 8 million man-hours ago. More recently, the Monticello plant staff has worked over 16 months without a restricted-duty injury.