The New York Power Authority (NYPA) was created by then-Governor Franklin D. Roosevelt and the New York State Legislature in 1931 to develop the hydropower resources of the St. Lawrence River. NYPA’s mandate has grown over the years. It now owns and operates hydro and fossil-fueled plants statewide that generate about 25% of the state’s power and ensure that affordable electricity is available to all New Yorkers.

Among its assets is the 800-MW St. Lawrence-Franklin D. Roosevelt Power Project, in Massena, N.Y. This project is part of an international power dam—the Robert Moses-Robert H. Saunders Power Dam—operated by the NYPA and Ontario Power Generation, with 16 turbine-generators on each side of the U.S.-Canadian border. The plant came on-line in 1958 and was relicensed in 2003 for another 50 years of service. NYPA—which is based in White Plains, N.Y.—also operates the Niagara Power Project, the 1,040-MW Blenheim-Gilboa Pumped Storage Power Project, and five smaller hydro projects scattered across the state. It hopes to receive a new 50-year license for its Niagara Power Project by mid-2007. The 2,400-MW project, which first went into service in 1961, is New York State’s single largest source of electricity.

NYPA Astoria (Figure 1) is the latest addition to the fleet and the first large generating facility to have been built in the Big Apple in decades. The plant, while usually operating on natural gas, can run on kerosene (with a low, 0.04% sulfur content) for backup, but not for more than 30 days per year. The plant’s main customers (about 10% of the total load) are government entities in New York City, including the school system, hospitals, and the Metropolitan Transit Authority’s subways and commuter trains. 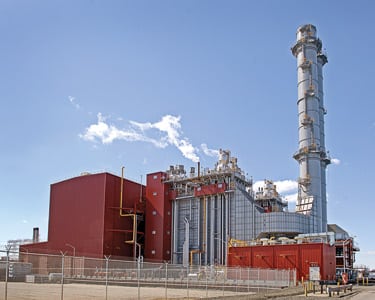 New York City’s generation rules are—like Gotham—unique. A mandate from the New York State Reliability Council and the New York Independent System Operator (NYISO) requires that 80% of the city’s peak demand be satisfied by power plants within the Big Apple’s five boroughs because of transmission constraints that limit its ability to import power. Collectively, those plants also must be able to produce 30% more electricity than the city soaks up on the hottest day of the year.

A July 9, 2006, New York Times editorial noted that the city "gobbles energy like contestants at the Coney Island hot dog eating contest." Power demand continues to grow at about 150 MW/year. If huge proposed development projects on Manhattan’s West Side and in Brooklyn’s downtown are green-lighted, that number could skyrocket. Cleanliness also is an issue for resource planners. According to Mayor Michael Bloomberg’s energy task force, as much as 3,000 MW of older capacity should be retired and replaced with more fuel-efficient and environmentally friendly technologies.

New York City has been on the ragged edge of reserve margins for so long that predictions of summer blackouts and brownouts have become an annual routine. It’s a good thing that NYPA is still watching the megawatt-hour meter. In August 2000, NYPA began a crash program to install simple-cycle gas turbine plants at six sites in the city and one on Long Island with a total capacity of 460 MW. The PowerNow! Project—a response to predictions of severe power shortages in the summer of 2001—proved its worth during summer 2003, when Consolidated Edison Inc. (New York City’s native utility) and the Long Island Power Authority each set demand records, despite the infamous northeast blackout of August 14.

The $650 million NYPA Astoria Project, which began commercial operation last New Year’s Eve, sits on a 7-acre parcel in the Astoria neighborhood of the borough of Queens, adjacent to NYPA’s 30-year-old, 885-MW gas-fired Charles Poletti Power Plant. NYPA purchased the Poletti plant—then known as Astoria 6—from Con Edison in 1974 while it was still under construction. The plant came on-line in 1977, and three years later it was retrofitted so it could burn gas as well as oil, its design fuel. (Don’t confuse NYPA Astoria with another 500-MW combined-cycle plant being built in Queens by Astoria Energy LLC; Phase I of that project went commercial on May 21 of this year.)

NYPA Astoria’s site, overlooking the East River, has been used principally for power generation since 1905. With access to an existing natural gas pipeline and transmission lines, and on-site liquid fuel tanks, it is an ideal spot to put another plant. The adjacent Poletti plant is scheduled to be shut down not later than 2010. Setting an actual close date won’t happen until NYISO determines that closing Poletti’s doors would not cause the capacity of New York City’s other plants to violate the aforementioned "80% rule" and thus put reliability at risk.

The Astoria project team (see table)—consisting of NYPA, Skanska USA Civil Inc. (through its subsidiary Slattery Skanska), New York–based DMJM Harris, and General Electric/Sargent & Lundy—was responsible for the overall permitting, design, procurement, and construction of the plant. A key task was the erection of a 97,000-square-foot, two-story main building—topped by twin 240-foot-tall stacks (Figure 2)—to house the power block. 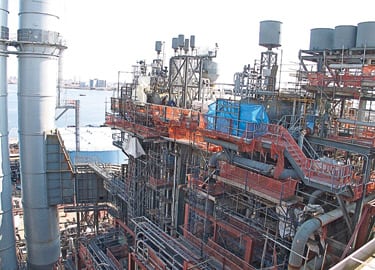 Skanska did the civil, structural, and mechanical work itself, including construction of three buildings on the property: the main building (which houses the two gas turbines, two HRSGs, and the steam turbine), a gas compressor building, and a chiller building. Within the chiller building is equipment that produces chilled water for cooling the gas turbines’ intake air (increasing their output), a one-million-gallon water tank, and a 32-module air-cooled condenser (ACC). 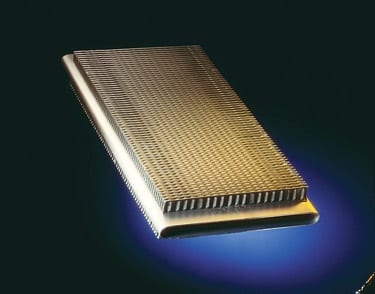 NYPA Astoria’s twin 240-ft exhaust stacks were prefabricated in Bayonne, N.J. in four, 120-ft sections and barged to the job site. Final fabrication was completed off-site, because Con Edison liquefied natural gas (LNG) storage tanks are very close to the site of the new plant. The LNG tanks are equipped with very sensitive flame detectors that had to be secured while welding was done on the Astoria job site. The completed assemblies were then hauled about a quarter-mile to the job site for erection.

Skanska also managed E-J Electric’s installation of the plant’s electrical systems, comprising a digital control system, three step-up transformers, and switchgear. DMJM Harris and the construction team worked together to push the schedule forward and to mitigate the impact on construction of final engineering design changes, which were being made at the same time. The project team worked closely to prioritize the design sequence to facilitate construction. Meanwhile, the engineering team (GE and Sargent & Lundy) placed design personnel on-site to provide solutions to any problems that arose during construction.

Because soil conditions at the plant site were not sufficient to hold the heaviest equipment securely in place, Sargent & Lundy devised a system of "H" beam piles below all of the facilities, equipment, and building foundations. Skanska installed more than 4,500 "H" beam piles for the foundations.

At one point, almost 200 electricians were working two shifts (from 7 a.m. to 3:30 p.m., and from 4 p.m. to midnight) to complete the project. According to Tony Mann, president of E-J Electric, they started the double shifts in the spring of 2004 in an effort to meet Con Edison’s scheduled backfeed date of May 1, 2005, in spite of weather delays and the late arrival of structural steel.

NYPA has shown other developers the proper etiquette for developing a power project in Queens. As part of the NYPA Astoria development agreement, the NYPA is investing more than $50 million over five years in energy-efficiency and clean-energy projects in Queens and other boroughs. Statewide, the Authority is investing up to $100 million a year in such initiatives for tax-supported public facilities, with its efforts yielding considerable benefits, including annual savings on electric bills of more than $93 million and reduction in oil use by 1.7 million barrels a year.

A 2002 agreement with the Borough of Queens and environmental groups included a provision limiting operating hours of the existing Poletti project once the new combined-cycle plant began supplying electricity. NYPA will limit Poletti’s capacity factor to 30% on a three-year average, with no single year above 35%.