Tokyo Electric Power Co. (TEPCO)—the world’s largest private power company—traces its roots to the illumination of a lecture hall by an electric arc lamp at Tokyo’s Institute of Technology on March 25, 1878. That was more than four years before Thomas Alva Edison’s Pearl Street Station began operation in New York City. Tokyo Electric Light Co., Japan’s first electric power company, began commercial operation in 1887. TEPCO was born in 1951, when it became one of nine utilities created by the government’s restructuring and consolidation of the country’s electricity sector.

TEPCO also is an old hand at designing and building large pumped-storage projects; hydropower accounts for over 14% of the utility’s installed capacity of 63,000 MW. In Japan, which has virtually no indigenous fossil-fuel resources, pumped-storage plants play an important role in stabilizing grids and in improving the efficiency and economics of hydropower generation.

By comparison, hydropower accounted for 8.7% of U.S. generation in 2004. America has about 19,000 MW of installed pumped-storage capacity, but the "real" total actually is a negative number: –5,500 MW. That’s because it takes anywhere from 10% to 30% more power to fill a pumped-storage plant’s reservoir than is recovered when its contents are emptied into hydro turbines. Although, on a net basis, pumped-storage plants consume more energy than they deliver, they serve a very useful purpose: the ability to respond very quickly to a load increase on a grid. Having a source of power that can be dispatched in minutes (seconds, if the turbines are already spinning) to trim peak demand well justifies its capital and operating costs. A pure-pumped storage plant also can be a source of "black start" power and provide the full range of ancillary services needed in today’s competitive wholesale electricity markets.

TEPCO’s Kannagawa Hydropower Plant (KHP), which is now about half-finished, is a "pure" pumped-storage plant; that is, water is pumped from a lower reservoir to a higher one during off-peak hours and released when there is an immediate need for power. What Figure 1 doesn’t quantify is that the water tunnel (the red dotted line) connecting the lower and upper reservoirs—created by the Minamiaiki Dam and Ueno Dam, respectively—is 3.8 miles long and spans two different prefectures. What it does illustrate are the number and size of the turbines envisioned—six, rated at 470 MW apiece (Figure 2). The power house in which the turbines "live" was built in a large cavern 708 ft long, 108 ft wide, and 169 ft high, at a depth of about 1,600 ft. 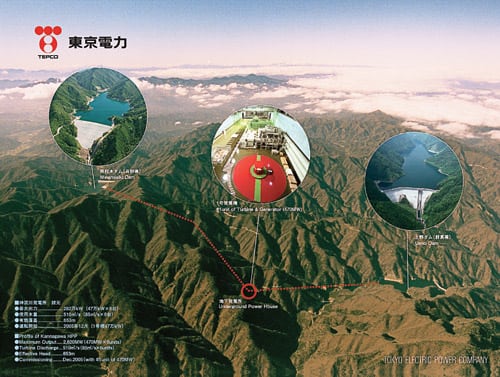 1. Major water works. At 2,820 MW, the Kannagawa Hydropower Plant will be the world’s largest pure pumped-storage plant when all six of its units are completed—in 2016 at the earliest. Unit 1 entered commercial service in December 2005. Courtesy: Tokyo Electric Power Company Inc. All rights reserved. 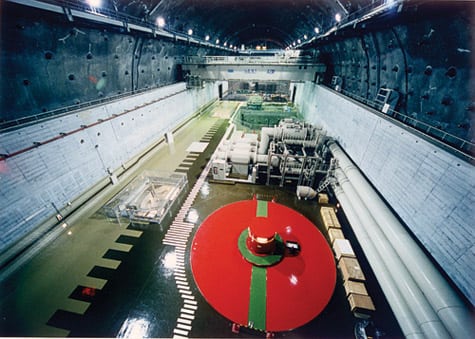 2. Cave dwellers. The turbine floor is 1,600 feet below the surface, in a cavern hewn from rock. Courtesy: Tokyo Electric Power Company Inc. All rights reserved.

TEPCO has relied on decades of experience to execute a project whose technical challenges would have daunted a neophyte. Back in the 1960s, TEPCO cut its teeth on a series of smaller pumped-storage projects, topping out at 600 MW. The 1970s saw the development of larger facilities, including the 1,280-MW Shintakasegawa mixed-type hydro plant. The 1980s began with the commissioning of TEPCO’s first pure pumped-storage plant—the 1,200-MW Tamahara project—in 1982 and ended with the successful completion of three other plants of the same type.

Kannagawa, which is TEPCO’s ninth pumped-storage plant, bumps up against what may be the technological limits of building such facilities (details to be presented later). However, with an expected rated capacity of 2,820 MW, KHP’s design represents the largest plant of its type in the world. The project recently bore its first fruit after more than a decade of cultivation. Unit 1 began test runs in December 2004, and it was declared commercial in December 2005. The next crop of kilowatt-hours is still years off, however; Unit 2 is scheduled to enter commercial service in 2010, and Units 3 through 6 won’t be commissioned until 2016 or later.

Construction of KHP began in July 1993 with TEPCO’s establishment of a field survey office for the project, two years ahead of its approval by Japan’s Electric Power Development Coordination Council. Construction of the two dams powering KHP officially began in May 1997. By September 2004, both dams had been completed and the upper one had been filled to capacity, allowing testing to begin.

Designers of a pure pumped-storage plant typically seek to minimize its capital and operating costs by employing either of two techniques: making its hydro turbines more efficient, or boosting the overall plant’s rated capacity by increasing the available head (the difference between the two reservoirs’ elevation). Two side benefits result if a plant is designed for a higher head: The facility can be made smaller and still produce the same output, and the size of the turbines’ discharge can be reduced. For those reasons, TEPCO chose to increase KHP’s available head. This decision necessitated the company’s development of its "high-efficiency/high-head pump-turbine" as a breakthrough technology.

TEPCO responded to this challenge by developing a pump-turbine with an effective head of over 2,300 ft and a unit output greater than 400 MW. To meet those specs, TEPCO’s designers had to solve some very tough problems. They included the typical decrease in the operating efficiency of pump-turbines when subjected to higher effective head, the turbines’ limited load adjustment range, and the limited range of dam-water level variation during real-world operation. Adding to TEPCO’s difficulty, the industry’s experience had been that standard pump-turbine runners capable of handing 1,000-ft effective heads would break if pushed to 1,600 ft—rendering conventional runner design obsolete.

Worldwide hydropower generation technology is a century old but is just now reaching technical maturity. In the past, technological innovation focused on improving turbine efficiency by just 0.1%. By contrast, TEPCO’s development of the pump-turbine runners for Kazunogawa and Kannagawa increased turbine efficiency by more than 1.5%. The new runners also expanded turbine output adjustment range and operational water level range by more than 10% while reducing by half the stresses from water pressure acting on runners (Figure 4). To sum up, the new runners featured the best of both worlds: better hydraulic performance as well as improved turbine quality and reliability.

In addition, due to limits on water pressure inside pump-turbines, worldwide pump-turbine technology had stagnated at an effective head of about 1,800 ft and a unit output of 300 MW since 1980. On the Kazunogawa and Kannagawa projects, TEPCO introduced the world’s first high-efficiency high-head pump-turbines—with an effective head of over 2,100 ft and a unit output greater than 400 MW—by developing and using splitter runners.

It was accepted practice in pump-turbine design that increasing the number of blades (or runners) would increase frictional losses and reduce unit efficiency. However, recent computational fluid dynamics (CFD) analyses have revealed that in runners, turbulence losses are far greater than frictional losses. The analyses also found that increasing the number of blades reduces turbulent loss and dramatically increases turbine efficiency (Figure 5).

However, in the past, increasing the number of blades narrowed flow paths and prevented runners from discharging enough water to allow turbines to produce large outputs (even at high flow rates). TEPCO overcame this problem by fitting runners with both long and short blades. As a result, the company was the first in the world to develop and deploy pump-turbines with splitter runners (Figure 6). 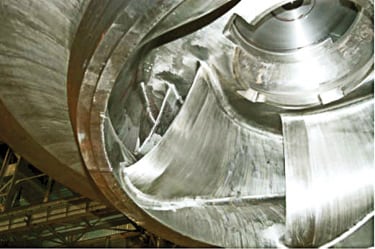 Hydraulic performance tests on a 1/9-scale mockup revealed the following advantages of the new, splitter runners (compared with traditional runners):

It’s worth noting that TEPCO’s advanced pump/turbine runner design has been chosen for use on the Xilongchi Pumped Storage Power Plant Project in Shanxi Province, China. The first of four units at the plant—which will have a maximum head of 2,306 ft and a total capacity of 1,200 MW—is scheduled for startup in August 2008.

TEPCO matched its innovation in runner design by applying some novel techniques to the construction of Kannagawa’s underground water infrastructure. In the pumped-storage world, it is common practice to connect two reservoirs by first drilling a small pilot tunnel from the bottom reservoir up, and then drilling and enlarging the tunnel from the top down. To avoid this long and laborious process, TEPCO used a "full-face tunnel boring machine" (TBM) to drill the penstock tunnel (which is inclined 48 degrees, approximately 20 ft in diameter, and more than 3,000 feet long) in one fell swoop, from the bottom to the top.

The TBM (Figure 7), weighing in at 600 tons, is self-supporting, so it doesn’t slide down the steep incline. It also is equipped with a boring machine to survey soil up to 100 ft ahead. Ultimately, the TBM shortened the time needed to drill the penstock tunnel by about six months. Drilling through sold rock, it worked at an average speed of 225 ft/month. 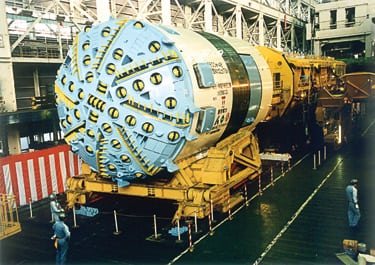 Another of TEPCO’s technical innovations was its use of high-strength steel in the lower portion of the penstock to cope with extremely high system pressures. Kannagawa is the first hydro plant to use HT-100 for penstock piping. Because HT-100 is lighter than standard steel pipe, the switch reduced penstock construction time by about three months.