When Des Moines–based Mid-American completed the purchase of PacifiCorp from ScottishPower in late March of this year, one of its prizes was the new, natural gas–fired 525-MW Currant Creek Power Plant outside of Mona, Utah (Figure 1). Baton Rouge–based The Shaw Group Inc. (www.shawgrp.com), through its subsidiary Shaw Stone & Webster, provided all of the engineering, some of the procurement (PacifiCorp purchased the combustion turbines, the heat-recovery steam generators, the main transformer, and the switchyard components), and all of the construction services for the combined-cycle project—which is notable for having "gone commercial" twice, as we’ll explain later. 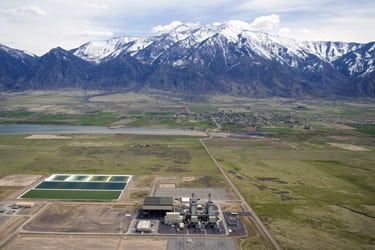 PacifiCorp, one of the lowest-cost electricity producers in the U.S., has 8,470 MW of net generation capacity representing a broad mix of fuels: coal, hydro, natural gas, wind, and geothermal energy. PacifiCorp operates as Utah Power in Utah and Idaho, and as Pacific Power in Oregon, Wyoming, Washington, and California.

In Utah, summer peak electricity demand has been growing at a sizzling 5% a year, about twice the national average of 2.6%. Accordingly, PacifiCorp’s resource planners determined that the company’s system would require new summer peaking capacity and new baseload capacity by 2005 and 2006, respectively. Thus the Currant Creek project was conceived as the first large (>300 MW) power plant built by PacifiCorp since 1983, when the third unit of the Hunter Power Plant in central Utah came on-line.

That the final bill for the project came in under $350 million (about $660/kW) shows that Shaw and PacificCorp know a thing or two about squeezing a plant construction dollar. For comparison’s sake, a very similar, utility-built 2 x 1 plant equipped with the same gas turbines (but with a less-costly wet cooling system) that recently went into service in California cost over $410 million to build. Western ratepayers got a real bargain with Currant Creek (Figure 2). 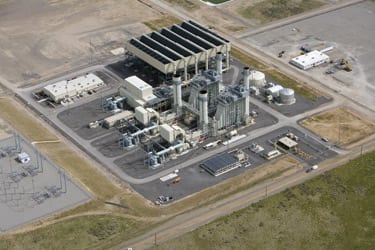 Managing construction costs on this project was essential, due to its remote site, lack of rail access, and fast-track project schedule. To expedite erection and mitigate risk to craft labor, Shaw Group shops in Louisiana and Utah were used to assemble major pipe racks, large portions of boiler feedwater, main steam and reheat piping, and other modular components. These major subassemblies were then trucked to the 160-acre site when required as part of the construction sequence. This helped the site to achieve an excellent safety record: more than 1.5 million hours worked without a lost-time accident (Figure 3). 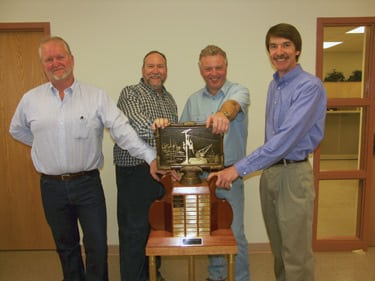 The same, but different

At first glance, Currant Creek is similar to many 2 x 1 combined-cycle plants based on the ubiquitous General Electric 7FA gas turbine (see the profiles of PSEG Power’s Linden Generating Plant and Bethlehem Energy Center). It has a nominal generating capacity of 145 MW at its elevation of 5,051 feet. The two triple-pressure, horizontal gas-flow heat-recovery steam generators (HRSGs)—manufactured by Louisville-based Vogt Power International Inc., a subsidiary of Babcock Power Inc. (Danvers, Mass.)—generate low-pressure (LP) steam at 78 psig and 565F, intermediate-pressure (IP) steam at 462 psig and 1,048F, and high-pressure (HP) steam at 1,950 psig and 1,050F from turbine exhaust gas at 1,125F (Figure 4). Currant Creek is supplied by a 1,075-psig dedicated pipeline that brings gas to the plant from a trunk line 13 miles away. 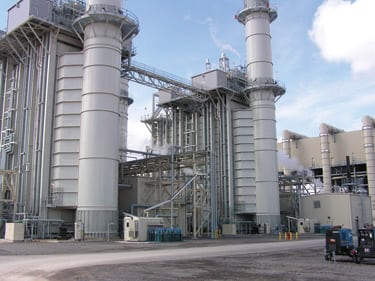 Each HRSG is fitted with natural gas–fired duct burners from Forney Corp. (Carrollton, Texas) that boost the unit’s output by 52 MW when they kick in. NOx emissions are kept under control by a selective catalytic reduction (SCR) system; its reagent of choice is aqueous ammonia. CO emissions are likewise reduced by a catalyst incorporated into each HRSG (see the table). Currant Creek’s steam turbine, from Toshiba, is rated at a nominal 250 MW. Its combined HP/IP cylinder is connected to a separate, double-flow LP cylinder (Figure 5). 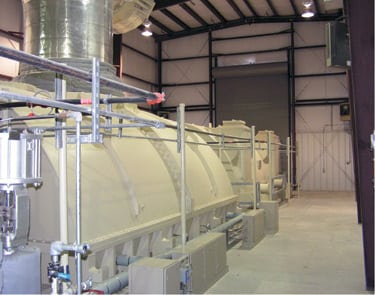 All power plants are local

Currant Creek’s design incorporates an air-cooled condenser that uses only 10% of the amount of water that a similarly sized plant with wet cooling towers would require. Supplied by GEA Power Cooling Inc. (Lakewood, Colo.), the condenser uses thirty 250-hp variable-speed fans (controlled by a computer) to maintain optimum vacuum conditions and maximize steam turbine performance over the wide range of ambient conditions at the plant site. In winter, the fans’ motors are reversed to pull warmer air across the finned-tube surfaces, ensuring that no part of the condenser could possibly freeze. The condenser is sized to maintain a vacuum of 6.7 inches (Hg) at 87F and to operate effectively during the summer, when the temperature may reach more than 100F (Figure 6).

What little water the plant needs (for feedwater and auxiliaries) comes from two deep-bore wells on the outskirts of Mona, near the I-15 freeway, 3 miles from the project site. A wet cooling system would have been much cheaper to build but more costly (in a different sense) in the long run. Locally, water is scarcer than hens’ teeth, and multi-year droughts have occurred twice in the past 20 years. PacifiCorp realized that buying up agricultural land to secure the necessary water rights wouldn’t have been neighborly. Investing in the air-cooled condenser was a no-brainer.

PacifiCorp paid just as much attention to effluent as influent. All wastewater streams from drains, boiler and evaporative cooler blowdown, and the water treatment plant are directed to a 20-acre evaporative pond nearby. Sewerage goes to an on-site septic tank. An all-volatile chemistry regime enables the plant to maintain satisfactory water chemistry without the use of hydrazine. The mixed beds of the water treatment plant are designed to be regenerated off-site, eliminating the need to bring in bulk acid and caustic and store them on-site.

The Currant Creek Plant was built in two phases, beginning in January 2004. The first phase focused on installing and placing into service the two simple-cycle gas turbines (totaling 280 MW) by the summer of 2005. Both were completed on June 10, 2005, and declared commercial on June 20, 2005—when they were turned over to PacifiCorp operations for dispatching to help meet summer peak demand. The second phase—completing the steam plant—took a back seat to serving prime-time load.

The safe operation of the two simple-cycle GTs last summer, while almost 500 tradesmen were on-site installing the steam turbine and HRSGs, was a testament to the skill and dedication of The Shaw Group and PacifiCorp. Personnel from the two companies had to work closely, on a daily basis, to identify and solve problems quickly—or court disaster.

One example of their ingenuity was installing a large hydraulic damper and a second steel safety plate (with an air gap between the damper and the HRSG) as the solution to the problem of keeping operators and craftsmen safely apart. Others included setting up a lock out/tag out procedure that worked for both teams and commissioning of the final plant’s distributed control system during the first phase.

The simple-cycle turbines ran without any forced outages throughout the 2005 summer peak season. On September 23, 2005, Currant Creek was removed from commercial service and put back under control of The Shaw Group for completion of construction of the steam plant. During the second phase, the two HRSGs and the steam turbine were installed, increasing the plant’s generating capacity by 245 MW to 525 MW. The entire combined-cycle plant was declared commercial on March 22, 2006, months before this summer’s peak-demand season.

Nearly continuous variable plant output and fast system response are two key features of Currant Creek’s design. The plant’s capacity can be set for any of several load ranges within 90 minutes of a call from dispatch. "One thing that’s really great about this plant is its flexibility," explained John Bowater, Currant Creek’s manager. "On high-demand days, it can respond very quickly and precisely."

Currant Creek’s flexibility is particularly valued by PacifiCorp’s commercial and trading group. They realize that any capacity that can be bid in discrete blocks has a better chance of being dispatched. Following are the five ways that Currant Creek can be configured, and the capacity range produced by that configuration:

The plant is designed for 250 to 260 starts per year and is typically dispatched for 12 to 15 hours per day, depending on the spark spread. To facilitate rapid start-ups, the HRSGs are equipped with stack dampers, and an auxiliary boiler has been provided to maintain vacuum in the steam turbine during overnight shutdowns. Those are two pieces of equipment that should be standard in any cycling plant.

In keeping with advances in modern control technology, Currant Creek has a small complement of staff responsible for day-to-day operations and maintenance. Technical support from PacifiCorp’s engineering group in Salt Lake City eliminates the need to assign full-time engineering specialists to the site.

Currant Creek has a staff of 24. However, five of those 24—the plant manager, a chemist/environmental specialist, a safety/training guru, a procurement professional, and an administrative whiz—will be responsible, beginning next summer on a 50/50 basis, for duty at the new Lake Side Power Plant being built by Summit Vineyard LLC and Siemens Power Corp. 40 miles south of Salt Lake City. As a result, the effective FTE (full-time equivalent) position count at Currant Creek will be a stingy 21.

First, do no harm

Bringing in almost as many construction workers as residents of the town of Mona (population: 750) would have been a recipe for disaster if The Shaw Group and PacifiCorp managers hadn’t recognized the potential for problems and dealt with them in a respectful way before groundbreaking. Many meetings with the town and county leadership paved the way for a wonderful working relationship.

It was The Shaw Group’s intent to leave the community better off than it had been before the workers arrived. They took the time to help with cancer and blood drives, for example, and to contribute to many other worthwhile projects. "We are mighty thankful you came to our county," said Robert Steele, Juab County commissioner. PacifiCorp also funded over $180,000 worth of projects that will directly benefit Juab County residents.