Controlling combustion often has been likened to a black art rather than a science. The physics of burning coal are as well understood as the design of steam generators. The art of optimizing combustion to produce minimal emissions comes into play when a boiler is asked to burn a fuel for which it was not designed and yet produce orders of magnitude less pollution than original permitted levels. We shouldn’t be surprised when a new round of boiler capital improvements is required every few years to comply with a new, lower NOx limit.

For many coal-fired plants, the recipe for optimized combustion has three ingredients: common sense, skepticism, and a willingness to lower expectations. Realize that maximizing the performance of every plant system isn’t sufficient to maximize the performance of the overall plant. A more holistic approach is required. The contributions of all systems to overall plant performance must be quantified and addressed separately and in concert. Permanently solving a combustion problem requires thoroughly understanding its underlying mechanisms, targeting them with good engineering practices, and having the patience to try different solutions until the desired results are achieved.

The antithesis of this approach would be succumbing to the temptation to look for the easy way out. Be skeptical of vendors’ claims. Don’t expect to solve your combustion problem overnight by buying the latest widget or software package and expecting your already-overburdened O&M staff to find a way to make it work.

About the patient and project

The 126-MW AES Westover Station in Johnson City, N.Y., provides an excellent case study of how applying the fundamentals and taking a holistic approach to a combustion problem can yield exemplary results. Westover Station Unit 8 is a tangentially-fired unit manufactured by Combustion Engineering (now Alstom Power) whose original steam conditions were 620,000 lb/hr of main steam at 1,475 psig. Superheat and reheat temperatures are 1,005F. The unit now has a gross output of 88 MW. The steam generator’s furnace measures 24 ft, 10 in. deep by 25 ft, 4 in. wide. The boiler’s 16 burners at four elevations are fed by four Raymond No. 533 deep-bowl pulverizers.

When Unit 8 entered commercial service in 1951, its NOx emission rate was typical of the time—0.6 to 0.9 lb/mmBtu with 3% loss-on-ignition (LOI). Subsequent combustion modifications reduced the rate to about 0.5 lb/mmBtu but raised LOI to 20%. Plant management was asked to modify Boiler 13 as needed to lower its NOx output below 0.32 lb/mmBtu as part of an AES fleetwide emissions reduction plan. The other goals of the project were to:

A coal-fired unit’s combustion efficiency, emissions performance, operability, load response, reliability, and capacity are intimately related. Nonetheless, Westover staffers believed it would be possible (but difficult) to reduce the NOx level and simultaneously increase the excess oxygen level at the furnace exit without adversely affecting unit capacity, output, or reliability.

The first step they took (prior to actually modifying the combustion system) was to optimize the furnace inputs in order to minimize secondary combustion and the consequent potential for overheating superheater and reheater tube metals. Next, they installed air diverters and fine-tuned fuel fineness and distribution and airflows to minimize waterfall fire-side wastage in the lower furnace and wastage in the sub-stoichiometric firing zones.

At this point, Westover’s engineers drew on their experience and decided that brushing up on the basics of combustion would be prudent before taking another step. The words of any project plan can be changed or erased, but once steel is cut, any further changes would cause pain in the pocketbook.

Westover staffers began the next phase of the project by reacquainting themselves with the essentials of optimum combustion. The 13-item checklist of the practical fundamentals of good combustion system design (see box) can guide an audit to ensure that a system is already in tune before significantly upgrading it. Consider this analogy. You wouldn’t make a big change to your car’s combustion system—like adding a supercharger—without first changing the plugs and oil and air filters and adjusting the timing, would you? If you failed to do so, you wouldn’t know what the engine’s baseline performance was, so you couldn’t quantify the benefit of the change.

The checklist reminded Westover staffers what they would be wise to upgrade before making major modifications to the combustion system. They installed new fuel line orifices to improve "line-to-line" balance within the prescribed +/-2% limit. To ensure that the plant’s distributed control system was indicating the correct air flow within 2%, they calibrated the measuring venturi by performing a cold "K" factor test and several hot "K" factor tests over Unit 8’s load range. New auxiliary air diverters installed during the tests helped confirm that airflow measurements were up to spec.

Next, based on their experience, the Westover staff realized that, even though no fuel changes would be made, upgrading the unit’s pulverizers would be de rigueur for the success of the planned combustion system upgrade. The last two items on the checklist define the pulverizer performance that had to be achieved before going further. Mods made to the pulverizers included:

The ability to precisely control airflow is the most important characteristic of a combustion system because efficient combustion is a prerequisite for low-emissions steam generation. On Unit 8, staff installed a fan-boosted overfire air (OFA) system that reduces NOx by "staging" combustion.

Figure 1 is a schematic of the OFA system—designed by Storm Technologies—at Westover Station. Up to 25% of the 600F combustion air supply from the air preheater is ducted directly to the booster fan and on to the OFA ports in the upper furnace, bypassing the burners (Figure 2). Not shown in either figure are the two venturis and manually operated dampers used to measure and control the flow to the individual OFA ports.

2. Applying the essentials. A holistic perspective of the impact of individual boiler systems on overall

Fuel and air are staged within the furnace both vertically (by controlling burner tilt) and horizontally, thus making use of the entire furnace volume. Horizontal staging is effected by air diverters, which were added to auxiliary air buckets. It is essential to maintain an oxidizing environment on the waterwalls to protect them from wastage. Diverting some secondary air toward the furnace walls further stages combustion while providing additional protection for furnace tubes.

The OFA system’s booster fan increases the pressure of combustion air to about 10 to 15 inches (w.c.). At that pressure, proper penetration velocities can be obtained at each of the eight waterwall openings (Figure 4). Penetration velocity is key to maintaining acceptable levels of flyash LOI and CO in exit gas. It also ensures that there is sufficient oxygen to complete combustion of the carbon char in flyash before it is quenched below ignition temperature in the boiler’s convection pass (Figure 5). The design challenge was to provide enough excess air to account for this practical aspect of combustion dynamics, but not so much that overall boiler combustion efficiency is needlessly reduced (Figure 6). 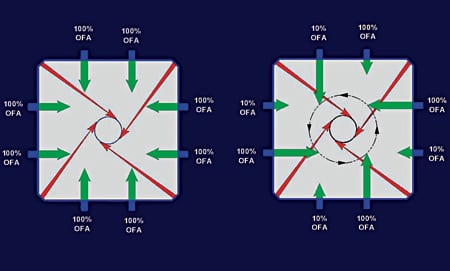 4. Stage presence. Overfire air reaching the OFA ports is pressurized to 10 to 15 inches (w.c.) to enable it to penetrate deep into the combustion zone. Courtesy: Storm Technologies 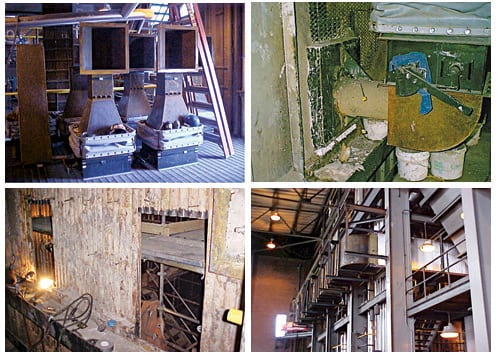 5. Tech support. Installation of the fan-boosted overfire air system required (right to left and top to bottom) adding new air ducts and dampers, replacing problematic dampers, making eight penetrations of the waterwall to accommodate the overfire air nozzles, and installing yards of ductwork to bring the overfire air to the ports on the furnace wall. Courtesy: Storm Technologies

Proof in the pudding

The project’s results demonstrate the value of applying the fundamentals of coal combustion to an emissions-reduction boiler retrofit. The data in Table 1, representing readings averaged over Unit 8’s load range, confirm that the project’s overall goal—reducing the unit’s NOx emissions below 0.32 mm/Btu—was met. Table 2 compares measurements taken at various unit loads immediately before and after installation of the OFA system in 2002. What Table 2 doesn’t show are the even-lower levels achieved by subsequent fine-tuning of the system. Examples include 0.18 to 0.20 lb/mmBtu at 36 MW and 0.28 to 0.32 lb/mmBtu at 83 MW.

Tuning for a single "design point" doesn’t make sense these days because nearly all coal-fired generating units now use a continuous emissions monitoring system to keep track of NOx emissions. However, keeping your unit in compliance over its entire load range still makes sense because it keeps the regulators off your back and gives your unit a wider range of loads at which the unit can be economically dispatched.

Since the combustion system modifications were completed four years ago, Westover Unit 8 has operated more reliably as well as more cleanly. Between 2002 and 2005, its equivalent availability factor averaged a shade over 92%. Over the same period, equivalent forced outage rate has steadily declined, from 3.44% in 2003 to 1.74% in 2005.

A few more statistics underscore how beneficial and cost-effective the project was. The upgrades to Unit 8—which cost just $17.68/kW—cut daily NOx emissions from 5 tons to 2.8 tons, and the resulting gains in availability and generation revenues meant that the project paid for itself within three to four months.

The authors would like to recognize the entire staff of AES Westover Station for their considerable contributions to the success of this project and for their tireless work to restore Westover to operation after the flood  (see box).

How long can you tread water?

Operating and maintaining a power plant is challenging enough without Mother Nature adding to the workload. Both units of the 126-MW AES Westover Plant, on the east bank of the Susquehanna River, were inundated on the evening of June 27, 2006, when the river crested 15 feet above flood levels (Figure 7). River water rushed in so quickly that the operators on shift barely had enough time to take the plant off-line and secure as many systems as possible before scampering to safety. For a plant that, it seemed, had seen it all over the past 50 years, water pouring through burst safety-glass windows, flooding the basement, and rising within four feet of the steam turbine was a new experience. On the bright side, the main control room was spared from flood damage. 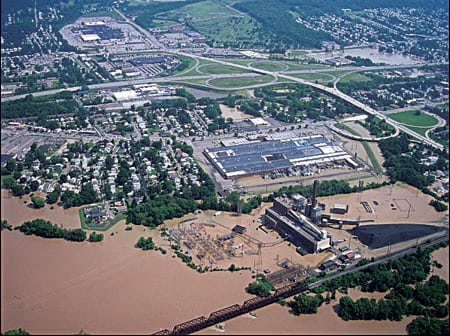 7. Up to their necks. Westover Plant took on 15 feet of water when the Susquehanna River crested in late June. Cleanup and repair of auxiliary equipment were required. Courtesy: AES Westover Station

It took three days to pump an estimated four to five million gallons of water out of the plant. The flood left much electrical and electronic equipment waterlogged and in need of extensive renovation or replacement. More than 100 motors, several hundred junction boxes, and dozens of motor control centers and switchgear panels were soaked in water and covered in mud. Plant Manager Jim Mulligan noted, "We had to replace all the 2,300-volt switchgear and all the power and control cables for all the equipment in the pump room."

Within days, the Westover plant staff of 60—augmented by more than 100 contractors and AES employees from as far away as Oklahoma—began to resurrect the plant from its watery grave. Ironically, the repairs at the power plant required temporary generators to be brought in to provide lighting.

As of Friday evening September 1, both Westover units were back on-line, although repairs to auxiliary equipment will continue for months.