As load growth on U.S. transmission and distribution grids continues to shrink reserve margins nationwide, utilities are looking for new ways to meet demand peaks. Until recently, the most elegant (no moving parts) option at utility-scale levels—adding a sizable storage battery to a substation—remained just out of reach because available batteries weren’t able to meet the hours of discharge on a daily basis.

Hook up with the Electricity Storage Association

The ability to store large quantities of electricity for retrieval on demand has long been considered the Holy Grail of power transmission and distribution. For the past 15 years, the Electricity Storage Association (ESA) has been the primary springboard for developing and testing new technologies capable of making utility-scale electricity storage a reality.

For more information about the ESA, visit www.electricitystorage.org.

The main function of the system is to supply up to 7.2 MWh of electrical energy on demand for peak-shaving purposes. However, it also has a business purpose. According to AEP, the system will enable deferment of equipment upgrades to the Charleston substation for six or seven years, at which time the battery can be relocated to another substation and play similar roles there. The battery’s manufacturer—NGK Insulators Ltd. of Japan—expects the battery to last for 15 years, assuming that it will be charged and discharged 4,000 to 5,000 times up to 90% of its full capacity.

In addition to using the battery system to shave demand peaks, AEP envisions employing it to accumulate and store for subsequent dispatch electrical energy generated by intermittent generating units such as wind turbines and solar cells. The name given to the system—the Distributed Energy Storage System (DESS)—implies that it will have many applications on the utility’s T&D grids. "Our goal is to deploy plenty of distributed energy storage capacity on our grids over the next decade," said AEP Program Manager Ali Nourai. "We intend to have a very resilient system that can absorb customer-operated distributed generation capacity as it connects to our grid."

AEP and several other U.S. utilities are currently field-testing a variety of distributed energy storage systems. Although the Charleston battery project (which cost about $2,000/kW) was slightly more expensive than upgrading the substation’s components to handle higher loads, the system is expected to deliver many intangible benefits, including invaluable and unique operating experience.

The project was partially funded by a grant from the U.S. Department of Energy’s Sandia National Laboratories. Sandia will closely monitor the system’s performance during the first year of service and produce detailed reports that will help other potential users of energy storage better understand the costs and benefits of using bulk storage to prop up a grid being stressed by peak demand. Another NaS battery system of the same rating is being installed on Long Island and is expected to be in service by the end of 2006.

AEP chose the NaS battery system for its very high power density and its operating experience in Japan. Over the past decade, NGK and the battery’s co-developer, Tokyo Electric Power Co., have deployed in their home country NaS batteries totaling 150 MW of capacity.

AEP lucked out when it decided to install the DESS this June to demonstrate its peak-shaving ability because this July was one of the hottest in U.S. history. As Figure 2 shows, the system performed admirably, discharging to reduce afternoon demand peaks during a 7-hour period each afternoon and recharging overnight when demand is lower.

The NaS battery is particularly suited to this duty cycle because it operates at the high temperature of 570F. The regular cycles of charging and discharging maintain the temperature at that level. The system’s overall "round-trip" efficiency is greater than 76%. When the battery is not charging or discharging, internal electric heaters maintain a minimum operating temperature.

The "balance of plant" for the battery—a power conversion system rated at 1,250 kVA—was built by S&C Electric Co. (www.sandc.com). The system inverts the battery’s 600-VDC output to 480 VAC and delivers it to the AEP grid. At night, the process is reversed to recharge the battery. The S&C system communicates with AEP’s supervisory control and data acquisition (Scada) system to determine which of eight available peak-shaving profiles is best for dispatching the battery’s capacity.

The NaS battery itself comprises 20 modules that are connected in series and rated at 50 kW (60 kW peak) each. Figure 3 shows the cabinet that houses the modules at Charleston Substation. Each module consists of 320 individual cylindrical batteries, which are arranged in five sets of 64 series-connected cells to provide 50 kW of continuous power for 7.2 hours (360 kWh), or 60 kW of power for 3 hours plus 25 kW for 4.2 hours (adding up to same 360 kWh). 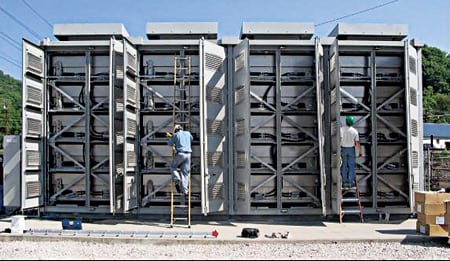 Each module is housed in a thermally insulated enclosure along with its electric heater. The individual cells are closely spaced and packed in sand, which helps contain the heat. The battery’s outer container—a steel housing from Kanawha Manufacturing—is a double-walled enclosure; a vacuum is maintained between the inner and outer walls to minimize heat loss. A finished 50-kW module weighs 7,700 pounds.

The addition of distributed energy storage systems to North American grids appears ready for prime time. As with all new technologies, capital cost is an issue, but the system’s compelling benefits will remain as economies of scale kick in to reduce prices. "The application of new technologies like the NaS battery system is essential to optimizing the performance of the nation’s power grids," said Robert Alworth, senior vice president of S&C Electric Co., at the July dedication ceremony for the AEP installation.

—Brad Roberts is director of power quality systems for S&C Electric Co. and vice-chairman of the Electricity Storage Association. He can be reached at 414-423-8776 or broberts@sandc.com.