The power industry will be challenged in the coming year to chart its strategic direction and meet investor expectations, although business conditions should take a turn for the better going into 2010.

The Obama administration is likely to provide many opportunities for the industry in 2009: economic stimulation, better definition of carbon law, the promotion of clean energy through tax incentives, and infrastructure development. However, these initiatives may not produce the intended benefits by the end of the year because they are linked to huge and complex problems. Many details will no doubt still be in draft form as we turn the calendar to 2010.

In the meantime, the power industry is faced with some tough challenges. First and foremost is deciding what kind of generation to build, when to build it, and where. Although the North American Electric Reliability Corp. (NERC) in its "2008 Long-Term Reliability Assessment, 2008 – 2017" report says that it sees a 4.2% improvement in capacity margins over its assessment in the previous year’s report, new resources are still critically required in some areas (Figure 1). 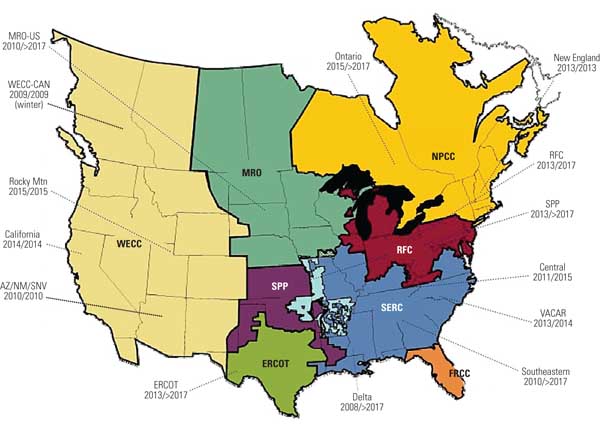 1. Scraping by. Acceptable electricity capacity levels will be available in most NERC regions of the U.S. for the next few years. The dates shown represent the date when net capacity resources drop below the NERC reference margin level with existing resources and when they are adjusted based on potential resources. Source: NERC

Net capacity resources are forecast to drop below NERC reference margins in 2010 in Arizona, New Mexico, and southern Nevada — a one-year reprieve over the prior forecast. Other areas in the U.S. are expected to hit capacity margin limits by 2013. Furthermore, critical transmission links are required to interconnect new sources of power with the loads, especially with respect to the major renewable resources: wind, geothermal, and solar. This, on top of the need to replace aging, less-efficient and less – environmentally clean older plants, will create considerable pressure for utilities to build… well, something.

The technology of last resort tends to be gas turbines — in combined cycle for intermediate and even baseload deployment. In some respects, this shuts out potentially more economic clean coal generation in the longer term and further increases the concentration of gas-fired generation in the nation’s fuel mix.

In fact, in recent years, new gas-fired generation has outstripped any other kind of new capacity because its upfront capital costs are low, siting and construction times are short, and gas is environmentally favored. Additionally, its optionality value is high, because it can serve flexibly in peak, intermediate, and occasionally base modes, although not always economically. It is also the most acceptable fall-back position for regulators and most likely for development as merchant generation.

Of course, the risk here is that increased use of natural gas for generation not only reduces the benefits of fuel diversity but also holds the potential to drive natural gas prices up. As we have witnessed in recent years, gas prices are highly responsive to demand, can be extremely volatile, and can run up to exceptionally high levels.

How Much to Bet on Gas?

The dash-to-gas trend has raised two interesting issues that regulators are likely to consider more often in 2009 and beyond.

Second, should regulators establish policies that require utilities to consider gas/electric fuel-switching for end-use applications such as water and space heating? A study produced by the American Gas Association Foundation in spring 2008 ("Direct Use of Natural Gas: Implications for Power Generation, Energy Efficiency, and Carbon Markets," American Gas Foundation, April 2008 [Black & Veatch provided the underlying technical analysis for this report]) demonstrated that greater overall energy efficiency could be achieved by substituting natural gas for electricity in certain end uses.

These policy proposals are not the idle musings of a consultant; they were suggested and discussed by regulators at the winter meeting of the National Association of Regulatory Utility Commissioners in early 2008 — before gas hit $14 per mmBtu (Figure 2). 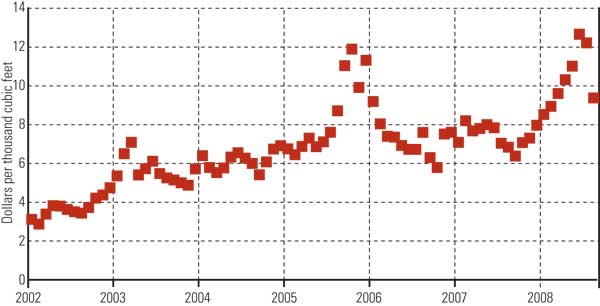 Finally, if Mr. T. Boone Pickens has his way, the diversion of natural gas to expanded transportation uses could further exacerbate the price and availability of natural gas as a generation fuel.

Partly in response to economic conditions and falling load growth projections, utilities are expected to reduce planned capital expenditures in 2009 by 10% to 15%, or by about $8 billion to $13 billion; in 2010, it could be another $10 billion to $17 billion. However, even with these reductions, capital investments for generation, transmission, and distribution will be substantial, averaging about $75 billion per year between 2008 and 2010.

If these costs were fully recovered during this time period, utility rates could increase, on average across the country, by between 6% and 8% per year. Of course, regional and utility-specific rate increases would vary substantially from this average, depending on the mix of new and existing generation and purchased power, as well as existing rate levels.

Furthermore, regulatory commissions could choose to reduce customer rate increases by deferring recovery of these costs through the creation of "regulatory assets" on the books of the utility or through other traditional deferred cost accounting methods. Though this would be good for customers, deferred cost accounting reduces the quality of utility earnings and, if carried to an extreme, can jeopardize bond ratings and increase utility capital costs.

With the residual effects of recently high energy commodity prices still filtering through to customer bills along with a stalled or declining economy, the political headroom for utility rate increases will approach zero in 2009. Only those utilities that must build plants for reliability reasons will be compelled to file rate cases. These utilities will increasingly seek construction preapprovals and other assurances from their commissions that they will be permitted to recover their prudent investments. Not only will preapprovals be more important, but changes in policies that currently prohibit recovery of construction work in progress will also need to be modified.

Is Smart Grid Investment at Risk?

Though some utilities will initiate the application of smart grid technologies (Figure 3) in 2009, the industry at large will not make investments that will materially increase rates. However, where smart grid elements are deployed, we expect that the cost of the investment will amount to between 5% and 10% of the average residential customer’s bill, before any offsets for the operating economies are achieved.

3. Growing interest. Smart grid technology is under development by several utilities across the U.S., including Xcel Energy and Duke Energy. Source: ABB

In 2009 and beyond, the industry challenge will be to demonstrate that real operating cost savings do, in fact, defray the initial costs of the investment. How any net incremental cost will be allocated, or socialized, will be another challenge worthy of the wisdom of Solomon.

There has been much debate as to whether the economy will slow the progress in smart grid and renewables development. Although these are urgently needed investments, and will see rapidly increased funding during the new administration, anecdotal evidence suggests that cutbacks or deferrals have already been made and will continue into 2009. Though the coming year will likely see some slowing of activity (but not an absolute drop) in these initiatives, 2010 and beyond appear more promising. In any event, it seems that the focus will remain on the "metering" dimension of a smart grid, with the development of some of the smarter upstream "grid" applications being deferred for at least a little while.

The estimates provided above are consistent with projections by the Energy Information Administration that rates will increase by 6% in 2008 and 9% in 2009. However, none of these estimates includes the costs of compliance with carbon regulation — neither the costs of emissions allowances nor the costs of plant modifications required to reduce physical emissions.

Under most of the anticipated legislative plans, compliance costs will be high, but they are unlikely to have substantial effects on rates in the 2009 – 2010 timeframe. When carbon legislation is passed, however, compliance could result in cost increases that are equivalent to between 20% and 30% of current rate levels. Again, how these higher costs will be phased in — or otherwise socialized through regulatory policy, taxes, utility rate structures, and deferred cost accounting — remains to be seen.

Clearly, the mix of potential rate increases attributable to normal systems growth and expansion, the implementation of smart grid technologies, and planning for carbon compliance represent daunting challenges for the industry.

The financial performance of investor-owned utility companies will be a point of intense focus in 2009. The current financial market turmoil, coupled with the adverse impact of a recessionary economy on utility sales, customer arrearages, and uncollectible accounts will undermine overall returns absent financial diligence and corrective action on the part of utilities.

In addition to reductions in capital expansion plans, utilities will continue to step up collections activities and reduce operating costs in every way possible without jeopardizing operations and reliability. However, large capital investments will still be required for reliability and adequacy, and sales will continue to decline, placing significant pressure on unit costs and the bottom line.

According to some reports, declines in utility sales resulting from the cessation of new residential and commercial construction, as well as old-fashioned price elasticity and general economic contraction, has been quite substantial and caught a number of utilities by surprise. Rate increases may be necessary to simply tread the murky financial waters.

With rating agencies taking a closer look at creditworthiness, banks being more restrictive, and the yield curve potentially remaining relatively steep, at least into the early part of 2009, cash flow and liquidity will be of paramount importance. Rate increases will be necessary, but the political will for such increases will be very weak. Utilities will find it increasingly difficult to justify rate increases, as well as the underlying investments, be they for the replacement of aging infrastructure, smart grids, or incremental investment to meet longer-term growth in load.

Furthermore, utilities will need to clearly articulate the basis for their requested cost of capital. With the cost of corporate debt currently at levels that approach or reach historical allowed returns on equity, and the spread between Treasuries and corporate bonds being so wide, the cost of capital determination in rate cases promises to get dicey, at best.

Regulators have a great opportunity to help the economy by restoring the value of the retirement portfolios of millions of middle-income investors by improving the quality of utility stocks held in those portfolios. Utility equities are one of the bedrock investments held in the pension plans of everyday working people — teachers, hospital workers, trades workers, union members, city and state employees, and blue and white collar workers of every description.

Under normal circumstances, utility stocks are relatively stable dividend-paying securities. They are the "growth and income" securities that provide the inflationary protection that retired and about-to-be-retired people need. By fulfilling their obligations to provide utilities with a fair opportunity to earn a reasonable rate of return and maintain adequate debt service coverage, as well as improving the likelihood that utilities will be able to recover the higher costs that are headed the industry’s way, regulators can help the economy at large.

Typically, the award of incrementally enhanced returns on equity has relatively little impact on the rates charged to customers, but the beneficial effects on utility equity values and dividends are substantial. A challenge for investor-owned utilities in 2009 will be to tell this story in a compelling and credible way to regulators and the public at large.