To overcome recent power shortfalls—and ensure they never occur again—Eskom is embarking on an immense infrastructure expansion program. The Build Programme, initiated in 2005, has been aligned with the government’s target of 6% GDP growth between 2010 and 2014, and estimates a 4% increase in electricity demand per year.

The utility’s ultimate goal is to deliver an additional 16,304 MW in generation capacity by 2017. This capacity is expected to double to about 80,000 MW by 2026. So far, the program has a board-approved budget of 343 billion rand ($43.1 billion) up to 2013. That budget is expected to grow to more than 1 trillion rand ($125.6 billion) by 2026. Eskom anticipates that generation projects will take up 73% of the budget, with transmission investment accounting for another 13%. The rest of the budget will fund distribution network improvements.

Three previously mothballed coal-fired power plants—Camden (1,600 MW), Grootvlei (1,200 MW), and Komati (1,000 MW)—are being retuned to service after a period of almost 20 years in long-term storage. These stations are being recommissioned to meet the short- to medium-term growth in demand. Camden should be completed later this year. The Grootvlei plant, which has posed numerous challenges to the Eskom team trying to refurbish it, should fully enter commercial operation by the end of 2009. Komati will reenter service in 2010.

This coal-fired baseload power station in Lephalale, Limpopo Province, will comprise six units rated, in total, at 4,788 MW installed capacity when fully completed in 2015 (see photo). These units are planned to be direct dry-cooled units such as those at Eskom’s Matimba power station in the same province. The unit’s construction was begun in April 2008. Hitachi and Alstom have been awarded the boiler and turbine contracts. 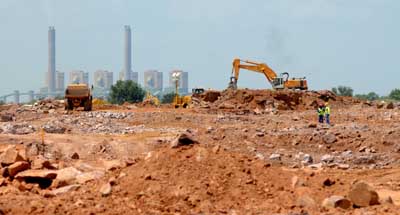 When it rains, it pours. With a name meaning “the rain that soaks parched land, giving economic relief,” Eskom has high hopes for the six-unit 4,788-MW Medupi power station it is currently building in South Africa’s northernmost Limpopo province. A second coal-fired project, the 4,818-MW Bravo power station, is also under way in the same region. Courtesy: Eskom

Situated close to Kendal Power Station in Mpumalanga province, this six-unit project, whose construction began in mid-August, will put out 4,800 MW when completed by 2017. The first unit will be commissioned in 2013. This power station will be the first in South Africa to have flue gas desulfurization installed for SOx removal.

In mid-September, a South African television station reported that the utility is also considering two additional coal-fired power plants to produce as much as 10,800 MW. These plants would be located in Limpopo, the nation’s northernmost province.

Eskom is planning an extension of the Ankerlig and Gourikwa power stations, which are rated in total at 1,043 MW. The building of five additional units at Ankerlig, rated at 149 MW each, started in August 2007 and will be complete in 2009. The second phase at Gourikwa involves the building of two additional 149-MW units, to be completed in 2009. Total additional capacity at both sites will be 1,043 MW.

The Ingula is South Africa’s first new pumped storage scheme in 25 years. In 1983, Eskom had built and started the Palmiet pumped storage plant in the Western Cape province. Now under construction near Ladysmith, KwaZulu-Natal, the Ingula will have an installed capacity of 1,352 MW. The station will comprise two dams—one at the top and the other at the bottom of the escarpment—and underground waterways, an underground powerhouse complex, access tunnels, and access roads. Water will be pumped up to the upper dam at times of low electricity demand and released at times of peak electricity demand to generate electricity via hydroelectric turbines. All four units will be commissioned in 2013.

Capacity at Arnot power station, near Middelburg in Mpumalanga, is to increase 270 MW. As of March 2008, 120 MW had been commissioned. The planned completion date for the last unit is the end of 2010.

Located on the West Coast near the town of Koekenaap, the wind energy facility is proposed to accommodate 50 turbines, each rated at 2 MW, for a total capacity of 100 MW. The turbines would be positioned over an area of approximately 9.65 square miles. The environmental authorization was issued in May 2008. Subject to the necessary approvals, the plant could be operational by the middle of 2010.

Among Eskom’s planned but unconfirmed projects is a 120 billion rand ($14.7 billion) nuclear power plant. AREVA and Westinghouse Electric Co. have so far bid for the contract, and Eskom’s decision is imminent, a September news report revealed. AREVA has proposed building two 1,650-MW reactors, while Westinghouse has offered three 1,140-MW reactors. Reuters reported earlier this year that the plant could be fully operational by 2016. It will be the first of five or six Eskom plans to build to help solve the energy crunch.