Ironically, the Spanish province of Tarragona — well known for its many Roman and Medieval ruins, archeological digs, and multiple World Heritage Sites — now has one of the most cutting-edge wind farms in the world. This wind farm recently added an innovative 3-MW wind turbine, which stands 140 meters (459 feet) high and is the largest nationally manufactured wind turbine installed in Spain to date.

In the 16th and 17th centuries, Spain boasted a powerful world empire. Later, however, the country’s failure to embrace the mercantile and industrial revolutions caused it to fall behind Britain, France, and Germany in economic and political power. Now, in the 21st century, Spain is reemerging as a leader on the world stage. This time, the country is being recognized as a global superpower for its aggressive use of renewable energy sources for electricity generation.

According to the Global Wind Energy Council (GWEC), the Spanish wind energy market saw spectacular growth in 2007, partly spurred by new legislation that foresees transitional arrangements for wind farms that started operations before the end of the year. A record 3,522 MW of new capacity were installed in Spain in 2007, more than doubling the 2006 increase and bringing the total to 15,145 MW.

The GWEC points out that there are times when wind can generate a greater percentage of Spain’s electricity than other generating technologies. For example, for a brief period of time, over a weekend at the end of March 2008, wind generated 40.8% (9,862 MW) of Spain’s total electricity consumed.

Conventional thermal power plants generate the largest share of Spain’s electricity, followed by nuclear and then hydro. But in 1999, the Spanish government set a target of providing 29% of the nation’s electricity from renewable energy sources (RES) by the year 2010. The European Union’s RES Directive of 2001 stipulates that by 2010, at least 29.4% of gross electricity consumption should be met by renewable sources. In 2005, the Spanish government also set a goal for the country’s installed wind power capacity to reach 20,000 MW by 2010. 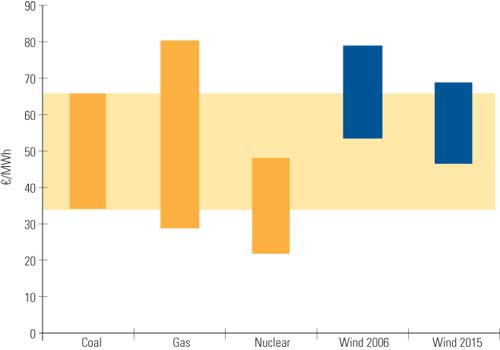 1. Cost of electricity. As this chart shows, in terms of euros per MW, wind energy costs are projected to go down in the next decade. Source: Alstom

The GWEC predicts that wind power will provide almost 29% of world electricity by 2030. In contrast, the International Energy Agency claims that 3.5% is more realistic. A report from the United Kingdom’s Royal Academy of Engineering concluded that wind power still costs two to three times more than nuclear energy, even after decommissioning costs are factored in. The dispute about percentages centers on the cost of back-up electrical generation needed for when the wind is not blowing.

Developed by Alstom Ecotècnia and installed this year at La Collada Wind Farm in the Spanish province of Tarragona, the Ecotècnia 100 turbine with its 3-MW output is the most powerful model ever designed by the company and achieves a higher output on a given land surface than earlier wind turbines. It belongs to a new generation of wind turbines that have greater performance and reliability. It was manufactured using some of the most innovative technologies available today (Figures 2 and 3). 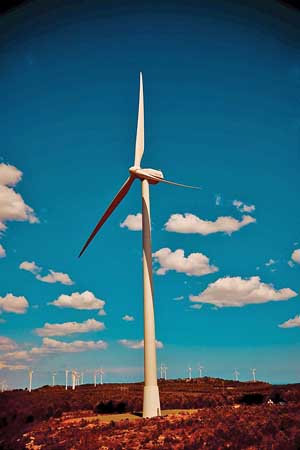 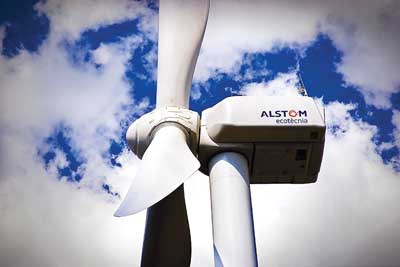 The Ecotècnia 100 has a unique design that protects the gearbox from deflection loads. The hub, supported directly by the frame on two bearings, is not supported by the gearbox, which is fully separated from the supporting structure. As a consequence, the wind-bending forces are transmitted directly to the tower through the mainframe, whereas only torque is transmitted through the low-speed shaft. Specifically, the wind turbine structure’s design — including a low-speed shaft, a gearbox, and a high-speed shaft — has been optimized to achieve greater availability of drive train components. This translates into higher reliability, higher operational availability, and lower maintenance costs.

Additionally, the Ecotècnia 100 wind turbine was designed according to Class II-A specifications of the IEC/EN-61400-1 standard. This makes it suitable for sites with a mean annual wind speed of up to 8.5 meters per second (m/s) (28 fps) and an extreme gust speed with a 50-year repetition frequency of 59.5 m/s.

Overview of the construction phase

Gleitz explained how, in the early stages of the construction process, the La Collada Wind Farm project team had to deal with a number of governmental agencies as part of the permitting process for this project. "The permitting process involved obtaining approvals from the following governmental entities: Environmental Department, Urbanism, Energy, and finally the City Council," he said. "At the same time, the developer of the project had to negotiate the conditions for the grid connection permits. In particular for this wind farm, the Civil Council (El Perelló Civil Council) has strongly supported and promoted its construction."

According to Gleitz, another part of the initial planning phase involved gathering information about predominant wind patterns in the region. The project team conducted comprehensive environmental and wind studies at the site, and the resulting data were used to specify wind turbine design requirements. The Ecotècnia 100 was chosen as the best technical solution for the site’s unique characteristics.

"Alstom designed the Ecotècnia 100 with ease of constructability in mind, which helped to minimize technical challenges for the developers," he said. "The mechanical components and control systems inside the nacelle and the hub are divided into two major modules, thus allowing independent verification of their integrity and operational status. This allows faster and simpler on-site testing during the assembly, installation, and maintenance stages."

Gleitz pointed out that this modular design limits the weight of the heaviest module to 85 tons and the maximum dimensions for each module to 4.5 x 4.3 x 9.7 meters (14.8 x 14.1 x 31.8 feet) (W x H x D). Lighter modules are easier to transport, necessitate fewer assembly crane requirements, and can be installed on more complex terrains because of their ease of transportation and installation (Figures 4 and 5). 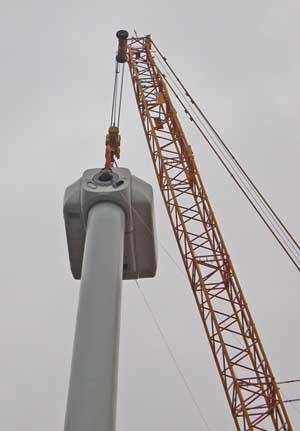 4. Getting ready for action. Lifting the rotors for installation into the Ecotècnia 100 turbine. Courtesy: Alstom Ecotècnia 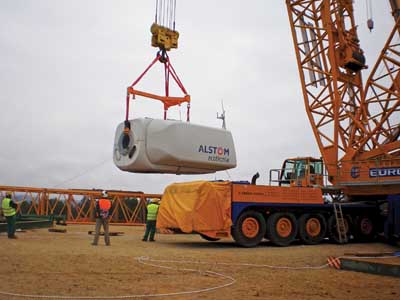 Fortunately, the 3-MW wind turbine did not face any challenges as far as grid interconnectivity or accessing transmission lines. The Ecotècnia 100 turbine is certified to comply with the newest Spanish regulations, according to Gleitz, which are among the most demanding codes in Europe. The turbine achieved full integration into the Spanish electrical grid without issue.

Because of the turbine’s large size, safety and ergonomics have been important elements in its design. "The nacelle allows the technicians full internal access to the rotor," he said. "Increased dimensions allow maintenance operations to be performed safely and easily. In addition, the nacelle is designed for ease of maintenance without the need for cranes. Wind turbine maintenance operations are faster and safer than ever and will be handled by a dedicated and knowledgeable staff."

At the time this article was written in October, the new turbine at the La Collada Wind Farm was still in its validation phase (power curve measurement, noise, and grid connectivity behavior). A small, dedicated team was dispatched to the site to support these tests. In addition, the team was handling the turbine’s minor maintenance needs.

When asked if the wind farm is scheduled to have additional capacity installed in the near future, Gleitz answered that three more wind turbines are expected to be installed by 2010.

Reaching out to the community

The La Collada Wind Farm project team realizes that it is important to have the support of nearby residents. According to Gleitz, in general, any wind farm has a positive impact on the local economy because resources and services required for the installation — such as transportation, civil works, and operations and maintenance — are provided by area communities.

"The end users in the area were extremely favorable towards the project," he said. "Many of the nearby residents have installed their own wind turbines, as well as solar installations. Due to the low tip speed, the Ecotècnia 100 is one of the ‘quietest’ wind turbines on the market, which the locals also viewed favorably."

Gleitz pointed out that, prior to installation of the new 3-MW wind turbine, the La Collada Wind Farm project team took special precautions to ensure that large numbers of wildlife, particularly birds, would not be harmed by its operations. In fact, due to this wind farm’s location, a specific study for eagles was required. Fortunately, specific environmental investigations, which were conducted prior to final site selection for wind power development, indicated that the area met all of the environmental impact regulations.

"The Ecotècnia 100, with lower tip speeds than other wind turbine models, further reduces the risk of an accidental avian mortality even more," he said. "The tube tower design also reduces the risk to birds, as they cannot nest into the tower structure."

Spain is the birthplace of the author Miguel de Cervantes, who wrote the famous novel Don Quixote, which later inspirated the Broadway musical Man of La Mancha and the song "To Dream the Impossible Dream." In the novel, written in the early 1600s, the author portrayed the main character tilting (or jousting) at windmills to show what an impractical idealist he was. No doubt some critics of renewable energy think that proponents of wind power in Spain are just modern-day Don Quixotes wasting their time with wind turbines instead of using fossil fuels or nuclear energy to generate electricity. Advocates of wind energy see a much different picture.

"We believe that wind power will play an increased role well into the future for Spain’s electrical generation," said Gleitz. "The government has established a goal for the installation of 20.1 GW of wind power by 2010 and is well on the way to achieving this. There are several new wind farm sites currently under investigation, as well as several off-shore locations."

Not only has the Spanish government set goals of 20.1 GW of wind power by 2010, but it also has set overall renewable levels for other technologies, he commented. Spanish regions have each established their own renewable goals in order to achieve the country’s overall goal.

According to Gleitz, forecasts for global wind generation show growth increasing fivefold from now to 2020, at which point wind would supply 3% of the world’s power (today it supplies less than 1%). China and the U.S. are predicted to lead this growth, with Spain not far behind.

"Spain’s future in wind is extremely bright," he said. "Already a dominant world supplier, manufacturer and power generator, many of the country’s largest suppliers had the foresight to establish facilities or projects in high-growth areas well ahead of the competitors."

The backers of wind energy and other types of renewable energy in Spain are now focused on achieving the very possible dream of having the country be primarily powered by clean energy within the next few decades.