An underdeveloped and costly CO2 capture technology, as well as regulatory and legal uncertainties over CO2 capture, injection, and storage, are the some of the more critical factors that impede carbon capture and storage (CCS) deployment in the U.S., the Government Accountability Office (GAO) — a congressional investigative arm — has reported.

In its report, "Federal Actions Will Greatly Affect the Viability of Carbon Capture and Storage As a Key Mitigation Option," released in late September, the GAO found that a key technological barrier to CCS deployment was a lack of experience in capturing significant amounts of CO 2 from commercial-scale power plants. The significant cost of retrofitting existing plants, which it deemed "the single-largest source of CO2 emissions in the U.S.," also hampered deployment. Among the regulatory and legal uncertainties cited as inhibiting carbon storage deployment were questions about liability concerning CO2 leakage, and ownership of CO2 once it has been injected underground.

The GAO had been commissioned by the House Chair of the Select Committee on Energy Independence and Global Warming earlier this year to submit a report on what it deemed were key economic, legal, regulatory, and technological barriers impeding commercial-scale deployment of CCS technology. The report also reviewed actions undertaken by the U.S. Department of Energy (DOE), the Environmental Protection Agency (EPA), and other federal agencies to overcome barriers to commercial-scale deployment of CCS technology. To make its determinations, the office examined key studies on CCS, and it interviewed industry stakeholders, environmental organizations, and researchers at think tanks and universities to get their perspectives.

According to the Intergovernmental Panel on Climate Change, the National Academy of Sciences, and other authorities, without a national strategy to control CO2 emissions — through an emissions plan or a CO2 tax, for example — the power industry has little incentive to capture and store its CO2 emissions, the report said. The absence of a national strategy also deterred agencies from resolving practical issues concerning CCS deployment, such as how sequestered CO2 will be transported from power plants to appropriate storage locations, and how CO2 would be treated in a future CO2 emissions plant.

With respect to what the DOE and EPA have done to address the issues that impede CCS deployment, the GAO found that both federal agencies had yet to comprehensively tackle the full range of issues that would require resolution for large-scale deployment. The GAO said that the DOE had achieved limited results in lowering the cost of CO2 capture from existing coal-fired power plants. "A major reason is that the agency has focused on ‘Integrated Gasification Combined Cycle’ (IGCC) technology, a promising technology for new coal-fired power plants, but one that is less useful when applied to existing coal power plants," it said.

The DOE had shifted its focus to technologies to help existing plants lower their CO2 emissions as recently as this year, the GAO noted, starting with an emphasis on the development of post-combustion capture of CO2 (Figure 7). The DOE told the GAO that this was for several reasons. First, because the U.S. had a large number of existing pulverized coal power plants; second, because Congress had told the DOE to do so in a report accompanying the agency’s 2008 financial appropriation; and third, because any advances made could be applied to the large number of coal plants under construction in India and China. 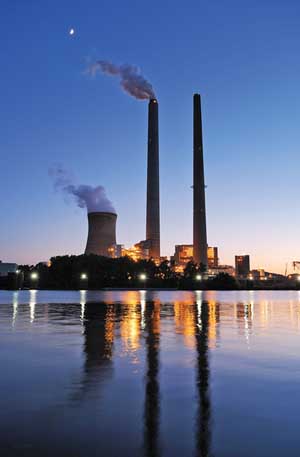 The EPA’s issuance in July 2008 of a proposed rule to guide the permitting of commercial-scale CO 2 injections under the Safe Drinking Water Act had at least addressed some key issues, the GAO found in its assessment. But it had left unresolved regulatory guidelines on how the Clean Air Act; the Comprehensive Environmental Response, Compensation, and Liability Act; and the Resource Conservation and Recovery Act apply to injected CO2. The EPA agreed with the GAO’s recommendation, the report said, and the agency said it would provide clarity on how statutes within the agency’s jurisdiction may apply.

The Federal Energy Regulatory Commission, the Surface Transportation Board, and Departments of Interior and Transportation had done little within their jurisdictions about a number of interdisciplinary issues that could delay CCS if they were unaddressed, the GAO found. This included a legal and regulatory regime for a national CO2 pipeline infrastructure and a plan for addressing CO2 emissions reductions from CCS in a future emissions trading plan. The GAO suggested that a more centralized task force with a broader mission could bring the agencies together, and it recommended that the Executive Office authorize the interagency effort.