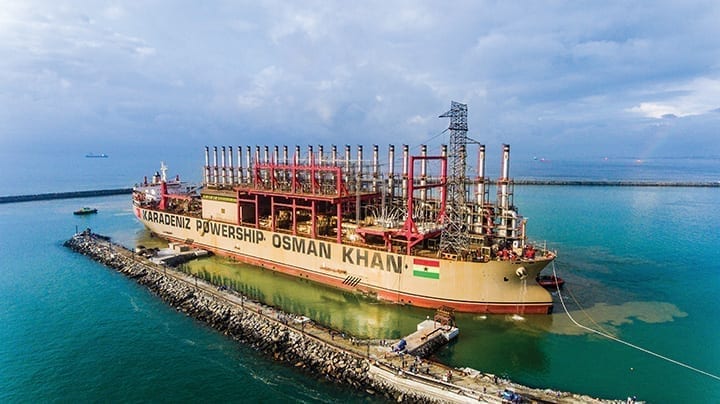 Karpowership’s 470-MW floating power plant deployed at two locations in Ghana demonstrated how robust an impact the innovative “plug-and-play” electricity delivery model can have on a power-hungry country’s economy and society.

Zeynep Harezi, chief commercial officer of Karpowership, recalls a poignant moment around mid-August 2019, as the Karadeniz Powership Osman Khan prepared to set sail from a fishing village at Tema, on the eastern coast of Ghana, to the Sekondi Naval Base near Takoradi, about 300 kilometers to the south. Tema had been the first destination for the Osman Khan, which had only been completed and launched in 2017 as the largest Powership in Karpowership’s fleet. At 300-meters(m)-long, and 50-m-wide (Figure 1), it had towered for two years in a harbor that fishermen had traditionally used to dock their wooden canoes, supplying 450 MW, or about 26% of Ghana’s generated power, with heavy fuel oil (HFO).

Before the Osman Khan arrived at Tema, Karpowership had sent the much smaller 235-MW Aysegül Sultan in 2015 to initiate a 10-year, 450-MW power purchase agreement (PPA) that Karpowership, a global subsidiary of Istanbul, Turkey–based Karadeniz Energy Group, signed with the Electricity Co. of Ghana (ECG) in June 2014, Harezi explained. “At first we felt like an unwelcome guest,” because the vessel occupied a prime spot at the busy Tema harbor where the fishermen earned their daily catch, she said. But the benefits of a steady supply of power quickly began to transform industry in the region that lies east of Ghana’s capital Accra. For the residents at Tema, the threat of unpredictable outages—which they had suffered frequently, and at times for more than 24 hours—was suddenly vanquished, and they could now use refrigerant systems to attract bulk buyers for their fish.

And though Karpowership’s model is mobile, like stationary power plant developers around the world, the company did all it could to garner community support. “We gathered community meetings and asked them what they needed,” said Harezi. “They needed fishing nets, water tanks [for fresh water], fishing mesh, fridges. We donated new bathrooms to all the local schools, a library, a computer lab, and since the beginning of our operations, scholarships to hundreds of kids,” she said. “It was such a wonderful relationship. The whole community, ultimately, was sad that we were leaving.”

The Ghanaian project was Karpowership’s first in Africa, but it marked a pivotal milestone for the company, which only began its innovative floating power supply model in 2010. The 1948-established Karadeniz Energy Group has forayed into energy markets since 1996 with its first land-based power plant located in southern Turkey. In 2003, when it became the first private electricity exporter in Turkey, Karpowership’s first Powership opportunity emerged from a cross-border export agreement Karadeniz signed with Iraq, said Harezi.

“We had already been approached by various mining companies in Africa who wanted us to build land-based power plants for them. And we told them, ‘Instead of building plants in these remote locations, let us build them on ships inside bunkers and sell them to you,’ ” she said. So even though the first Powership was destined for Africa, after the first Karpowership went to Basra in southern Iraq, it was followed by dispatches to Lebanon, and then Pakistan.

The 450-MW PPA with Ghana’s government in 2014 was a “breakthrough” that demonstrated the model’s robustness, as well as its powerful economic and societal impact for power-hungry developing countries, Harezi said. To date, Karpowership has completed 25 Powerships and deployed 21 of them, a total capacity that exceeds 4.1 GW. An additional 4.4 GW are either under construction or in the pipeline.

Among the deployed fleet are Powerships that supply between 10% and 80% of all generation on the Indonesian islands of Medan, North Sulawesi, East Nusa Teneggara, and Ambon, and 10% of Cuba. Since Ghana, notably, Karpowership has deployed eight Powerships to Africa. It also supplied electricity to Zambia, a landlocked country, which received 10% of its power from a Powership located in Nacala for two years via a tripartite agreement with Mozambique. Other countries include Sierra Leone, Guinea, Gambia, Senegal, Sudan, and Guinea Bissau (which has received 100% of its power from a 34-MW Powership since February 2019). Most have been delivered within 90 days following financial closure.

A Focus on Flexibility and Efficiency

However, the allure of a Powership is not rooted in the “fast-power, plug-and-play” aspect alone, as Harezi explained. Because Karpowership fully executes all aspects of a turnkey Powership project—starting from design to delivery, including construction, site preparation, commissioning, operation and maintenance, and even fuel supply, if requested—it has substantial control over efficiency optimization.

“Because of our compact design and seawater cooling [up to 10,000 cubic meters a day can be desalinated depending on the Powership model using evaporators], we’re even more efficient than land-based power plants that can be constructed with the same technology,” she said. And because the ships are at sea level and contracts are typically for baseload power, production suffers minimal derating.

But flexibility, too, can be key to “ensure the lowest cost of delivered power with no capital outlay,” she noted. That’s why all but the first generation of the company’s Powership fleet use dual-fuel engine technologies that can operate at efficiencies of up to 51% in combined cycle mode and consume a variety of fuels, including low-sulfur HFO, natural gas, or liquefied natural gas (LNG), she said.

The Osman Khan, the latest in the “Khan” class, for example, uses 24 18.32-MW Wärtsilä engines and 30 MW of steam turbines. Dual-fuel engines, which Karpowership also sources from MAN Diesel, offer specific advantages for floating Powerships over gas turbines because they are modular, and can provide ancillary, black start, durability, voltage and frequency control, and other benefits, she said.

Flexibility, and specifically fuel flexibility, is emerging as such an important priority for some regions that Karpowership has developed an offshore “gas-to-power” solution for its Powerships that pairs the engines with a floating storage and regasification unit (FSRU) to bridge power gaps. The company is currently working on converting two Powerships currently deployed in Mozambique and Senegal to LNG via its FSRU offering over the first half of 2021, Harezi said.

“Our aim is never to profit from the LNG molecules. We want to transfer the lowest cost of molecules to the customer” and give them more options, she said. Even in countries that do not have indigenous gas or large capacity requirements, “LNG can be the perfect solution,” she noted. “It is very compatible and complimentary to renewables, as well as baseload requirements.” 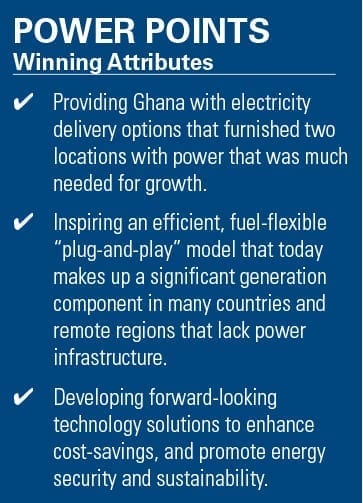 The Backbreaking Costs of ‘Dumsor’

Karpowership’s fuel flexibility was especially a key consideration for Ghana. However, ensuring the best use of the resource proved costly. After decades of reliance on the 1965-completed 912-MW Akosombo and the 1977-built 140-MW Kpong hydro plants, and owing to a reduction in gas flows from Nigeria due to unpaid debts, and transmission losses, the government had struggled to provide adequate power to its citizens. Locals even coined a term for the constant outages: “Dumsor.”

In 2015, Ghana moved to diversify its power portfolio. In an effort to attract independent power producers (IPPs), it entered into long-term PPAs for 2.3 GW with a “take-or-pay” clause—essentially obligating the Ghana National Petroleum Corp. (GNPC) to purchase 90% of a predetermined quantity of gas produced from the Sankofa offshore gas project, whether it was able to use it or not. By the end of 2018, the country expanded its power portfolio to 19 power plants, nearly half of which were developed by five IPPs. However, only 3.9 GW was “dependable.”

In mid-2019, finally, Ghana Gas, the entity responsible for operating the infrastructure required for the gathering, processing, transporting, and marketing of natural gas resources, completed the required 11-kilometer gas pipeline from a regulating and metering station in Takoradi to the Sekondi Naval Base, where the Osman Khan arrived from Tema and was connected to the grid via a new 330-kV transmission line in September 2019.

As the Energy Commission noted last year, while the Osman Khan’s power production with HFO at Tema was much needed, it was expensive to fuel it. In 2019, Karpowership used about 2.3 million barrels of HFO at an average delivery price of $65.40 per barrel, the Ministry of Energy noted. “With Karpowership taking approximately 50% of the volume of the take-or-pay Sankofa gas for power generation over the remaining period of the [PPA], Ghana will save a whopping monthly take-or-pay cost of US $40 million and projected annual savings of US $480 million,” the ministry said.

Still, Ghana remains bullish on gas. The growth of gas infrastructure, including successful projects over the past year, now leaves only one power plant—the 260-MW AKSA project—reliant on HFO. “The use of natural gas helps bring down the cost of electricity, saves our country, and makes it possible for us to look at a secure source of powering the transformation of our country’s economy and for the industrial development of Ghana,” noted President Nana Akufo-Addo in a statement earlier this year. “That is our main goal.” ■