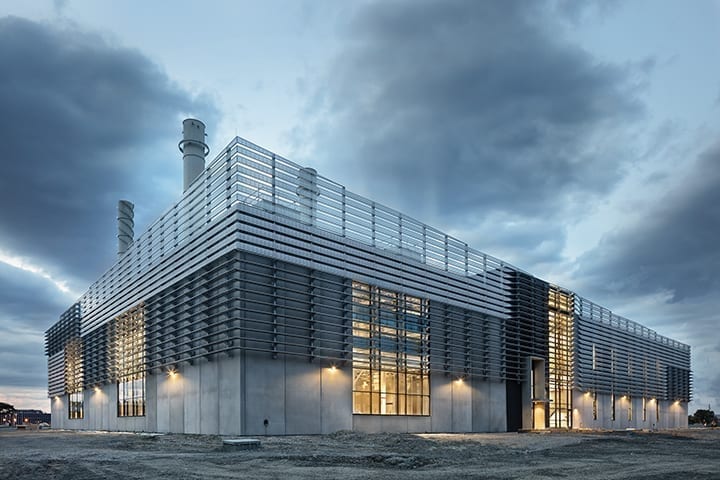 DTE’s new Central Energy Plant will energize a flexible and high-tech revamp of Ford Motor Co.’s Research and Engineering campus in Dearborn, Michigan. Because it goes beyond the envelope of modern distributed gas power by integrating heat and thermal energy storage to fulfill Ford’s sustainability objectives, the highly efficient project is a unique and worthy POWER Top Plant.

Ford Motor Co.’s engineering and manufacturing breakthroughs in the early 1900s revved up the automotive age, and over the past century, the Detroit, Michigan–based giant has continued to drive the mobility revolution through dedicated research and development. In 1946, nearly a half-century after Henry Ford instituted his renowned moving assembly line at the Highland Park Plant, his grandson Henry Ford II drew up a “master plan” for the Ford Research & Engineering Center (REC) in Dearborn, Michigan, to establish the company’s first campus dedicated solely to research and product development. While the campus was initially sited in close proximity to the company’s global headquarters offices on Michigan Ave. and the sprawling River Rouge Plant industrial complex, over the next 65 years, the Dearborn facilities continued to expand as the company and its product offerings grew.

In September 2017, with more than 11,000 increasingly specialized engineers and designers settled in dispersed workspaces throughout the city, Ford Motor Co. sought another major streamlining transformation to cater to dramatic changes in connectivity, automation, electrification, and other technologies that are reshaping its industry. In another master plan, it detailed a 10-year, $2 billion plan to revamp the Dearborn REC into a 900-acre “walkable” campus of interconnected buildings that could one day house more than 20,000 employees. The plan envisions a “flexible, high-tech environment showcasing new mobility solutions such as electrified bikes, scooters, and shuttles,” and later, even autonomous vehicles and other emerging transportation. As Ford President and CEO Jim Hackett explained at the time, the design serves as an “ecosystem” to inspire teams to “invent for the future,” and ready the company for a more sustainable, “human-centered” approach to creating new products and services.

At the heart of the new master plan is the DTE Dearborn Central Energy Plant (CEP), which began energizing the unique campus in January 2020. In keeping with the plan’s three core principles—integration, interaction, and co-location—CEP is a 34-MW gas-fired combined heat and power (CHP) plant that is co-located with a heating plant, as well as an efficient chilled water plant equipped with a thermal energy storage tank.

So, along with delivering 34 MW of power to DTE Electric’s regulated grid, the project can generate up to 225,000 pounds/hour of steam for campus space heating, as well as hot and chilled water for campus buildings, but it can also store chilled water to help minimize on-peak electrical demand, Richard Humphries, DTE Energy Manager of Business Development, explained to POWER in August. “The concept was to have a central utility plant that allowed [Ford] to lower their energy costs with decentralized facilities,” he said.

The end result is “a highly efficient and flexible central plant” that exceeds Ford’s range of high-performance sustainability objectives, he added. This included a 50% reduction in carbon footprint compared to an older steam powerhouse that the CEP replaced; a 50% reduction in water use; a 60% improvement in chilled water production efficiency compared to multiple existing in-building chillers; and a significant amount of space heating provided from recovered waste heat.

DTE, which joined the effort when it was selected following Ford’s May 2016 request for proposals, helped the company hash out a number of scenarios that would best fit Ford’s value proposition, said DTE Business Development Director Michael Larson. Eventually, in February 2017, Ford and the DTE entities settled on a design-build-own-operate-maintain (DBOOM) contract with DTE Energy Services, a complex mechanism that enabled the project’s collaborative delivery. It allowed Ford to assign expertise, ownership, and performance incentives to the party it deemed best-suited to address them to reap the best efficiency and sustainability benefits.

Meanwhile, it allowed DTE to integrate its specialized knowledge and efficiently streamline operability of the generation, grid, and thermal network to make the most of the front-of-the-meter case. Under the definitive agreements executed in October 2017, DTE Power & Industrial would build, operate, and maintain the integrated facility for 30 years; DTE Gas would fuel it; DTE Electric would own the CHP plant; and DTE’s Power & Industrial group would own the heating and chilling plant, while Ford would have the option to take over operations at the conclusion of the term.

Construction of the project required as much significant effort and coordination, noted Mary McVeigh, DTE Engineering Manager. Because the CEP was sited in the middle of the active REC campus (Figure 1), construction activities needed to be planned carefully to minimize disruptions. However, despite the broad technology solution that required careful integration, DTE completed the full project scope between May 2018 and December 2019—on schedule and on budget, she said. The integrated project includes:

Rentech Heat Recovery Steam Generators (HRSGs). The HRSGs, which are equipped with supplemental firing, are attached to each turbine but can be bypassed. When fully fired, the HRSGs can boost steam output from 70,000 pounds/hour in turbine exhaust gas mode to approximately 180,000 pounds/hour.

A 5-MW Siemens Steam Turbine. The steam turbine has “significant turndown capability to allow for utilization of excess steam,” said Humphries. The condenser cooling loop is also designed for 100F inlet cooling water, which in turn generates hot water for distribution to campus, he said.

The Chilled Water Plant. The central chilled water plant integrates four 3,200-ton duplex Trane chillers. Two additional chillers, nominally 1,200 ton and 1,800 ton, are heat pumps that can draw on energy and distribute hot water and chilled water through two different means. Humphries explained: “One, through exchanging Btus between the chilled water and hot water systems, which is referred to as ‘simultaneous heating/cooling mode,’ and the other is through integrating a potential future geothermal field.” The plant, notably, is also outfitted with steam-to-hot-water heat exchangers, as well as geothermal-ready piping connections for 3,000-ton vertical geothermal heat exchangers.

The plant is capable of distributing 38,500 gallons per minute (gpm) of chilled water at 42F at 70 psig and 19,500 gpm of 120F water at 85 psig to campus through supply and return pipes. Also notable is that the chillers use R-1233zd refrigerant, which is a fairly new technology to the U.S., noted Humphries. “It essentially has a global warming potential equivalent to carbon dioxide, versus some of the common refrigerants, which are on the 50 to 1,500 times scale,” he said, noting that aspect was one of many reasons the plant is seeking Leadership in Energy and Environmental Design (LEED) Gold certification.

The Thermal Storage Tank. The chilled water piping system is connected to a 5.3-million-gallon thermal energy storage tank, which supplies chilled water as needed to help the campus shave peak demand. The storage tank is designed to supply 5,000 tons of chilled water for 8 hours, between midmorning and early evening. 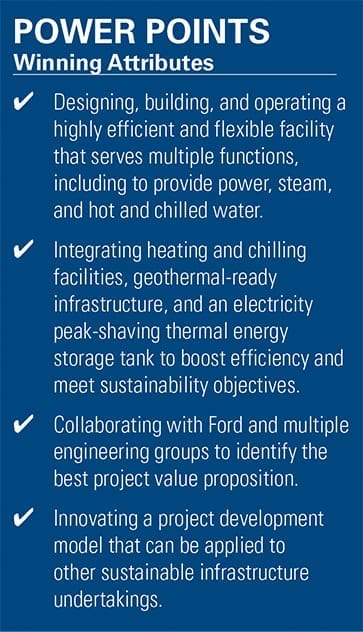 Asked how the plant has operated to date, Kevin Siess, DTE Energy plant manager, told POWER that despite the many novel component integrations, it is “extremely stable.” Though CEP experienced a handful of trips in the first week, it has continued to run 24 hours a day, monitored by an operating staff of only six people. The lean staff’s operations and maintenance efforts are boosted by digital twin technology in use at the plant that was developed and customized by Michigan startup Vital Tech Services, Siess noted. Paired with information from 3D modeling used to build the plant, virtual representations of the facility and its critical equipment have been crucial to providing monitoring and planning.

“We never stopped running throughout the pandemic, even when down to a skeleton crew, and we’re trading off two guys on [12-hour shifts] for seven days straight, and switching to a different pair of people to minimize contact and overlap,” he said. “It was a bit stressful, but the team did extremely well.” ■