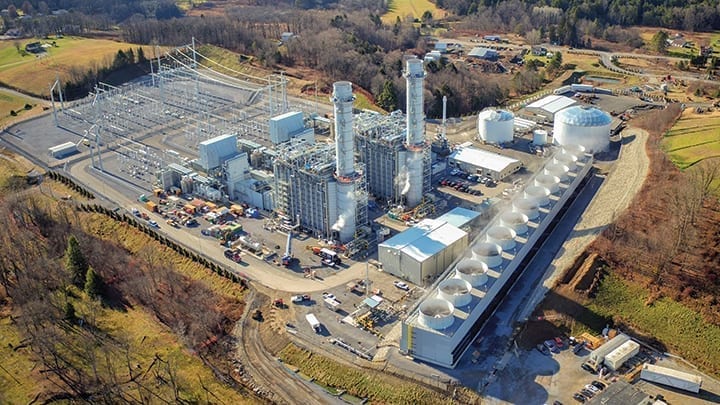 Competitive Power Ventures is known for building efficient and technologically advanced gas-fired facilities. The company’s Fairview Energy Center is its latest achievement, transforming a brownfield site into an economic engine.

Innovation is a cornerstone of today’s power generation sector, with new power plants using technologies that make today’s generation stations cleaner, more cost-effective, and certainly more efficient. Along with providing electricity to the communities they serve, these plants are economic engines, bringing jobs and serving as revenue streams, in addition to allowing cities and towns to repurpose industrial sites that otherwise could fall into decay.

Such is the case with Competitive Power Ventures’ (CPV’s) Fairview Energy Center in Jackson Township, in Cambria County, Pennsylvania. The 1,050-MW natural gas-fired facility sits on a remediated brownfield site, once home to a petroleum storage facility and salvage yard. CPV worked with the Pennsylvania Department of Environmental Protection (PADEP) and local officials to clean up the site, enabling the start of construction in August 2017 (Figure 1). The $1 billion plant came online in December 2019, months ahead of schedule, and today serves as a model for how an energy company and a power plant can help rebuild a region.

“We’re excited to bring a plant with this kind of economic development potential to this part of the country,” said Tom Favinger, a CPV vice president and CPV Fairview’s asset manager, when the plant came online late last year. That potential, which is already being realized, along with CPV Fairview’s many other attributes, make it more than worthy of a POWER Top Plant award.

Designed with Flexibility in Mind

The Fairview plant, at present the largest asset in CPV’s portfolio, features two GE 7HA.02 combustion gas turbines, two John Cockerill heat recovery steam generators, and one GE STF-D600 steam turbine in order to maximize efficiency. As part of the plant’s innovation, it is capable of blending natural gas and ethane, and combusting this blended fuel in the gas turbine.

“Dual ethane and natural gas capability allows for greater flexibility in the plant’s fuel mix, which results in enhanced plant economics,” Jeff Ahrens, CPV’s vice president of engineering and construction, told POWER. “If natural gas prices rise and ethane becomes more economical, we are able to shift the fuel mix to increase the percentage of ethane we use.”

Jennifer Villarreal, corporate communications director for CPV, told POWER that to the company’s knowledge CPV Fairview is the only GE-supplied facility with dual ethane and natural gas capability, and the only power plant of its scale globally to have ethane blending with natural gas. The plant utilizes ethane through GE’s Dry Low NO x (DLN) 2.6+ combustion system, which provides for enhanced plant economics.

In addition, according to GE Senior Product Manager John Basirico, the GE STF-D600 steam turbine at CPV Fairview makes it the first plant operating with GE’s new 50-inch last-stage blade (LSB), the world’s largest 3,600 rpm blade. GE’s 50-inch LSB completed extensive testing prior to operating at the CPV Fairview plant and is based on GE’s industry-leading family of LSBs. The combination of the combined high-pressure-intermediate-pressure section of the STF-D600, plus the 50-inch LSB low-pressure section provides exceptional power density for the CPV Fairview plant.

Ahrens said there are cost savings achieved from using an advanced combustion system. “By using best-in-class combined cycle technology, we are able to burn less fuel to produce the same amount of electricity when compared to older, less-efficient power generation, which results in cost savings as well as environmental benefits due to lower emissions,” he said.

Ahrens talked about challenges that had to be overcome during construction, many related to the project’s location. “The project schedule resulted in the underground work being performed during the first winter period and the manpower peak being reached during the second winter period, in addition to wet and windy conditions encountered during the summer months,” he said. “Kiewit optimized their execution plan, which required the project schedule to include a second shift for a portion of the work. This required the development and implementation of a noise mitigation plan in coordination with Jackson Township to allow a second shift and weekend work to occur without impacting the neighboring community. This provided opportunities for the project team to address weather impacts and reduce the schedule.”

Much of the equipment for the job site was delivered by rail. That created another challenge, as the closest immediately available rail siding was about six miles away.

“During construction coordination with the rail authorities, it was determined that one of the rail sidings identified during the development phase would not be available to use for unloading and transloading to specialized equipment for hauling to site,” Ahrens said. “An existing rail siding was provided as an alternative, however, the siding was abandoned and needed to be improved. Coming together, CPV and Kiewit worked closely with local agencies to develop and execute an aggressive detailed plan and schedule to permit, engineer, and construct/improve the rail siding to meet equipment deliveries and avoid delays.”

Ahrens told POWER that collaboration solved another problem. “While preparing to first fire the combustion turbines (CTs), the CTs were placed on turning gear for final check-out and it was discovered that the generator equipment phasing was installed opposite of the design drawings, and different than the transformer phasing,” he said. “Initial estimates developed indicated it would take two to three months to switch the generator phasing. However, Kiewit, CPV, and GE worked collaboratively and developed an alternate plan that involved modifying the iso-phase ductwork. Using this alternative plan, the field repairs were completed in under three weeks, resulting in minimal impact to the schedule.”

The dual-fuel configuration also meant potential problems and risk in that area had to be addressed. “Vaporizing liquid ethane fuel and blending with the normal pipeline natural gas for a combined cycle plant of this scale required early engagement of engineering and commissioning to identify key risks,” Ahrens said. “Early on, a plan was developed between CPV, Kiewit, and GE to reduce risk to the project performance and schedule.”

With the plant achieving commercial operation, Favinger noted a meaningful impact to the PJM power market from Fairview. “As a new plant goes online… it usually displaces the higher cost, older ones that usually have higher air emissions,” he said.

CPV Fairview already is providing the Jackson Township region with revenue. CPV will donate $500,000 annually to the community through the life of the plant, through a “host payment” agreement with the township. That amount could grow incrementally each year.

Township officials have touted the importance of that payment, noting that as of last year the township’s entire tax base from both residential and business taxpayers was just $151,000. Officials said the CPV payment will go into an account managed by the Community Foundation for the Alleghenies, and the township can spend the money on community benefits such as park upgrades or other amenities. It also could provide funds for much-needed road-paving projects.

CPV Fairview, which is operated by NAES Corp., was only in operation for a few months prior to the onset of lockdowns due to the COVID-19 pandemic. Favinger said CPV implemented pandemic plans across all the company’s owned assets, and detailed some of the new protocols specific to CPV Fairview’s operations:

■ The plant was locked down, and only pre-screened employees and contractors were allowed onsite.

■ CPV provided personal protective equipment (PPE) to each onsite worker, and after the initial wave of the virus, stockpiled supplies to prepare for a second wave.

■ Plant operators were separated and conducted all business from individual workstations.