When a nuclear power plant experiences ground motion due to an earthquake, an evaluation may be needed before allowing the plant to continue operating or to resume operating if it has been shut down, as was the case after the seismic event that shut down both units at Dominion’s North Anna Power Station on August 23, 2011. (See p. 34 for a complete analysis of the event and successful recovery program.) The Electric Power Research Institute (EPRI) had previously conducted research to develop guidance regarding the types of evaluations and inspections that would be necessary to ensure that an earthquake had not caused damage that could affect safe operation of a plant. More recently, EPRI has formulated guidance relating to the types of instrumentation necessary to determine the extent of the ground motion at a plant site.

For every nuclear plant, an operating basis earthquake (OBE) has been established. The OBE has been defined such that if it can be determined that the ground motion experienced at the plant site did not exceed the design basis, the plant can continue to operate (or can return to operation if it has been shut down). If the ground motion exceeds the OBE, or if it cannot reliably be established whether the OBE has been exceeded, the plant may need to shut down and remain shut down until it can demonstrate that the earthquake caused no damage that could affect safe operation.

Although the OBE is often characterized in terms of a single parameter, peak ground acceleration, it is actually defined by a response spectrum. A response spectrum relates the maximum acceleration or velocity experienced at a particular location to the frequency associated with the vibrations caused by the earthquake. The response spectrum is typically presented in the form shown in Figure 1. 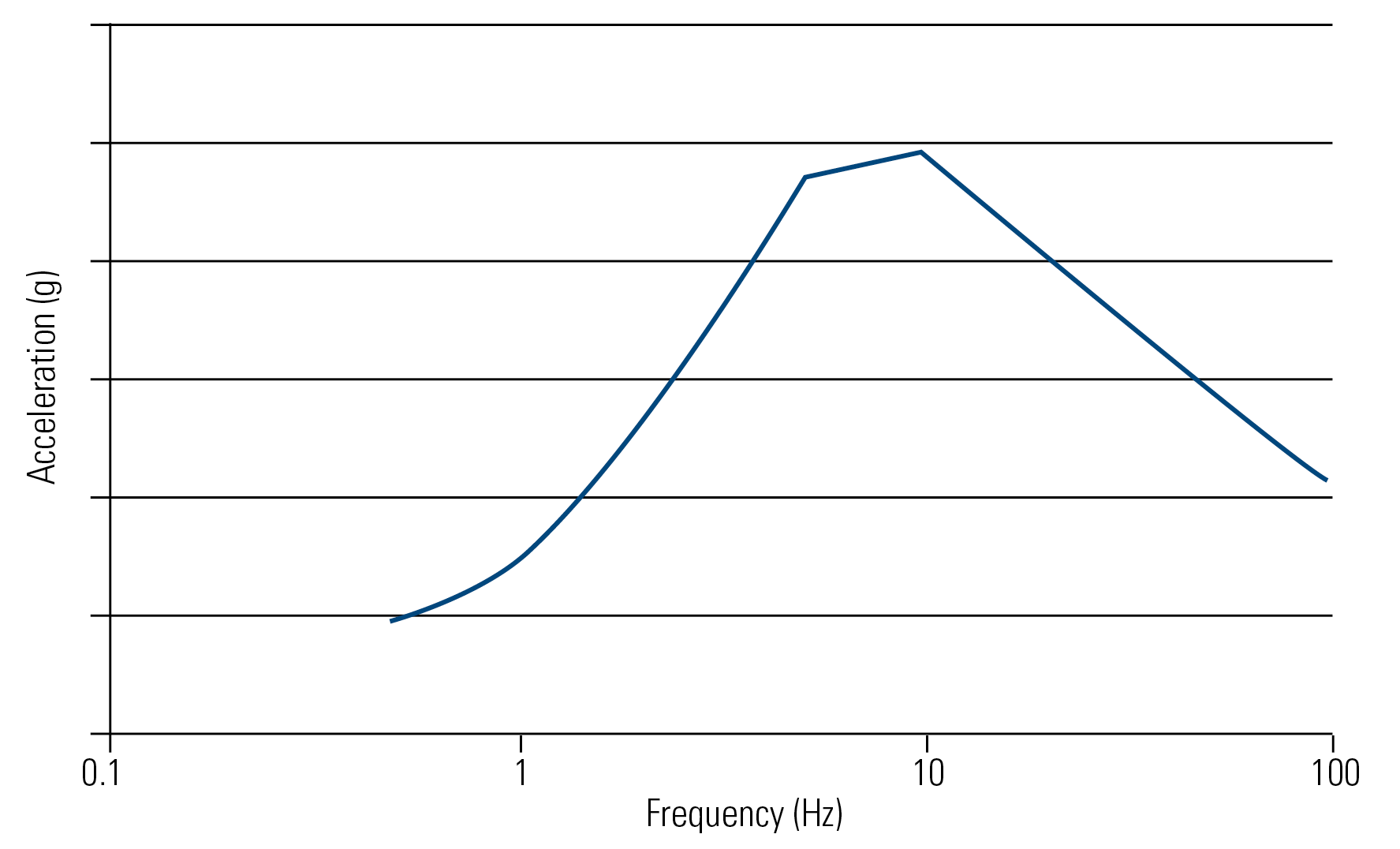 Application of the Nuclear Regulatory Commission’s (NRC’s) approved OBE exceedance criterion requires not only measurement of the OBE parameters (that is, the response spectrum and cumulative absolute velocity, CAV), but also walkdown inspections of the plant. CAV indicates the potential for a recorded earthquake to cause damage to nuclear plant structures. It is the absolute area under the acceleration vs. time plot as recorded by a time-history digital recorder.

If the OBE criterion is not exceeded and the inspections yield no evidence of significant damage, the plant can remain in operation or be restarted. Valid instrument data, available within 4 hours after an earthquake, are necessary to support such a determination. Thus, it is very important that nuclear power plants install and maintain appropriate seismic instrumentation that can facilitate prompt evaluations of earthquake data.

Requirements and Options for Instrumentation Systems

In addition to being placed in the locations at which the OBE is defined, these instruments would need to meet minimum qualifications:

Basic Automatic System. Improved functionality can be achieved by automating certain steps that must be performed manually using the minimum seismic instrumentation system. The basic automatic system would add a dedicated online computer to automatically retrieve data from the accelerographs and perform the calculations related to possible exceedance of the OBE. Such a capability would expedite the process of assembling the information needed to make a decision with regard to whether a plant shutdown is required.

To upgrade from the minimum system to the basic automatic system, a dedicated cable would be needed from each instrument to the recording location (typically, the main control room) to capture the acceleration time history. The analysis results should be displayed to the control room operators in a form that is easy to understand. An uninterruptable power source for the computer that records and analyzes the data would also be needed to ensure that the results could be available within the 4-hour timeframe.

Complete System. The complete system is the most advanced of the three. Such a system would incorporate an online computer for data acquisition and analysis along with more extensive instrumentation. The system could be configured so that it complies with NRC Regulatory Guide 1.12. Although the minimum and basic automatic systems could facilitate short-term response, the complete system would facilitate the collection of more extensive response data from within plant structures, enabling more comprehensive long-term evaluations of the earthquake’s damage potential.

A complete system would incorporate additional accelerograph locations, rather than accounting only for the free field and the location at which the OBE is defined. Data collected from other response locations within the containment and auxiliary buildings would provide more definitive information regarding the impact of the earthquake. The system would be fully battery-backed.

The costs to implement a seismic instrumentation system will vary from plant to plant, depending on many factors: what options are desired for the instrument, where the sensors might need to be located, and whether the instrumentation will augment or replace an existing instrument system. EPRI estimates the cost of the minimum system in the range of $120,000 to $180,000, the basic automatic system at $150,000 to $270,000, and the complete system at $225,000 to $300,000, although specific site locations could add additional cost.

A seismic instrumentation installation or upgrade at a nuclear power plant is subject to certain licensing considerations. It should be noted first that voluntary implementation of the earthquake-response guidelines provided in the four EPRI references listed in the sidebar, including installing new seismic instrumentation, does not generally require prior NRC approval.

This is a synopsis of an EPRI white paper originally published in January 2012 and available at no charge from http://www.epri.com. Search for document 1024889.