Generally, plant operators believe that rebuilding a feedwater heater takes longer than installing a new replacement. Even if rebuilding were an option, they think that it can’t be done while the unit remains in operation. But today, feedwater heaters can be rebuilt in a matter of weeks — while the plant continues to operate — keeping plant downtime to a minimum.

For generating stations that need a new feedwater heater immediately, the option of on-site rebuilding may make good economic sense, because new replacement units can take a year or two to manufacture. Rebuilding can also mean avoiding long periods of derated operation and perhaps a forced outage or two.

Rebuilding heaters can save in the range of 25% to 50% of the cost of a new replacement unit, making the rebuilding option tough to ignore. "It required four weeks to completely rebuild two heaters, and by rebuilding over buying new feedwater heaters, we saved about one-third the cost," says Nick Samford, the engineering supervisor at NRG’s Limestone Generating Station, located in central Texas.

"For about half of the heaters we rebuild, we isolate the heater and re-tube it on-site while the unit is online, by isolating the defective heater," says David Grimes, an engineer at American Power Services (APS), a provider of heat transfer equipment services that include troubleshooting, repairing, and complete rebuilding projects. "Bypass lines can be installed so that the rebuilding can proceed without the plant having to wait for an outage. This, by itself, saves money."

Contrary to the opinion held by some heater manufacturers that on-site rebuilding isn’t practical, it’s a complete replacement that often proves impossible.

"When you buy a new heater from a manufacturer, it will typically come already assembled and ready to be installed," continues Grimes. "But we’ve seen cases where there was not sufficient room to physically get a new heater into position. As a plant expands over the years around the original installation, extra equipment gets installed, and, before you know it, the heater that was once in the wide open is now behind three walls. In contrast to installing a replacement heater, a rebuilding project can still take place within those same space constraints."

Any doubts that rebuilt units can’t match the thermal efficiency of new replacement units are quickly dispelled when you realize that the original tube material can be upgraded during a rebuild to actually improve the thermal performance of the original design.

Additionally, a rebuild or retubing can extend the life of an existing heater by 20 to 30 years — just as long as a total replacement, but at far less capital expense. Additionally, many components that once were considered obsolete and/or not reusable — such as the tubesheet, channel, and shell — can be returned to as-new condition.

The rebuilding process begins with testing and a troubleshooting analysis of the heater. Sophisticated equipment determines the exact location, nature, and severity of a problem via eddy current, ultrasonic, dye penetrate, magnetic particle, hydrostatic, and boroscopic testing procedures.

With testing data in hand, a rebuilding company can make recommendations on cost-effective options for remedial correction, retubing to original specification, or rebuilding to improve performance.

Specialized tools have done much to speed up the process. Hydraulic tube pullers, power tube strippers, tube joint milling tools, and plasma arc inner-diameter tube-cutting facilitate the rebuilding process. Additionally, new technology allows for defective or leaking tubes to be explosively plugged with the unit online by utilizing a robotic arm to install the required tube plugs. Doing so provides a safer method of installing tube plugs that keeps personnel out of harm’s way.

Founded in 1989, NRG Energy Inc. is a wholesale power generation company, primarily engaged in the ownership and operation of power generation facilities and the sale of energy, capacity, and related products in the U.S. and internationally. The company’s global portfolio of projects totals more than 24,000 MW.

NRG’s Limestone station, located between Houston and Dallas, is a coal-fired plant with two units: 836 MW and 864 MW. Both of the original equipment manufacturer’s heaters had been in service for more than 20 years. However, the desuperheater was a little too large, resulting in saturated water exiting at excessive velocities that caused tube erosion.

"We initially considered buying completely new heaters, but ultimately decided not to because of the additional cost," Samford explained.

APS began the repair process with a failure analysis that identified vibration in the desuperheating zone as a cause of tube failures (Figure 1). APS then redesigned the desuperheater to eliminate the wet wall condition of the tubes and to reduce the velocity of the steam entering the desuperheater while maintaining the original design thermal and operational parameters. 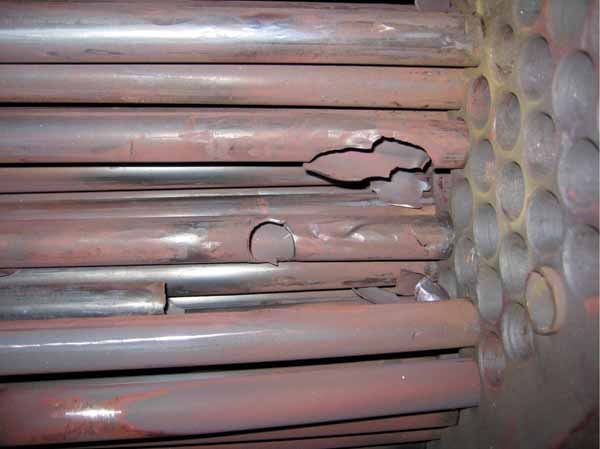 1.    Just worn out. Damage to the desuperheater tubes due to steam impingement in this feedwater heater caused a reduction in plant efficiency. Courtesy: American Power Services

Work began in late February 2009. The internal structure was rebuilt while changing the steam inlet location. Additionally, the desuperheater flow path was rerouted during the rebuilding process. 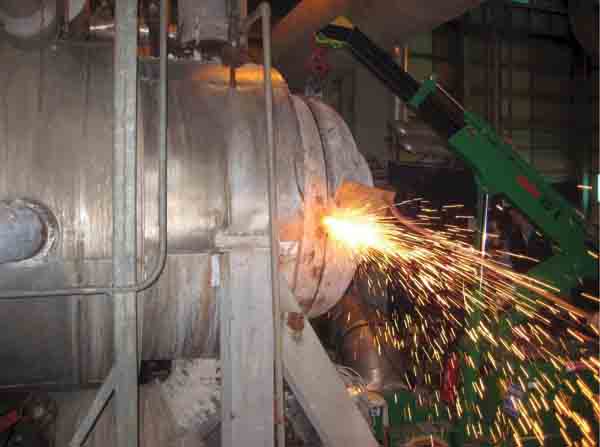 2.    Cutting-edge repair. In order to speed up the rebuilding process, a specialized motor-driven plasma cutter was used to remove the hemispherical head to give better access to the tube sheet. Courtesy: American Power Services 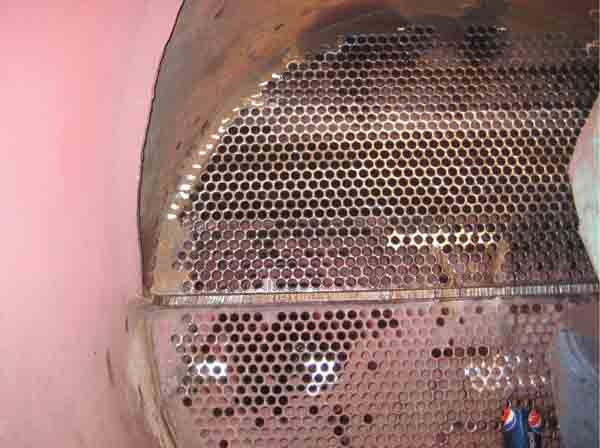 The rebuilt feedwater heaters allowed the Limestone plant to run at design superheat conditions, thereby eliminating the wet wall condition (Figure 4). As a result, either of the two units can be taken off-line and the plant can still generate 100% power output. Since the condensing zone steam velocity was increased, thermal efficiency improved slightly. The job was finished within 25 days. 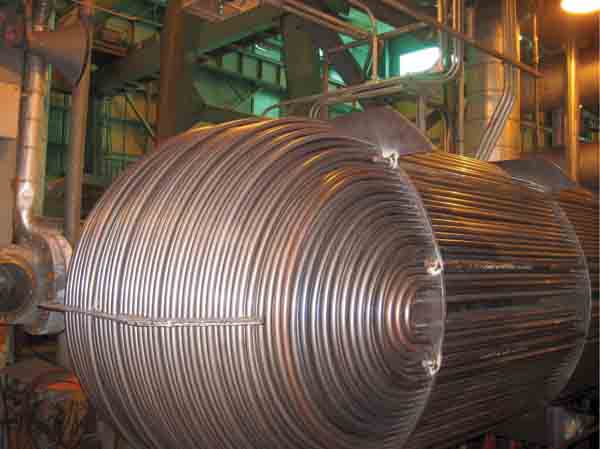 "By rebuilding over buying a new unit, we saved our company money," says Samford.