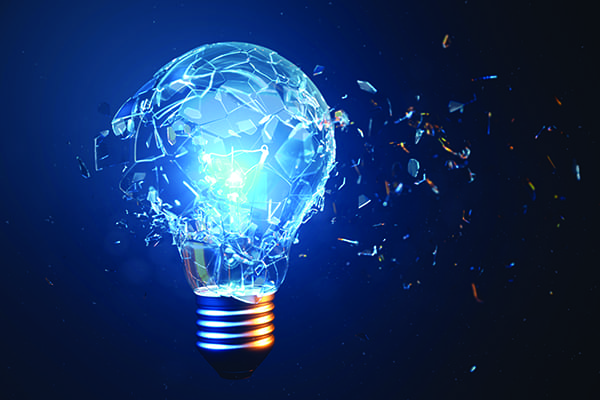 The power industry is experiencing significant changes. Natural gas, wind, solar, and battery storage seem to be the wave of the future. What’s compelling the transformation? Some people point to environmental concerns, including climate change, but decreasing costs are also a prime driver.

It’s been a rough stretch for many coal and nuclear power generators over the past few years. If you’re a regular POWER reader, you’ve seen the news, as countless coal and more than a few nuclear power plants have closed. Most of the casualties have struggled economically in an age of plentiful and relatively inexpensive natural gas, which has resulted from advancements in hydraulic fracture and horizontal drilling techniques. Decreasing costs for wind and solar resources have also applied pressure to the bottom line, forcing many companies to evaluate whether coal and nuclear facilities that have long supplied reliable baseload generation are worth keeping in the mix. Will those trends continue? All signs point to yes, but perhaps not at the same rapid pace for all technologies.

Britt Burt, vice president of power industry research with Industrial Info Resources (IIR), agreed that the growth in gas-fired generating capacity (Figure 1) is slowing. “This year, we’ll see natural gas capacity increase by about 6%, probably increase by another 2% in 2020,” he told POWER during an interview in November.

As gas power additions decelerate, wind power could ramp up in the coming year. “Wind—we’re seeing it increase by about 6% this year, and probably 14% next year, as far as installed capacity,” Burt said.

The American Wind Energy Association (AWEA) reported in its U.S. Wind Industry Third Quarter 2019 Market Report that nearly 2 GW of new wind power was added to the U.S. grid between July 1 and Sept. 30—the strongest third quarter in history. Furthermore, it said strong wind power deployment is expected to continue. The near-term wind project pipeline grew to a record at the end of September, AWEA said, reaching 46.5 GW—equal to almost half of today’s operational wind turbines. The group reported 22,651 MW under construction and an additional 23,844 MW in advanced development, including 5,792 MW of offshore wind.

The Offshore Wind Handbook—an 86-page document published jointly by K&L Gates LLP and SNC-Lavalin’s Atkins business—echoes the optimism Kiernan has for the offshore wind energy industry. “[W]e now see a project development landscape of favorable policy and regulatory programs, advantageous pricing for proven reliable technology and construction services, and a pool of specialized expertise necessary for successful project development,” David P. Hattery, partner with K&L Gates, and Úna Brosnan, business and strategy development manager with Atkins, wrote in their introduction to the handbook. “All of these factors lead to the aggressive pricing we are now seeing in the power markets, with a likelihood of further cost compression to come. The time is now and the opportunity is before us,” they said.

Among the significant benefits offshore sites offer wind developers are an abundance of space; higher and less turbulent wind resources than on land, resulting in higher capacity factors; and the availability of larger turbines. In the early days of offshore wind development, the cost was high (typically $215/MWh), the handbook says, but in recent years offshore wind costs have tumbled. In 2019, the UK contract of difference auction saw strike prices as low as $50.12/MWh.

In Deloitte’s “2020 Renewable Energy Industry Outlook,” it says U.S.-European partnerships could be crucial in taking offshore wind development to the next level. “U.S. and European entities are forming joint ventures (JVs) that combine complementary knowledge and skillsets. While U.S. firms typically bring domestic credentials, such as their deep knowledge of local markets and regulatory systems, their European partners often bring a wealth of experience and expertise in offshore wind technology. Three of the four bidders on New York state’s first offshore wind project were JVs between U.S. and European entities,” the outlook says.

And the possibilities are amazing. According to National Renewable Energy Laboratory estimates, U.S. offshore wind has a technical resource potential of more than 2,000 GW of capacity, or 7,200 TWh of annual generation. For context, that’s nearly double the nation’s current electricity use. While enthusiasm for offshore wind should be tempered by the fact that only 30 MW of offshore capacity is currently in operation in the U.S.—that being the Block Island wind farm (Figure 2), a 2017 POWER Top Plant—there have been positive developments on the policy front and at least one large project is gaining momentum.

The Connecticut Department of Energy and Environmental Protection announced on Dec. 5 that a bid from developer Vineyard Wind had been selected to advance to contract negotiations with the state’s electric distribution companies to provide 804 MW of offshore wind through the development of the Park City wind project. In a press release, DEEP said the Park City project was offered at a price lower than any other publicly announced offshore wind project in North America.

Unsubsidized Costs for Renewables Are Competitive

According to the Deloitte report, the levelized cost of offshore wind declined by 24% during the first half of 2019, and onshore wind dropped 10% during the period. In November, Lazard’s Levelized Cost of Energy Analysis—Version 13.0 was published. The financial advisory and asset management firm reported, “[T]he cost of renewable energy continues to decline, certain technologies (e.g., onshore wind and utility-scale solar), which became cost-competitive with conventional generation several years ago on a new-build basis, continue to maintain competitiveness with the marginal cost of existing conventional generation technologies.”

Lazard’s analysis was essentially echoed by Morgan Stanley Research in a report it issued on Dec. 5. “From an LCOE perspective, in certain markets wind costs can be as low as $20–30/MWh and solar costs as low as $30–40/MWh (both including battery storage), competitive with most coal plants in the U.S. While the lack of storage options is sometimes viewed as an inhibitor of renewable growth, this likely is not an issue until the later part of the 2020s, and some corporates expect storage to see a similar cost curve as wind/solar, with costs declining [about] 5–10% annually,” it says.

Nonetheless, Deloitte noted that the end of the wind production tax credit (PTC), which expires at the end of 2019, could slow development of new projects despite cost decreases. “[A]s the federal PTC for wind steps down in 2020 while solar still enjoys the ITC [investment tax credit] benefit, solar could become increasingly cost-competitive with wind. As a result, in 2020 and beyond, some wind-only customers will likely diversify and build a mixed portfolio of wind, solar, and storage to fulfill commitments,” Deloitte’s outlook says.

Solar power already seems to have the upper hand when it comes to new additions worldwide. Fitch Solutions Macro Research (a unit of Fitch Group) released a report on Dec. 3, which showed total installed solar capacity overtaking total installed wind capacity by 2021. Its view was informed by an upbeat outlook for China, which the firm expects to add 300 GW of solar capacity over the timeframe, and the firm was also optimistic about the prospects for solar in the U.S. and India.

“The three markets [China, the U.S., and India] will comprise nearly 70% of global net solar capacity growth over our 10-year forecast period. We also note that solar power is suitable at sizes ranging from small rooftop solar installations to large-scale solar farms, and relatively easy projects to implement in a timely manner, supporting a broad base of growth for the technology,” the Fitch Solutions report says.

The firm also pointed to the more favorable phase-out schedule for the solar ITC compared to wind power’s PTC as a basis for its prediction. Furthermore, Fitch said solar power plants often have more consistent generation profiles than wind power plants, as solar irradiation is more predictable, and it peaks during the day when many companies have their highest electricity demand. “In combination with the cost competitiveness, these factors will lead companies to procure solar power projects through either power purchase agreements or on-site generation, thus supporting our forecast of higher growth in the solar power sector than the wind power sector,” the report says.

Still, tax policy may have a similar effect on solar development as it does on wind. Currently, the solar ITC is set to ratchet down from 30% in 2019 to 26% in 2020, 22% in 2021, and 10% in 2022 and beyond for commercial projects. The credit does the same for residential projects with the exception being it expires completely in 2022. The solar industry, however, is lobbying strongly in Congress to extend the credit.

Yet, even as solar and wind display incredible promise, energy storage could be the power subsector most poised for growth. According to a survey conducted by Merrill Corp., a software-as-a-service technology provider for participants in the merger and acquisition lifecycle, 37.6% of respondents ranked energy storage as their most-likely alternative energy investment in 2020, beating solar—the second-highest alternative at 23.6%—and wind (10.1%) by wide margins.

The Brattle Group—a firm that analyzes complex economic, finance, and regulatory questions for corporations, law firms, and governments around the world—released a study in December that suggests solar-plus-storage deployments (Figure 3) will increase dramatically in the next couple of years. The researchers found “solar-plus-storage already accounts for over 40% of all capacity in the California ISO interconnection queue, and is experiencing sizeable growth in the PJM queue as well.”

Brattle said favorable economics and policies are driving the trend toward co-locating energy storage with solar PV. It pointed to three power purchase agreements recently approved by the Public Utilities Commission of Nevada as evidence for the encouraging outlook. One of the Nevada projects, a 380-MW/1,416-MWh system, will reportedly be the world’s largest battery installation when it enters service.

“According to our forecasts, by 2030 the battery market will be worth $116 billion annually, and this doesn’t include investment in the supply chain,” James Frith, BNEF’s senior energy storage analyst and author of the report, said in a statement.

However, there is much less certainty on how the industry will reduce prices from $100/kWh down to $61/kWh by 2030. BNEF believes energy density at the cell and pack level will play a growing role, as it allows for more-efficient use of materials and manufacturing capacity. It said new technologies like silicon or lithium anodes, solid state cells, and new cathode materials will be key to helping cost reductions play out.

“The most interesting piece I think we’ll see with lithium-ion [batteries] coming forward in the next year to two years is how they are used,” Mashek said. “Does the utility follow the, I’ll call it, ‘rules’ of a warranty or do they use them as they need them? And, how does that really affect the replacement and duty life of the batteries?”

Mashek noted that the CEO of a large U.S. utility said the company was installing batteries but was unconcerned about warranties, suggesting the utility would use the batteries as needed regardless of whether the battery manufacturer approved of the practice. Mashek said that could reduce battery life by 50% to 66%, adding significantly to the true cost of installations.

The Future Revolves Around Technology

New and evolving technology (see sidebar) could help fit all the power pieces together. In a paper released by Burns and McDonnell’s renewable energy team leading up to a large power event in November, the writers said, “Now, as public policy shifts toward development of renewable energy as a strategy to address concerns over climate change, hydropower is being targeted as an excellent source to assume a larger share of the generating portfolio. Digital control technology is a key element of upgrading and expanding hydro capacity.”