The future of high-level nuclear waste disposal at Yucca Mountain remains uncertain as a new U.S. administration considers its nuclear agenda. The European Union’s policies remain just as unsettled. With new projects under construction in several countries and a nuclear ban in effect in others, no unified long-term storage approach is in sight.

It sometimes seems like a too-long football game. On one side is "Brussels," code word throughout Europe for the European Union’s drive toward continent-wide standards and practices. On the other side are jealously protected national, regional, and local interests. The struggle between the two forces is felt in areas as diverse as labor standards, food products, building practices… and radioactive waste management.

In 1957 the EURATOM Treaty did not extend to waste management. The result is that Europe has multiple national radioactive waste management standards and practices, and progress toward satisfactory continent-wide solutions can be best described as "patchy." Brussels issued a draft Directive in 2004, attempting to improve the situation, but it remains a draft.

The fact is that each country with a nuclear power program has sought ways to dispose of waste in a way that meets its own realities. Those realities include a wide range of factors not unlike those faced by the Yucca Mountain repository in the U.S.

Start with geology. Each country has naturally considered the types of soil and rock available within its borders.

For a while a consensus was forming that nuclear fuel storage in crystalline rock structures, such as granite, was the way to go. The properties of granite made it attractive — it forms a strong barrier and tunnels are stable. Later investigation and analysis indicated that the strength of granite was perhaps a handicap, as any cracks in the rock tend to stay open, so that even deep underground there is risk of relatively fast groundwater transport of released radionuclides. The lack of any alternatives in Scandinavia means that crystalline storage is the selected approach there.

Choices of host rock for deep repositories have widened in recent years, and clay rocks are now being investigated seriously both in France and Switzerland. Although clay is held to be an option in Germany, the main focus there is on salt, with its good thermal and self-sealing properties. Until recently in the UK, attention was focused on crystalline host rock (specifically, the conditions at Sellafield on the Cumbrian coast, site of Calder Hall, the world’s first commercial nuclear power station), but the challenge of ensuring public acceptance is now forcing consideration of other alternatives.

Although there are question marks surrounding the disposal of high-level radioactive waste, low- and intermediate-level waste issues are typically solved or much closer to solution. Sweden and Finland have crystalline rock cavern repositories in operation at depths of around 50 meters (about 150 feet). Hungary (Figure 1) is about to proceed with constructing a similar repository, but deeper, at around 270 meters (about 900 feet) (see "Nuclear waste disposal in Hungary"). There are also near-surface vault-type repositories operating in the UK, France, Spain, and other countries (Figure 2). 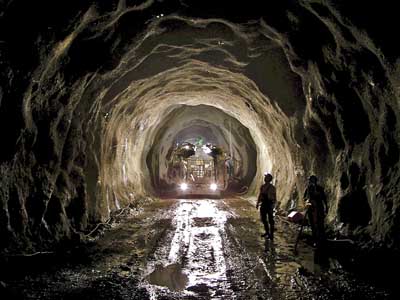 1. Bury it deep. The Bataapati site in southwest Hungary is designed for the disposal of low- to intermediate-level nuclear waste. Courtesy: Golder Associates 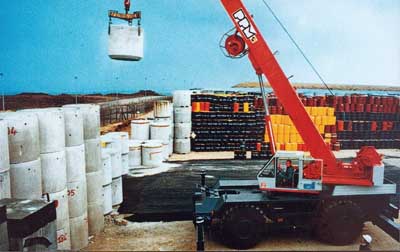 2. Packaged waste. Low- and intermediate-level radioactive waste at the La Manche site in Normandy, France is stored in sealed drums. The site will eventually be covered with concrete. Courtesy: Commissariat a L’Energie Atomique

Looking for a safe place to store low- and intermediate-level waste from the Paks Nuclear Power Plant, the Hungarian Public Agency for Radioactive Waste Management began a geological exploration program to analyze the safety of a proposed underground storage site.

It is important that the radioactive waste be isolated from the biosphere, so one of the main considerations is finding a location where the geology does not include pathways that would offer a fast route to the surface for contaminated groundwater.

Two extensive geological exploration programs were carried out at the proposed site, near the village of Bátaapáti, in southwest Hungary. They included boreholes, trenches, and surface and borehole geophysical and hydrogeological measurements. After geological suitability of the strongly compartmented crystalline rock was demonstrated, the investigations continued. Subsequent work included tunneling down to reach the zone anticipated to contain the repository. Tests and observations made during the tunneling provided more detail about the geological conditions and about the responses of the rock to underground construction. Implementation of the repository is now in progress, and underground disposal is scheduled to start at the beginning of 2011.

For the final disposal of spent fuel there have been several stages of field investigation in a claystone formation at a site near Buda, also in southwest Hungary, and a preliminary safety analysis has been made for a deep repository there. This project is currently on hold; there is a dry interim storage site for spent fuel at the Paks power plant site.

Although the geological realities differ throughout Europe, some of the political and economic realities seem to be figuratively set in stone.

Much of the public attitude toward nuclear power is rooted in history. In the UK, for example, nuclear power was originally associated with military matters and atomic weapons, and as a consequence it was managed in a manner that one might call "economical with the truth" (see sidebar "Making Decommissioned Nuclear Sites Safe in the UK"). This secrecy bred a public climate of distrust, which has not been helped by some high-profile nuclear accidents, including the Windscale reactor fire and the 2005 leak of radioactive waste inside the THORP reprocessing plant (Figure 3). 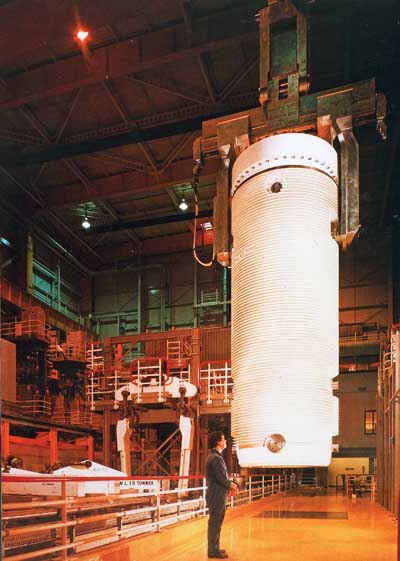 In contrast, in Finland, there is generally a high level of trust in the engineering profession, and this halo effect carries over to the disposal of radioactive waste. Furthermore, the Finnish industry’s safety record helps it avoid public opposition to its disposal choices.

One of the common threads throughout Europe is the recognized importance of the stakeholder engagement process. This recognition is relatively recent in the UK, where lack of public acceptance of a waste management program in 1998 resulted in the program coming to a sudden halt.

Following a similar experience in Switzerland, of having to abandon a project as a result of public opposition, the rules were changed so as to reduce the weight of local votes in issues of national significance. A potential waste storage site in Wellenberg in the central Swiss canton of Nidwald was rejected by a local referendum even though prior characterization work indicated it would be suitable.

There is also a relatively high degree of consensus on site characterization methods and approaches. It is generally agreed that sufficient information is necessary to enable the safety of the site to be demonstrated by performance analysis, to show that construction and operation are practical and affordable, and that the candidate site is well understood for the purposes of ensuring stakeholder confidence. Such information is often assembled in site descriptive models describing geology, hydrogeology and other factors.

Surface characterization programs usually involve substantial amounts of geophysics, although this is always supplemented with borehole analysis. In Europe’s saturated rocks, characterization of the hydraulic properties is always important, especially for crystalline sites in which fractures play a role in groundwater transport.

Economics also play a role in European radioactive waste management practice, sometimes in the form of commercial interests. One ongoing issue of this kind can be found in Germany, where nuclear electricity generators are obliged to pay for investigating and developing repository space for waste. As a result, generators are not interested in the proposed stakeholder engagement process, with its requirement to investigate multiple candidate sites. They maintain that work should continue on demonstrating that the salt dome at Gorleben in Lower Saxony, in northeast Germany, is suitable for their high-level waste and spent fuel.

Even in Finland, which is considered to have the most advanced program for high-level waste, a dispute with commercial implications has developed recently. Tunneling into the crystalline rock at the already accepted and permitted repository site is well under way. The organization working on the Olkiluotu repository, Posiva, is owned by the two companies that currently operate nuclear power plants. This repository has a defined capacity, at least for the purposes of permitting, and it is still not clear whether a new entrant into the nuclear power generation market would also be able to deposit waste there.

Despite the areas of difficulty, progress will have to be made. Existing waste isn’t the only concern. If those European countries that are trying to gain public acceptance for new nuclear power plants hope to build new plants, they will need to solve the waste storage problem.

Although North American and other global companies can compete for work in developing nuclear repository capacity in Europe, they may find the going tough. To have the track record to supply niche expertise in the investigation and planning stages, they would need reference projects back home. They would also face competition in the construction and operational phases, as much of the work involves underground mining technology, and there are many European companies with international reputations in this field.

—Martin Goldsworthy (mgoldsworthy@golder.com) is a principal of Golder Associates and is based in the firm’s Celle, Germany, office.