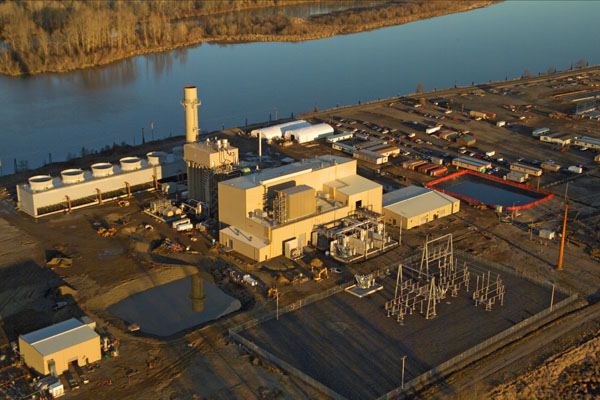 Portland General Electric (PGE), which supplies power to 800,000 customers in northwestern Oregon, is in many ways facing challenges common to utilities nationwide: Regulatory pressures, renewable portfolio standards (RPS), and low gas prices are forcing a switch toward gas and renewables and away from coal. But factors unique to the Pacific Northwest are combining to create a number of interesting twists not seen elsewhere.

PGE, the state’s largest utility, owns or co-owns 2,781 MW of net generating capacity. Of this, about 900 MW are wind or hydro, with the remainder mostly gas-fired. PGE also co-owns the last remaining coal-fired facility in Oregon, the 585-MW Boardman Coal Plant.

“This is a challenging and exciting time for the utility business in general and PGE in particular,” Maria Pope, PGE’s senior vice president of power supply and operations, and resource strategy told GAS POWER in April.

Oregon’s RPS currently requires PGE to deliver 5% of its electricity from renewable sources, as of 2011. The standard increases to 15% in 2015, 20% in 2020, and 25% in 2025. Significantly, only a portion of PGE’s nearly 500 MW of hydro capacity is eligible to help meet the standard. PGE is allowed to count up to 50 MW of certified low-impact hydro, as well as incremental improvements in hydro capacity resulting from improved efficiency and any new hydroelectric power resources. Currently, this means that only about 29% of the output of PGE-owned hydro facilities qualifies for inclusion in the RPS.

PGE is meeting the current 5% standard and actively planning to exceed the upcoming 15% requirement in 2015. Last fall, it put out a request for proposals (RFP) for up to 100 MW of new renewable capacity. The RFP drew more than 4,400 MW of total bids. From this, PGE finalized a short list of projects for negotiations in mid-March, with decisions expected mid-year and the resources expected to come online by 2017.

The rapid increase in wind generation in the Pacific Northwest is creating challenges for utilities in dealing with rapidly cycling output. PGE, with its 450-MW wind farm in Bigelow Canyon, is drawing a substantial portion of its electricity from wind. Previously, its hydropower generation would have provided an ideal balancing resource, but PGE’s generation mix is evolving there as well.

When PGE secured new licenses for its hydroelectric resources on the Deschutes, Willamette, and Clackamas rivers over the past decade, Pope explained, the Federal Energy Regulatory Commission required extensive investments to restore migratory fish runs or improve fish passage and survival as well as water quality. One of the projects was restoring historic salmon and steelhead trout runs that were cut off from the upper Deschutes Basin in the 1960s. The Deschutes project (Figure 1) was the first to be completed, with the first fish completing the round trip from the upper Deschutes to the ocean and back in 2012. On the Willamette and the Clackamas rivers, an ambitious series of fish passage improvements has also been undertaken, along with a range of habitat improvement projects. 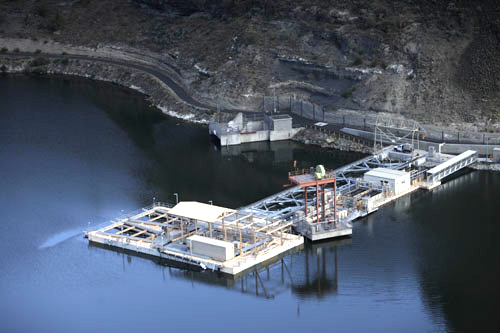 1. Under its renewed license for generation at the Round Butte Dam on the Deschutes River in Oregon, PGE has installed this underwater fish collection and transfer facility to restore trout and salmon runs upstream. Courtesy: PGE

But these gains have come at a cost, as the fish passage and aquatic habitat requirements in the new licenses have reduced the flexibility of PGE’s hydro operations. The dams are restricted in the amount of water they can take into their turbines and the rate of change they can make in the flows below the dams, all in the interest of maintaining flows closer to what naturally occurred before the facilities were constructed. While PGE can still balance its load across multi-dam projects, this has meant a reduced ability to respond to changes in demand.

In part to deal with these challenges, PGE is planning to expand its 410-MW Port Westward combined cycle plant in Clatskanie, which came online in 2007 (Figure 2), with the addition of a 220-MW gas engine–powered peaking plant planned for completion in 2015. 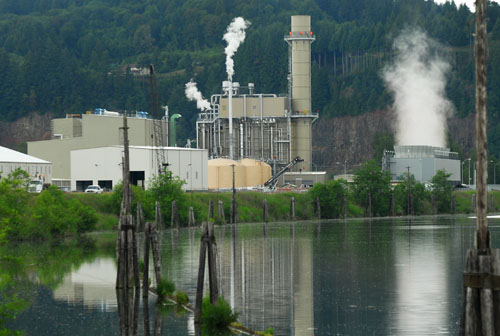 The $300 million project will be supplied by Finnish firm Wärtsilä and will employ 12 of the company’s new 50SG gas engines. The fast-ramping plant is specifically designed to respond to rapid grid fluctuations as a result of renewable generation.

Wärtsilä has built a number of similar plants in the U.S. recently, among them the LCEC Generation Plant in Lovington, N.M., that was honored as a POWER Top Plant last fall. That plant also was built to work cooperatively with nearby wind generation.

“The goal is to maintain and enhance reliability while making investments strategically to keep costs affordable for our customers,” Pope said.

End of the Line for Coal … Or Not

Last year, PGE agreed to stop burning coal at Boardman by 2020 in the face of a potential $470 million bill for pollution controls that would have been necessary to operate it out to its original 2040 retirement date (Figure 3). 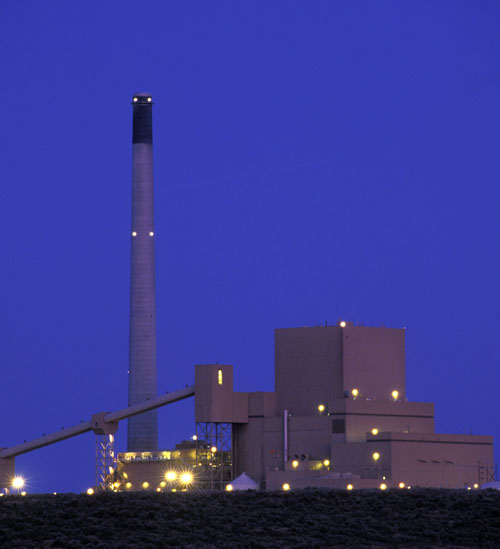 Various ideas have been bounced around for replacing Boardman’s capacity, among these, converting it to burning biomass. The biomass plan would employ giant cane (arundo donax), which grows rapidly and can be processed to create a coal-like fuel. PGE has been working with researchers to study whether giant cane could serve as a replacement without requiring expensive modifications to the plant. This has raised some concerns among local authorities, because giant cane is also a fast-growing invasive weed that has caused problems in other states, such as California. The worry is that the plant could escape from the PGE’s contract farms and establish itself in the local ecosystem.

At present, Pope said, PGE’s research is focused on preparations for a test burn on 100% biomass, currently scheduled for 2014. It expects to begin construction later this year on a temporary torrefier near the plant, which will be used to drive moisture out of the biomass and convert it into a charred fuel that can be pulverized and combusted much like coal. If the test burn is successful and research into potential sources of biomass confirms sufficient fuel can be procured on a reliable and economic basis, PGE expects to evaluate a biomass conversion against other available resource options in its integrated resource planning process before the Oregon Public Utility Commission sometime after 2014.

The conversion of the Boardman plant and closure of other coal facilities in the Northwest is creating a vacuum in coal demand—one regional coal companies are seeking to fill with exports, using much of the same infrastructure that once moved coal to the area’s power plants. Though half a dozen or more export projects are being discussed, the leading candidate, being spearheaded by Australian company Ambre Energy, would move as much as 9 million tons of coal per year through the port facility in Boardman. Ambre co-owns several mines in Montana and Wyoming, and is hoping to ship the coal to markets in Asia.

The proposal has—not surprisingly—drawn fierce opposition, and Ambre’s permit application with the state has been delayed twice, most recently on March 14. Ambre has since asserted that the state Department of Environmental Quality is unfairly delaying the application process.

More delays may be on the way, however. On April 1, the Sierra Club and several other environmental groups announced plans to sue BNSF Railway and six coal companies for pollution resulting from coal trains moving through the region.

In the meantime, PGE is already preparing for a portfolio free of coal. The same RFP that produced the Port Westward project also sought to procure 300 MW to 500 MW of baseload capacity, though PGE’s internal bid into the process was not selected. PGE is currently negotiating with the top bidder, which has not been named. Among the bidders was New York–based private equity firm Development Partners Group, which is seeking to build a combined cycle plant (that would sell power to PGE) in Troutdale, west of Portland. PGE is also still negotiating for additional summer and winter peaking resources.

Whatever the outcome at Boardman, the gas-renewable partnership is settling in for the long haul in the Northwest.