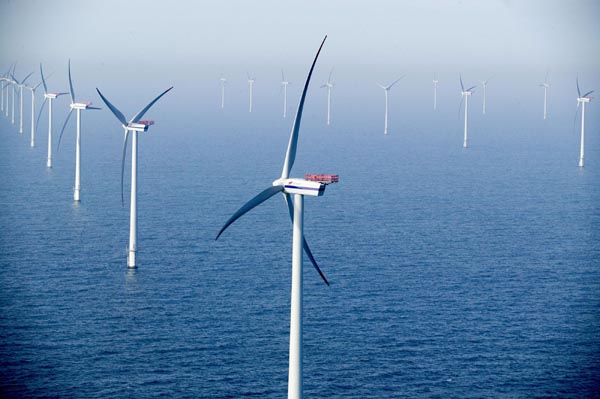 The usefulness of gas-fired power in backing up intermittent generation from wind is well-established, but a new study suggests wind generation can also serve an important price-hedging role as gas takes more of the generation pie from coal and nuclear.

The study, released in March by the Lawrence Berkeley National Laboratory in California, begins by pointing out one key advantage wind generation has over gas: With the fuel—wind—being free, long-term costs are far more predictable, meaning long-term power purchase agreements (PPAs) are good deals for both wind farm owners and utilities.

The same, obviously, is not true for gas. While work is being done to find ways to make longer-term gas purchase agreements feasible, short-term agreements and spot purchases remain the rule for gas generation, a situation that is likely to persist for the foreseeable future. That leaves generators at the mercy of future spikes in gas prices.

This is a point, the author notes, that is being lost in current euphoria over low gas prices:

[A]t a delivered gas price of $4/MMBtu, fuel costs account for roughly 85% of the total operating cost—of around $30/MWh—of an efficient combined-cycle gas turbine. While some wind power projects in the U.S. that are sited in excellent wind resource areas are already selling power to utilities at prices in the neighborhood of $30/MWh (a “post-incentive” price that reflects federal and state government incentives received), in general, $30/MWh is difficult for any type of non-gas generator to compete with.

But even in this environment, the study argues, gas still needs wind.

The study analyzed pricing data from 287 wind PPAs covering about 23.5 GW out of the 58.8 GW of wind capacity built since 1997 (only about 35.4 GW of this might be covered by PPAs; the remainder consists mostly of merchant and utility-owned generation). Of this set, most represented 20-year contracts, and three-quarters of the capacity was covered by a PPA 20 years or longer. All of the PPAs studied bundled energy, capacity, and renewable energy credits (REC) into the deal. Most (59%) were fixed-price agreements; the remainder allowed some escalation to keep pace with inflation.

Over the median 20-year duration period, the study found that in real 2012 dollars, the average price under the agreements declined slightly from just over $50/MWh to just under it. “In other words,” the author notes, “buyers of the wind power in the LBNL sample can rest assured that, on average and in real dollar terms, wind power will cost them no more (and even slightly less) in 2031 than it does today.”

But while wind generation at $50/MWh hour may have a tough time competing with today’s $30/MWh gas power, that disadvantage starts to fade when moving beyond the five-to-ten-year range afforded by conventional gas price hedging mechanisms.

Not only is the current forward curve of the gas futures market trending upward through 2025, making it impossible to lock in current gas prices, the volume of trades and open interest more than a year in the future are quite small. This makes it very difficult to secure meaningful quantities of gas over the long term.

While fixed-price supply contracts are available to some extent, the prices typically do not diverge significantly from the futures market. Further, terms exceeding five years are quite rare and are typically frowned upon by utility regulators under the belief that the costs of hedging outweigh the benefits in the low-price, low-volatility environment.

This, the author says, despite the fact that pricing risk is currently almost entirely on the upside—gas prices are highly unlikely to sink any further than the current $3 range.

“In light of this current situation, viewing wind power as a long-term fuel price hedge would seem to be as appropriate now as it has ever been, despite prevailing low gas prices. In fact, it may be even more appropriate now, given the almost one-sided nature of the gas bet.”

But can wind offer a cost-effective, long-term alternative price hedge?

To answer this question, the study makes some assumptions to simplify the comparison into one of actual wind PPA costs and gas fuel prices. First, wind is treated only as a generation resource rather than a capacity resource, so that each MWh of wind replaces a MWh of gas-fired power. Second, the value of RECs are not considered so that the comparison is strictly on the cost of generation. Finally, gas O&M costs and transmission and integration costs are also not considered.

With that in mind, EIA projections for gas prices out to 2035 were compiled into a range against which the average wind PPA prices from the data set could be compared. Using the full data set, the study found that wind PPA prices would remain above gas prices until the mid-2020s or early 2030s, depending on which EIA projection is used. They would, however, be well within the full range of the compiled gas price projections from about 2020 forward, suggesting wind indeed offers a hedge against higher-price projections.

“Hence, if minimizing exposure to these potentially significant long-term gas price increases is desirable, then [the comparison] suggests that wind power could be an effective tool to help achieve that goal.”

The results are more compelling when considering PPAs signed in the past few years, when wind prices have fallen substantially (~$40/MWh in the data set). Here, wind gains hedging value as early as 2015.

The main complicating factor, as might be expected, is the federal Production Tax Credit (PTC). The loss of the PTC, which could cause wind prices to rise as much as $28/MWh, pushes long-term hedging value back out to the late 2020s.

The author notes that several entities—Public Service Company of Colorado and Google—recently signed long-term PPAs for wind specifically to hedge against future price increases. The analysis suggests this is a tool worth considering for utilities with significant amounts of gas-fired power.