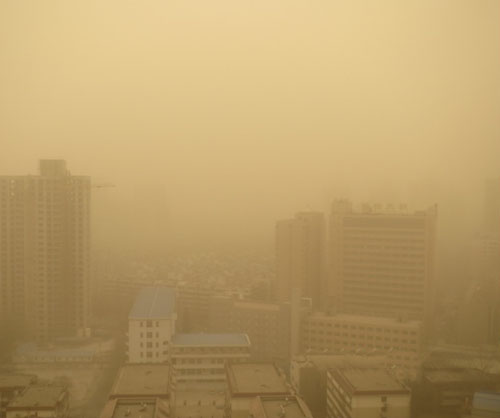 This photo of a city in China, taken on March 9, 2013, is untouched. The name of the city is irrelevant, but for purposes of discussion, it’s located in northwest China, near Pakistan.

My words cannot add or detract from those that accompanied the photo, which came from a resident of the city, a person born in China and a member of the Communist party.

“It’s said by the news that in many cities of China, the air has been severely polluted these days, my city included of course. My respiratory system is so sensitive that I almost can’t bear it. A sudden dust storm attacked today. Can’t go anywhere!”

On a recent trip I took to Beijing, the sky was a murky yellow; there was a constant burning odor in the air that left an unpleasant aftertaste. My clothes felt gummy by the third day.

The cause is simple; the ramifications may be irreversible; the fix is an understatement of epic proportions. Years of unregulated development and dependence on coal for electricity generation and industrialization have turned China’s unabated growth into a global environmental crisis. Many have criticized the U.S. for not ratifying the Kyoto Protocol. However, developing countries, including China and India, were exempted from targets because they were not main contributors during the period of industrialization that is believed to be the cause of climate change.

The message is clear, the concern is obvious, but the effort is weak. Forget talking “Green”; green is only a wavelength. Renewables will help. Natural gas is a tangible option. Energy efficiency and practices, something as simple as turning off the lights, can collectively make a significant impact. Gains are being made in developed countries.

By all estimates, China’s natural gas potential is huge. The country is purported to have 1,275 Tcf of technically recoverable shale gas reserves, 50% more than that of the U.S. (which has around 875 Tcf). Shale gas has been a game changer for the U.S. economy—an abundant domestic fossil fuel that is cheaper and cleaner than coal and petroleum. With lower carbon, nitrogen, sulfur, particulates, and mercury emissions, a shift away from coal helps to reduce greenhouse gas emissions and smog.

However, China’s prospects for a shale gas bonanza may be in trouble. Exploration of its reserves has not proved out. The most obvious reason for the poor results can be attributed to the geology, which makes the gas more difficult to recover than shale reserves in the U.S. This is followed by the lack of technical know-how by Chinese companies to effectively drill horizontally and fracture the shale layer under pressure.

One would expect that the extensive knowledge base in the U.S. would make China’s learning curve shorter and more productive. But no matter how much technology can be thrown at China’s adverse geology, politics between the two countries and the sensitivity of U.S. companies toward sharing their intellectual property with China’s national oil companies (NOC) may be greater stumbling blocks to China’s expectations for a shale gas gold rush.

At a meeting in Beijing several months ago, an official from a NOC mentioned they are drilling and hydraulic fracturing with tools and equipment manufactured in China. He reported that performance from domestic, rather than U.S., equipment is about 30% less effective. Furthermore, he indicated that, for whatever reason, U.S. drilling and fracturing experts are not present at the well site during operations. Anyone knowledgeable in technology transfer knows that these two factors are a prescription for failure.

Then how can one tame a raging elephant? Training possibly, but how slowly will its effects be seen? One idea might be an export tax on goods based on the annual change in greenhouse gas emissions for the exporting country. This would penalize nations that continue to pollute, making their goods more expensive and less competitive on the international market. Those countries that sustain or make reductions in their emissions would be rewarded by more competitive products. This would shift the production of goods from polluting countries to those that steward environmental improvements.

Of course, such an altruistic solution is but a dream. What’s not a dream are the growth prospects of the gas mask industry. Amazon sells an Israeli Civilian Gas Mask with NBC NATO Filter and Drinking Hydration Tube, Model 4A1, for $23.90. What a deal! Have to go and order a few before the price rises beyond the cost to fill up my car.

—Dr. Barry Stevens is a regular contributor to GAS POWER and the founder of TBD America Inc., a global technology business development group. An earlier version of this article was originally published on his blog.