In theory, carbon taxes work by raising prices: Higher prices on fossil fuels should induce conservation, stimulate development of more-efficient technologies, reduce emissions, and make alternative forms of energy more economically attractive. Most industry analysts accept this economic theory, but some differ in how to implement the tax.

For example, in his Commentary in this magazine’s July 2008 issue, Jim Rogers, CEO of Duke Energy, said an economy-wide carbon tax with a declining national carbon emissions cap is more to his liking than L-W. On that point we agree. However, most utilities, especially those with large coal-fired generation resources, seem to favor a cap-and-trade approach. Congress seems to agree with the latter group, but for a different reason: The T-word is anathema to politicians preoccupied with burnishing their “I feel your pain” credentials before the November elections.

I think it’s important to carefully examine the B.C. legislation for one good reason: It’s likely to be adopted as a carbon control cause celebre as L-W is retooled and other revenue-raising options are considered by the next Congress.

What’s unique about this legislation is that B.C. politicians unabashedly call it a tax—but one that is “revenue neutral,” where all the tax proceeds are returned through reductions in personal and business taxes. “Revenue recycling” is the latest euphemism coined by the B.C. government to describe the new tax.

There are fundamentally two approaches to formulating a carbon tax revenue stream: Base the tax on the amounts of carbon-based fuels sold or on the carbon emissions that enter the atmosphere from defined point sources. In general, the leading carbon tax proposals in the U.S. are based on tailpipe or stack emissions but are calculated indirectly on the number of kilowatt-hours sold by power plants, as Rogers recommends.

The B.C. approach is to tax all fossil fuels (19 in total), including transportation and power generation fuels, and even home heating oil. Another key difference: Tax revenues will not be used to fund new, low-carbon projects or research into advance energy or carbon sequestration systems, as has been proposed in all of the U.S. legislative proposals.

The B.C. tax rate begins at $10 per metric ton of CO2 equivalent and will incrementally increase to $30 in five years, although the tax is really just another excise tax taken at the pump. (Currency is Canadian dollars throughout this article; the U.S. dollar is only 2% lower in value at this writing, in early July.) By using its excise taxing authority, and by juggling the tax rates, the B.C. government flies under the national government radar as the Parliament in Ottawa ponders national carbon reduction strategies. A similar game is being played out in the U.S., with California fighting the U.S. Environmental Protection Agency over authority to regulate CO2 tailpipe emissions.

Put in more practical terms, the carbon tax adds about nine cents to a gallon of gasoline today and will add a bit more than 27 cents per gallon by 2012. The average price of gas in B.C. was about $5.30 per gallon in early July; about 25% of that was government taxes. The new tax adds about $60 a year in additional fuel costs for a car driven 10,000 miles a year and about $46 per year to the average home’s heating-fuel costs.

The B.C. government expects to collect $1.8 billion over the next three years from the carbon tax but plans to return the same amount to individuals and businesses in the form of lower tax rates, a climate action dividend, or low-income climate action credits.

The climate action dividend was a one-time $100 check mailed at the end of June to ensure that everyone received their check just before the carbon tax took effect. These checks were also called “Campbell Checks,” after B.C. Premier Gordon Campbell, leader of the province’s Liberal Party. The pretax rebate cost the B.C. treasury about $440 million and was paid out of the year’s budget surplus.

The carbon tax also adds $20.38 per metric ton of coal used for power generation—a surcharge that increases to $61.14 by 2012. A step increase of this magnitude in the price of coal would have a pronounced effect on U.S. electricity rates, but the impact to customers of BC Hydro will be close to negligible.

The U.S. Energy Information Administration coal market report for the first week in July reported that the average price of Powder River Basin (PRB) coal was $14 per short ton or about $15.40 per metric ton. The B.C. carbon tax, if implemented in the U.S., would immediately more than double the price of PRB coal today and would quintuple it by 2012.

It’s easy being green when all your power is generated by hydroelectric plants (Figure 1). Government-owned BC Hydro, with 95% of the province’s customers, has some of the lowest residential rates in North America—only 7.0 cents/kWh after pending rate increases. But more important is the fact that hydropower accounts for 80% of BC Hydro’s installed generation capacity. Only 7.5% of its installed capacity is fired by natural gas used to supplement the hydroelectric system when water flows are low or when gas-fired generation is needed for system stability. 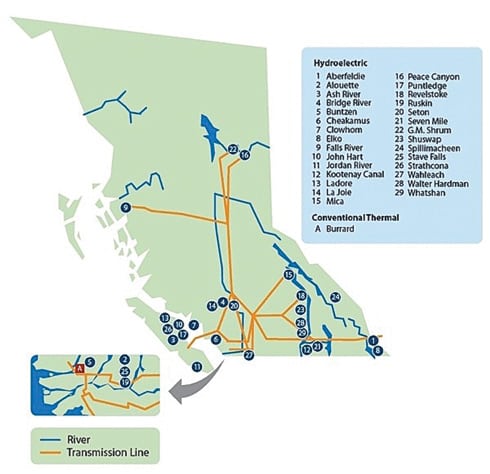 1. All hydro, all the time. The G.M. Shrum and Peace Canyon generating stations on the Peace River produce 29% of B.C. Hydro’s electricity requirements. In the Columbia River Basin, Mica and Revelstoke hydroelectric plants together contribute 25%, while Kootenay Canal and Seven Mile generating stations supply another 10% of British Columbia’s electricity needs. Courtesy: BC Hydro

An Angus Reid Strategies poll for The Vancouver Sun taken days after the new carbon tax went into effect found the public evenly divided on Campbell’s initiative, even if individual citizens were cost-neutral.

Perhaps more interesting is the public’s interest in the proposal of opposition New Democratic Party of Canada (NDP) leader Carole James to tax those that pollute at the source instead of taxing consumers. The NDP’s “axe the gas tax” campaign began two weeks before the tax took effect. An NDP poll found that 82% of those surveyed believed the government should “target major industrial producers” rather than imposing retail taxes. The remaining 18% expressed support for Campbell’s carbon tax. How this plays out for the Liberal party in the May 2009 elections will be interesting to watch. 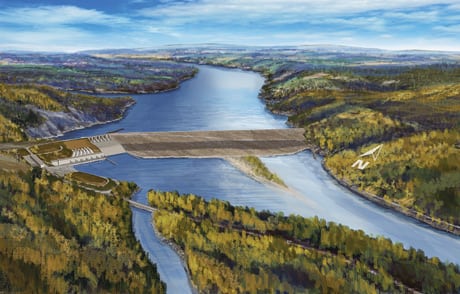 2. Planning ahead. An artist’s concept of a potential new hydro project called Site C, one of several options under consideration by BC Hydro to meet the province’s growing electricity demand. The project would be located about 4 miles southwest of Fort St. John on the Peace River and produce about 900 MW. The cost of the project is between $5 and $6 billion. Courtesy: BC Hydro

B.C.’s Campbell government describes the carbon tax as “by far the most aggressive carbon pricing regime in North America. In fact, it’s one of the more aggressive regimes in the world.”

Critics are very vocal in their opposition to the tax—they either think it went too far or not far enough.

The major criticism of the carbon tax was predictable, because it’s a new tax that was enacted without much public comment and pushed through unilaterally by the majority party. Political debate was also quashed on the new tax by the majority.

Opponents such as the conservative-leaning Canadian Federation of Independent Business and the Frasier Institute are also asking why the tax is disguised as a green policy. Meanwhile, others, such as the Canadian Centre for Policy Alternatives, are chastising the government for not taking the $440 million rebated and directly investing it into new technologies that would pay greater carbon reduction returns. The 2008 B.C. budget was $37.7 billion, so the rebates—though small for individuals—amounted to a substantial sum for the government.

Ian Bruce from the David Suzuki Foundation thinks the policy didn’t go far enough and believes that B.C. should extend the plan well beyond four years, as the province’s carbon tax rate will still be lower than the $69/metric ton of CO2 in Sweden that has yet to foster a “clean energy revolution.” Another critic reminded us in an op-ed piece for the left-leaning Canadian Dimension magazine that the price of gasoline is inelastic and that price increases alone will not change consumer driving habits.

None of these criticisms answers the more fundamental question: Why this carbon tax scheme now?

Read between the lines

The only reasonable explanation is found by reading official government statements and editorials written during the run-up to the July 1 start of the carbon tax. Jeffrey Simpson wrote in Toronto’s Globe and Mail that he viewed the carbon tax as a “watershed moment: The great taboo of a carbon tax has vanished. No longer can anyone argue in Canada that such a tax cannot be implemented or sold, and that any government suggesting one would be committing political suicide.”

Simpson, speaking for the environmental left, went on to say that “the tax will stop rising after four years and we will again have to pressure government to raise it further. Still the hardest work is over and the groundwork is now in place for future action.” Former B.C. Finance Minister Carole Taylor noted in her February unveiling of next year’s budget that “it will rest with the government of the day to decide if the tax rate should change any further. This is an important turning point for British Columbia and we think for Canada,” she added, likening the climate-change budget measures to a “social movement.”

It’s not about revenue recycling. It’s about psychologically anesthetizing the public to a routine increase in the cost of removing CO2 from our planet by way of annual tax and cost-of-living increases.

In about four or five years, expect the personal and business tax reductions to be eliminated under the guise of needing the carbon tax revenue to fund expensive carbon reduction projects. Maybe the carbon tax will even be merged into the existing federal Goods and Services Tax. It’s all about staying just under the public’s pain threshold for new taxes. The best analogy that comes to mind is the frog in the pot (an urban legend, by the way—see www.fastcompany.com/magazine/01/frog.html). Just raise the water temperature so slowly that the frog croaks before realizing it’s in boiling water. Revenue recycling is how the B.C. government will heat the water.

Here’s the crux of the problem with Campbell’s plan to reduce B.C.’s CO2 emissions by 33% or 40 million tonnes by 2020 and the key reason why it won’t work in the U.S.: The most optimistic estimates of achievable CO2 reduction under this tax scheme are about three million tonnes, or about 7.5% of the total at a price of more than $15 billion in increased fuel taxes. What are the remaining 92.5% of the cuts going to cost?