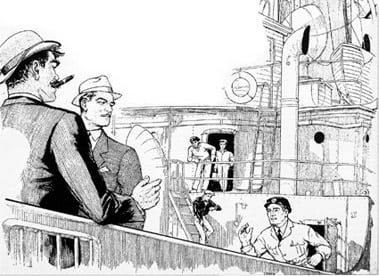 Watching the submarine Nautilus come up the Hudson River from my 26th-floor window put a few mental gears into motion. For one thing, I was suddenly back at sea again. And that brought into focus that old seadog, Marmaduke Surfaceblow.

I’ve seen a lot of expert seamanship aboard both merchant and navy ships while sailing around the world. But navigating under the polar icecap called for something extra. "Boy," I said to myself, "I’ll bet Marmy can’t sound off on some experience to top that polar stunt." Still, I was sure he’d come up with something.

An hour later, I was walking along the bustling West Side waterfront, heading for the Bent Propeller Bar—a hangout for mariners, waterfront characters, and local plant engineers. Stepping inside, I could see Marmy’s battered gray bowler above the crowd at the busy bar. Edging nearer, I ordered a short beer and then calmly sized up the situation before opening my mouth.

The foxy old consultant was preoccupied as usual, staring at a bottle of Sandpaper Gin before him. Paying no attention to the weather-beaten characters about him, he appeared to be wrestling with some big problem, like trying to harness the sun’s energy.

"That Nautilus sailing under the polar icecap took some real seamanship, eh Mr. Surfaceblow?" I ventured meekly, wondering if I should start shoving off. Initially, I got no response. But then Marmy grabbed his bottle, worked up a vacuum of 16 inches on his cargo pump, and ballasted his holds in one operation.

Slamming down his bottle, he roared in his foghorn voice: "BILGEWATER on submarines. I’ll tell you armchair engineers how I kept an ocean liner from popping her rivets and my only help was from her bartender."

That did it. A sea of bronzed faces turned toward our hero. Here was a pronouncement that must be listened to, one spoken by the voice of authority. Marmy turned toward his expectant audience, gave his bowler a starboard list, backed against the bar, and then blasted away.

"Back in 1933, I landed in Genoa, Italy, aboard the steam yacht SS Petras. She was owned by a sharp New York playboy who never paid his bills. He was so deep in debt that the local gendarmes slapped a lien against the Petras as soon as we tied up.

"After we’d been on the beach for two weeks, the American consul had us placed aboard the liner SS Rex as second-class passengers. She was sailing on her maiden voyage to New York. The Rex was the pride and joy of Mussolini and all Fascist Italy. Her 51,000 gross tons made her the largest ship ever built in Italy. Her departure date was proclaimed a national holiday and she sailed with a full list of passengers.

"Her skipper was out to cop the title for the fastest Atlantic crossing from Gibraltar to New York. But two days out to sea we hit heavy weather and the Rex began rolling like a drunken sailor. Then the proud maiden popped a dozen rivets in her hull plates amidships, about 10 ft below her waterline.

"The exposed rivet holes were in the boiler room. Some passengers got panicky, but the captain assured everyone there wasn’t any danger because the holes would be plugged. 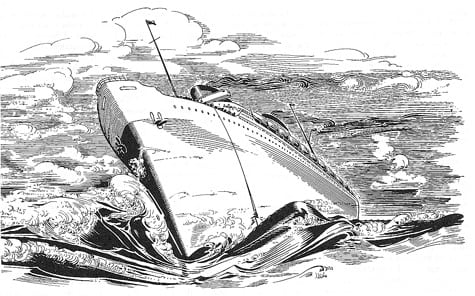 "The SS Rex pitched and rolled as a sailor was put over the side to plug a dozen rivet holes," bellowed Marmaduke.

"I was interested in knowing exactly how the Rex’s chief engineer would do the job. I soon learned he’d had hardwood tapered plugs driven into the holes. But the strain on the plates that had popped the rivets in the first place loosened the wooden plugs in a hurry, and other rivets in the area were starting to loosen.

"Next morning, word got around that the chief had asked the captain to put a sailor over the side in a bosun’s chair. This seaman was to push a bolt through each hole from the outside while the engineers in the fireroom slipped a gasket, washer, and bolt over the threads and tightened each bolt.

"That scuttlebutt was right because next morning there was plenty of excitement aboard. Up on deck the mate was having a bosun’s chair rigged. It had a line running down under the keel and up the port side to keep the sailor from smacking against the hull each time the Rex rolled. And she was rolling plenty.

"As passengers swarmed all over the deck to watch, several seamen stepped forward and volunteered to do the job. With the ocean kicking up her heels, it took a brave man to go over the side, no mistake about it. When the first seaman was lashed into the bosun’s chair, the captain changed the ship’s course to put him on the lee side.

"But still the Rex rolled, bringing the rivet holes out of the water one minute, and then plunging them 20 ft under the next minute. The sailor rolled under the waves as he tried bravely to insert the bolt before getting waterlogged himself.

"By the time the first bolt was inserted he was half-drowned. Talk about keel-hauling practiced in sailing-ship days, this was the nearest thing to it that I’ve seen. It took a sailor with guts, and that sailor was a hero to everyone aboard. But I felt sorry for him because I knew there must be a simpler way to do the job.

"With hundreds of passengers on deck yelling ‘Bravo’ as they hauled the sailor aboard, the second volunteer came forward with a do-or-die expression on his face. I elbowed up to the chief officer who was running the show.

" ‘Don’t send any more men over the side,’ I advised the mate. ‘I’ll get those bolts into the rivet holes from inside the ship. And I’ll do it quicker and no one will get drowned.’ "

" ‘Bravo,’ yelled the passengers near enough to hear me.

"When the noise quieted down, the mate wanted to know how I’d do the job. I told him I’d need the bartender’s help."

" ‘Bartender,’ he yelled. And then he started getting pink around the gills. " ‘Look, I’m not joking,’ I told him.

"Just then the captain came down from the bridge to see what was holding things up. I explained to him and the mate that I’d plug those holes from the inside. But the bartender would have to bring a dozen bottles of Sandpaper Gin to my cabin. To show the captain I wasn’t fooling, I asked him to send the chief engineer up so I could outline my plan.

"The skipper wanted the job done without losing that blue ribbon. So he said, ‘Will do.’

"Soon as the chief, the bartender with his 12 bottles, and the mate were in my room, I gave them my instructions. After pulling all the corks, I gave them to the chief and told him to fasten a fishline to each one. Then I told him to stick one cork at a time through a rivet hole from inside the fireroom.

" ‘You’ll have to slow the ship down and fish the cork out of the water with a long hook,’ I told the mate. ‘Maybe you can make one from a long piece of heavy wire or tubing.’

" ‘As for you,’ I told the chief, ‘have your machinist drill and tap the threaded end of each bolt for a tiny eye-bolt. Then when the mate has a cork fished out of the water from topside, he can remove the cork and tie the line onto the eyebolt screwed into the bolt’s end. Then heave the bolt over the side and have one of your engineers put it into the hole from down below in the fireroom. Once the bolt’s in place, slip the gasket and washer over the bolt as you did before. Tighten it and your job is done.’

"They all agreed that was a good idea. While I rounded up my shipmates from the yacht to do justice to the 12 bottles of Sandpaper Gin, my plans were carried out on deck and below. Inside of three hours all the bolts were tightened in place and the Rex was brought up to top speed again.

"When the job was finished I became the new hero. For the rest of the voyage I couldn’t spend a cent. Everyone was treating me . . . I even sat at the captain’s table.

"The Rex did make the fastest crossing, making the trip in 4 days, 13 hours, and 50 minutes. And all I had done was come up with what’s known today as Marmaduke’s Theory of Buoyancy. It goes like this: "If you push a cork into a bottle, the cork will float and maybe act like a check valve when you turn bottom’s up. But that won’t stop a seaman from getting lubricated if he’s got his mind made up."

Having laid out this most unusual ‘theory,’ the most unusual Marmaduke Surfaceblow turned back to his bottle. I walked out of the place as if in a trance. My head felt light because my mental gears had slipped a few cogs after listening to Marmy.