POWER reported on one of the first twin-cylinder "Otto" natural gas–fired engines that had recently appeared in the U.S. power market. The report notes that "engines of 100 horsepower are being now economically used where gas is low in price, as in England and other European countries" (Figure 1). 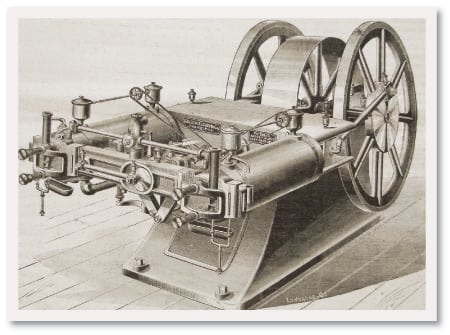 This new gas engine "is built in sizes beyond 15 H.P. only, and in it an ‘impulse’ takes place at every revolution of the flywheel. It can, therefore, run more steadily than single cylinder engines." The author goes on to explain that, "in this engine each cylinder acts alternatively as pumping or working cylinder, receiving either a full charge of explosive mixture or none at all. The use of partial charges for the regulation of speed in a gas engine disturbs the proper mixture. The governor controls the regulation of speed and power in a manner to admit gas to one cylinder only until its full power is exerted, when the second cylinder will set in to work."

Engine efficiency has always been important when selecting the proper engine for a power application. "We are told that the size rated by the makers at 25 indicated H.P. was found, on test, to indicate as high as 30 H.P., developing on the brake 24 actual H.P., thus showing but one-fifth or 20 per cent friction. Gas consumption is guaranteed by the makers to be 27 cubic feet per actual H.P." That’s about 10% thermal efficiency.

Integrated gasification combined-cycle (IGCC) projects are hotly debated as an "emerging" clean coal technology, but the technique of gasifying coal to produce gas for power generation dates to the early years of the power industry. In the August 1907 issue of POWER the editors reported on the new suction gas producer plant at Rocky Ford, Colorado.

"The city of Rocky Ford, Colorado [Ed: located about 75 miles southeast of Colorado Springs with a population of around 4,200 today] recently installed two 100-horsepower Weber gas engines [Figure 2] and suction gas producers for operating its water and light plant. Both engines are direct-connected by clutches to a 20-foot 5-inch shaft, from which are driven one 65-kilowatt 2200-volt alternator, with direct-connected exciter." 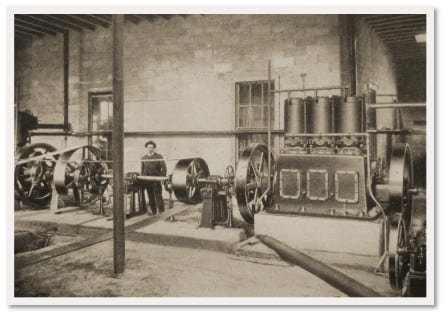 "The engines are of the three-cylinder vertical type, especially designed for operating on producer gas. The cylinders are 14 inch bore by 15 inches stroke, and the speed is 280 revolutions per minute. A 5-horsepower gasoline engine, direct-connected to an air compressor, is used in starting the engines. This gasoline engine is also belt-connected to an exhauster, which is used to build up the fires in the producers while the compressor is getting up air pressure [to start the engines]. The gas producers are located about 90 feet from the engines and . . . are especially built for operation on Colorado anthracite, an inferior grade of coal costing $7 per ton. The gas, after leaving the vaporizer, flows through a water bath at the bottom of the scrubber, then up through the scrubber proper, which is filled with coke covered by a continuous spray of water, and is then delivered to a gas receiver from which it is taken by the engine [Figure 3]. The gas contains 140 B.t.u. per cubic foot. It is further stated that the plant is operating upon one pound of coal per brake horse-power-hour"—about 25% thermal efficiency. 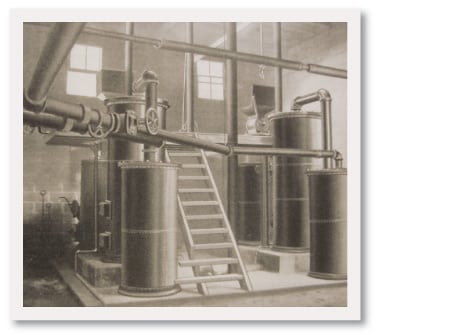 "Pumped-storage hydroelectric plants are used extensively in Europe, over 40 such projects being in operation. In the U.S. only one important plant of this type, the Rocky River station of the Connecticut Light & Power Company, has been put into service. The initial installation of a second pump-storage plant is now under construction on Lake Keuka near Bradford, N.Y. This plant is unique in that gas-engine-driven electric generators operating on gas taken out of the ground near the hydro plant will be used to supply the power for pumping.

"Thus, there is to be established a unique combination for power development: a hydro-electric station to produce power under a net head of 385 ft., and additional power from a vast store of natural gas 1,750 ft below the surface of the same lands. There are other power plants using combinations of prime movers, but it is believed that this is the only generating station where these two natural resources, water and natural gas, from the same land are used in a joint station [Figure 4]. 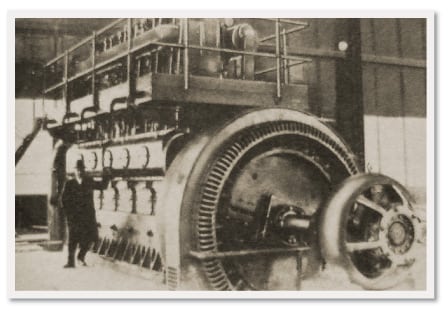 "After exhaustive investigation by engineers it was decided to install a gas-engine generating plant having a capacity of at least 10,000 hp. The first unit of 1,200 hp., now in operation, is of the Rathbun Jones types supplied by the Ingersoll-Rand Company. It is a six-cylinder four-cycle vertical unit—the largest vertical gas engine in operation in this country. The final phase embodies another 1,200-hp. unit, and three of 1,800 hp. capacity are now being built by Worthington Pump and Machinery Corporation." 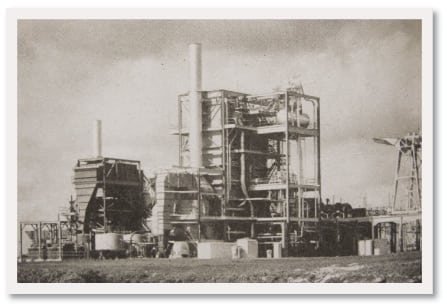 "After numerous studies and preliminary estimates, management decided to make this installation entirely outdoors." This configuration was unique at the time but has become very common for plants built in southern and western states.

Fifty years later Teche Power Station continues to economically produce power. In fact, the EUCG, whose representatives are frequent contributors to POWER on power plant benchmarking, recognized Teche in 2000 as a best performer in nonfuel O&M costs when compared with similarly sized units.