Though solar thermal tower technology has been around since the 1970s, to date, only one plant in the world commercially generates electricity: Abengoa Solar’s 11-MW PS10 tower just outside Seville, in Spain’s Andalucía desert has been grid-connected since early 2007. Because the technology relies on heat from solar energy that is reflected by mirror arrays (heliostats) onto a tower-mounted receiver, installations tend to be site-specific, expensive, and high-maintenance.

For instance, as Abengoa says on its website, one of the foremost difficulties it has experienced with the 18.5-acre PS10 project is controlling its 624-heliostat field. The heliostats, vertical panels each measuring 120 m2 (1,300 ft2), must be protected from high winds, which could damage their structural integrity. If they are not focused properly, they could damage the receiver. And if they are dirty, they could reduce the already-low total efficiency (15.45%) of the system.

Yet, Abengoa, like several entities around the world, deems the technology "feasible and reliable." Despite the economic crunch, and egged on by climate change concerns, it has developed and plans to inaugurate in the coming months a second-generation plant, the PS20, on land adjacent to the PS10. Like PS10, the PS20 will use water as the operating fluid, delivering 55 MWt of saturated steam at 250C (500F) to turn an electricity-generating turbine. But it will be much larger: Using 1,255 heliostats, PS20 is expected to produce up to 20 MW of power (Figure 2). 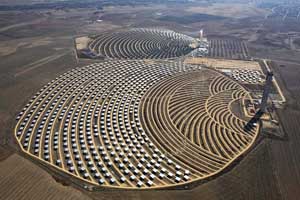 2.    Sunscrapers. Spain’s Abengoa Solar is wrapping up construction of a second-generation solar tower, the PS20, at its Solucar Solar Park at Sanlúcar la Mayor, just outside Seville. At double the capacity of the existing 11-MW PS10 plant at the same site, which Abengoa says is the world’s first commercial solar tower plant, the new plant will consist of 1,255 heliostats and a 160-meter/525-foot-tall tower. The company also plans to build a third tower, the AZ20, which will improve on the technologies used in PS10 and PS20. By 2013, the site is also expected to house three solar trough plants, each 50 MW, and an experimental concentrated solar power plant based on Sterling dish technology. Courtesy: Abengoa Solar

Several announcements in the past year hint that even larger and more diverse solar tower projects are on the horizon. BrightSource Energy, for example, will this year begin construction on the first of three phases of the 400-MW Ivanpah Solar Power Complex in California’s Mojave Desert. The first two phases alone will require the installation of 100,000 heliostats; the entire facility will cover 3,900 acres.

Spanish company SENER, meanwhile, is building a 17-MW facility, with a mirror field measuring 298,000 square meters (3.2 million ft2), also in Andalusia (Figure 3). That plant, Gemasolar (previously known as "Solar Tres"), has been under development for seven years now at the hands of SENER and, more recently, Abu Dhabi firm Masdar. It should be operational by 2011. Unlike PS10, it will use molten salt heated to 565C (1,049F) to transfer heat. 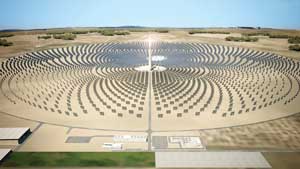 3.    Worth its salt. SENER and Abu Dhabi firm Masdar are building the 17-MW Gemasolar (previously “Solar Tres”) facility in Fuentes de Andalucía, in the province of Seville. That plant, slated for completion by 2011, will use molten salt technology developed at the U.S. Department of Energy’s Mojave Desert Solar One and Solar Two projects. The companies say Gemasolar will be the “world’s first utility-grade solar power plant with central tower and salt receiver technology.” Courtesy: Torresol Energy

Molten salt technology was developed from U.S. Department of Energy pilot tests in the 1990s of the Solar One and Solar Two projects in the Mojave Desert. This method will give the Spanish plant a thermal storage advantage of 647 MWh (permitting 15 hours of turbine load) over PS10’s paltry 20 MWh with steam (or 30 minutes), according to the Fraunhofer Institute for Systems and Innovation Research. But that advantage will have a cost, the group said: Gemasolar’s total efficiency is 14% — worse than PS10’s 15.45%. Added to that, due in large part to the associated storage technology, Gemasolar’s generation costs will be €78.5 /MWh ($105.3/MWh) higher than that of PS10.

The upsurge in interest in solar tower technology is also evident in the more numerous reports of demonstration projects, real and planned. In June 2008, scientists at the German Aerospace Center put into commission a solar-hybrid gas turbine that uses concentrated solar radiation and biodiesel at a test plant on the CESA-1 solar tower of the Plataforma Solar de Almería in Spain.

More recently, German firm Kraftanlagen München has said it is completing construction of the federally sponsored Jülich power tower, a 1.5-MWe project based on the volumetric effect to increase efficiency. Solar radiation concentrated by a mirror field of 18,000 square meters is absorbed by the porous structure of a volumetric receiver and converted to heat: As ambient air cools the outer part of the receiver, it heats up to about 700C at the inner surface. That heat is then used in the conventional steam power process.

Meanwhile, nations like Namibia, Morocco, and India are awaiting an Australian test of a solar tower technology that uses a chimney-like updraft to drive turbines and has the potential capacity of about 400 MW. That technology is based on Spain’s 50-kW Manzaneres prototype, which operated for seven years in the 1980s before it was decommissioned.

Even China has gotten into the game. The China Academy of Sciences has designed and is looking to build and test its first solar tower by 2010 in suburban Beijing. The $14.6 million Dahan project, rated at 1 MW, would comprise 100 curved heliostats to concentrate radiation on a 100-meter-tall tower, using water as the heat transfer fluid (Figure 4). According to project leader Dr. Zhifeng Wang of the academy’s Solar Energy Laboratory, the plant differs from existing tower plants in two ways. First, it has a two-stage thermal storage system: A high-temperature storage tank would use "conductive oil" to produce superheated steam while a second low-temperature tank downstream would use steam as the storage medium to produce saturated steam. Second, to make full use of the land on which the plant will be used, the design also calls for growing crops under the heliostats, Wang told POWER. 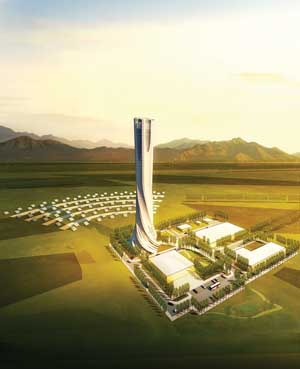 4.    Solar to shine in Beijing. This is an artist’s conception of the solar tower technology planned for use in suburban Beijing. Courtesy: China Daily

If is the Dahan project is successful, it could be expanded to a 5- to 10-MW project by 2015. Wang said that though the cost of power produced by the plant would initially be expensive, and it was true that China was looking to meet its soaring energy needs through new nuclear and coal builds, the Chinese government was "vigorously" supportive of the project because it was committed to "global environment protection and carbon dioxide reduction."