Since the early 1860s, when French engineer and inventor Auguste Mouchout used a glass-enclosed cauldron, a polished parabolic dish, and the sun’s heat to produce steam for the first solar steam engine, solar thermal energy (STE) technology has come a long way. Today, an assorted range of technologies is in use or on-line — including parabolic troughs, power towers, and dish/engine systems — and several others are in development. The spate of announcements about solar thermal energy this October and November showed how diverse that range can be and how far those technologies have come.

The plant, consisting of rows of 1,000-foot-long mirrors, was built in seven months by 150 workers (Figure 1). The collector lines will generate up to 25 MW of thermal energy to drive a steam turbine at the adjacent Clean Energy Systems power plant. Ausra said that it had dropped costs by simplifying the system’s design and by mass-producing the mirrors at its factory in Las Vegas, Nev. 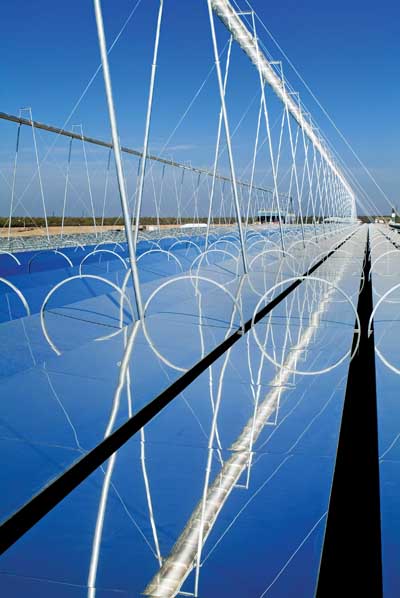 Kimberlina is just a start for solar thermal power in California. Ausra is now developing a 177-MW solar thermal power plant for Pacific Gas and Electric Co. in Carrizo Plains, west of Bakersfield. In addition to that plant, the California Energy Commission is reviewing proposals for five large solar thermal plants, including Stirling Energy Systems’ SES Solar Two Project (750 MW), BrightSource’s Ivanpah Solar Tower (400 MW), Beacon Solar’s 250-MW solar trough project in Kern County, and two hybrid projects that would use solar troughs to produce a total of 112 MW. All six projects would add 1,689 MW to the grid. The federal Bureau of Land Management is also studying requests from developers to build 34 more solar plants in Southern California, all of which would produce some 24,000 MW.

Siemens Energy said it would supply an industrial steam engine to one of the world’s first commercial solar tower power plants, Sener’s 19-MW Solar Tres project near Seville in Spain — a project that the company started seven years ago. The solar power plant will bundle sunlight using sun-tracking mirrors (heliostats) placed in arrays around the tower and reflect the light directly into a receiver at the top of a tower about 400 feet high.

The heliostats will be arranged over a surface area of 320,000 square meters, about the size of 60 football fields. The project will use salt for heat transfer in the interior of the receiver instead of the thermo oil typically used. Sunlight concentration will produce temperatures of over 1,562F at the solar receiver. The salt, heated to approximately 1,049F as a result, flows in a molten state through a heat exchanger, in which sufficient steam is produced to operate a steam turbine generator.

Siemens, which makes turbines for parabolic mirror solar thermal pants, customized the two-cylinder reheat SST-600 turbine to meet the technology requirements for the Sener solar tower project. The company said the reheat will enhance the plant’s overall efficiency. It also worked with Sener to create a concept that protects the steam turbine from cooling down too much at night.

Whereas most parabolic trough mirrors are made of heavy curved glass, the SkyTrough, unveiled recently by start-up company SkyFuel Inc. and scientists from the National Renewable Energy Laboratory, is made from SkyFuel’s own ReflecTech, a highly reflective and shatterproof silvered polymer film that is laminated to thin aluminum sheets (Figure 2). The film offers several advantages: It allows for larger and fewer panel segments than in previous trough designs; according to SkyFuel, it cuts the costs of the parabolic trough concentrator by 35%; and it can be manufactured in high volumes. 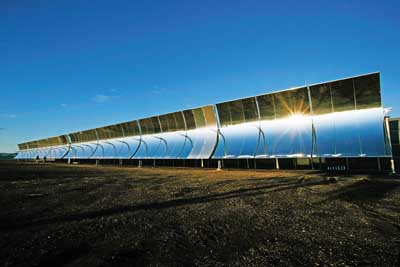 2. All that reflects is not glass. The SkyTrough designed by SkyFuel Inc. and the National Renewable Energy Laboratory uses a highly reflective and shatterproof silvered polymer film that is laminated to thin aluminum sheets in place of glass. The trough is 375 feet long, 20 feet wide, and, according to SkyFuel, it features the largest parabolic trough modules ever built. Courtesy: SkyFuel Inc.

Unlike solar power competitors Ausra and BrightSource, SkyFuel said it is reluctant to build its own power plants using this technology. It is in talks with several companies looking to build solar thermal plants in the U.S. Southwest, however. The company is also working on its own version of the linear Fresnel technology — using molten salt as the heat transfer fluid.

The Electric Power Research Institute (EPRI) began conducting a case study this October at two natural gas combined-cycle facilities — one at Dynegy Inc.’s Griffith Energy Facility in Kingman, Ariz., and the other at NV Energy’s Chuck Lenzie Generating Station near Las Vegas — to help power companies add solar energy to fossil-fueled electric power plants. As part of the larger study, EPRI will also conduct a parallel study at coal-fired power plants next year, although the sites for the study have yet to be determined.

The 12-month projects will involve adding steam generated by a solar thermal field to a conventional fossil fuel – powered steam cycle, either to offset some of the coal or natural gas required to generate power or to boost overall plant power output (see POWER, July 2008, "Options for reducing a coal-fired plant’s carbon footprint, Part II").

As EPRI reasoned, 27 states in the U.S. have enacted renewable portfolio standard policies, and some include specific mandates that a percentage of the requirement be met with solar energy. However, most current solar applications are not cost-competitive with other power-generating options. Using solar to augment coal or natural gas potentially is, according to EPRI, "the lowest-cost option for adding solar power to the generation fleet, as it utilizes existing plant assets. And because the highest-intensity solar energy typically is within a few hours of peak summer loads, it makes solar augmented steam cycles an attractive renewable energy option."