Swiss power technology group ABB, which pioneered gas-insulated switchgear 50 years ago, in April announced it had commissioned switchgear rated to handle 1,100 kV. The development marks the biggest leap in capacity and efficiency of AC power transmission in more than two decades.

ABB and Xian Shiky, a Chinese switchgear manufacturer, developed the technology for a pilot project launched in 2006 by China’s national transmission body, State Grid Corp., to demonstrate the feasibility of AC power transmission at ultrahigh voltage (UHV). The commissioned UHV gas-insulated switchgear (Figure 8), a central component of UHV electricity transmission lines designed to carry huge amounts of electricity over vast distances with very low losses, reportedly has a switching capability of 6,900 MW. This "means it can turn power equivalent to the average electrical consumption of Switzerland, a country with more than 7 million inhabitants, on or off within milliseconds," ABB said in a statement. 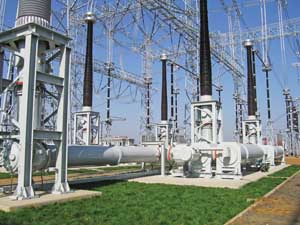 State Grid in January deployed the 640-km (398-mile) UHV AC demonstration project, and it will now invest more than $14 billion to build 17,600 km of new 1,000-kV lines by 2012. "This project marks China’s major breakthrough in long-distance, large-capacity, low-loss UHV core technology and localization of power equipment. It also carries great significance for the optimization of energy resource allocation, and protection of national energy security and power supply," the company said in statement earlier this year.