Gas hydrates, a form of natural gas that forms when methane from the decomposition of organic material comes into contact with water at low temperatures and high pressures, could play a role — even if a small one — in future fuel supplies, researchers attending a March meeting organized by the American Chemical Society suggested.

"These gas hydrates could serve as a bridge to our energy future until cleaner fuel sources, such as hydrogen and solar energy, are more fully realized," Tim Collett, PhD, a research geologist with the U.S. Geological Survey (USGS), said in a statement. Gas hydrates (Figure 9), known as "ice that burns," hold special promise for helping to combat global warming by leaving a smaller carbon dioxide footprint than other fossil fuels, he and colleagues noted. 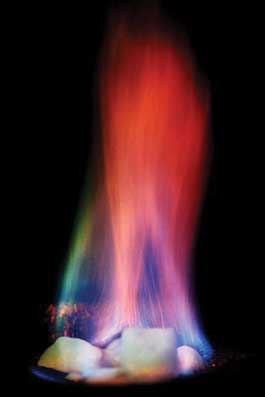 Although scientists have known about gas hydrates for decades, their potential use as a fuel has only recently been considered. One reason for this is that they are hard to find: Gas hydrates, also known as "clathrates," form in cold, high-pressure conditions typically found deep below the oceans and underground on land in certain parts of the world, including the ocean floor and permafrost areas of the Arctic. But now, researchers have identified tremendous stores of gas hydrates throughout the world, including in the U.S., India, and Japan. In addition to Alaska, the U.S. has vast gas hydrate deposits in the Gulf of Mexico and off its eastern coast.

Last November, a team of USGS researchers estimated that 85.4 trillion cubic feet of natural gas could potentially be extracted from gas hydrates in Alaska’s North Slope region. "It’s definitely a vast storehouse of energy," Collett said. "But it is still unknown how much of this volume can actually be produced on an industrial scale." That volume, he said, depends on the ability of scientists to extract useful methane, the main ingredient in natural gas, from gas hydrate formations in an efficient and cost-effective manner.

"Once we have learned better how to find the most promising gas hydrate deposits, we will need to know how to produce it in a safe and commercially-viable way," said Ray Boswell, PhD. He manages the National Methane Hydrate R&D Program of the U.S. Department of Energy’s National Energy Technology Laboratory in Morgantown, W.Va. "Chemistry will be a big part of understanding just how the hydrates will respond to various production methods."

One of the more promising techniques for extracting methane from hydrates involves simply depressurizing the deposits, he says. Another method involves exchanging the methane molecules in the "clathrate" structure with carbon dioxide. Workers can, in theory, collect the gas using the same drilling technology used for conventional oil and gas drilling.