U.S. scientists concerned about carbon dioxide (CO2) leaks from sequestration attempts have been pursuing the option of natural chemical reactions within the earth to turn the carbon back into a solid, and they have identified an abundant supply of large rock formations around the world that could be used a vast sink for the heat-trapping gas.

In their report, "Mapping the Mineral Resource Base for Mineral Carbon-Dioxide Sequestration in the Conterminous United States," scientists from Columbia University’s Lamont-Doherty Earth Institute and the U.S. Geological Survey isolated 6,000 square miles of ultramafic rocks at or near the surface (Figure 6). These formations, they say, could be large enough to stash more than 500 years’ worth of U.S. CO2 production. 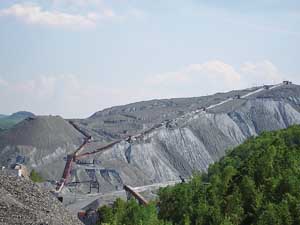 6.    As solid as a rock. U.S. scientists believe that the 6,000 square miles of ultramafic rock formations around the nation could potentially stash more than 500 years’ worth of the nation’s carbon dioxide emissions. To accelerate the chemical reaction within the rock—and ultimately solidify the heat-trapping gas by turning it into a mineral—they are experimenting with dissolving CO2 in water and injecting it into the rock. The mineralization process would also render harmless the tailings at former asbestos mines in large peridotite formations like Vermont’s Belvidere Mountain (shown here). Source: U.S. Geologic Survey

Ultramafic rocks typically form in Earth’s mantle, starting some 12 miles under the surface and extending down hundreds of miles. Bits of these rocks — peridotite, dunite, lherzholite and others — may be squeezed to the surface when continental plates collide with oceanic plates, or, less often, when the interiors of continents thin and develop rifts. Because of their chemical makeup, when the rocks are exposed to carbon dioxide, they react to form common limestone and chalk.

A map accompanying the report shows that most such rocks are found in and around coastal mountain ranges, with the greatest concentrations in California, Oregon, and Washington, and along the Appalachians from New England to Alabama. Some also occur in the interior, including in Montana. Worldwide, other formations are scattered across Eurasia and Australia.

Another rock, common volcanic basalt, also reacts with CO2, and efforts are under way to map basalt’s locations in detail as well. The U.S. Department of Energy has been working on a basalt atlas for the northwestern U.S. as part of its Big Sky Carbon Sequestration Partnership; extensive mapping in Washington, Oregon, and Idaho has already been done through Idaho State University.

A major drawback to natural mineral carbonation is its slow pace: Normally, it takes thousands of years for rocks to react with sizable quantities of CO2. The researchers are experimenting with ways to speed up the reaction by dissolving CO 2 in water and injecting it into the rock, as well as capturing heat generated by the reaction to accelerate the process.

"It offers a way to permanently get rid of CO2 emissions," said Juerg Matter, a scientist at Columbia’s Lamont-Doherty Earth Observatory, where a range of projects are under way. Matter and his colleague Peter Kelemen are currently researching peridotite formations in Oman, which they say could be used to mineralize as much as 4 billion tons of CO2 a year, or about 12% of the world’s annual output.

Matter is also preparing to participate in the first major pilot study of CO2 sequestration in a basalt formation in Iceland. In May, he and three other Lamont-Doherty scientists will join Reykjavik Energy and other entities to inject CO2 -saturated water into basalt formations there. One of the models they will test could eventually help capture CO 2 directly from power plant stacks and other industrial facilities, combine it with water, and pipe it into the ground. The Icelandic formation is expected to absorb 1,600 tons of CO2 generated by a nearby geothermal power plant over nine months.