Concerns about global warming, rising fossil-fuel prices, and summer blackouts have put the ways that America generates and uses electricity on the front page. This year, for the first time, President Bush mentioned climate change in his State of the Union address and proposed building another generation of nuclear power plants to mitigate it.

California’s and Australia’s proposals for eliminating incandescent bulbs have been newsworthy as well. Business magazines have endorsed Wal-Mart’s and Whole Foods’ wind power ventures. Computer firms advertise the energy efficiency of their new chips, not just their clock speed. Automotive magazines say hybrid vehicles that can be "refueled" by plugging them into an AC socket are on the near horizon.

All of these policy shifts and products may reduce emissions of heat-trapping gases, but they will do nothing to relieve the strain on already-congested U.S. transmission grids. Businesses already use fluorescent bulbs, and households are lighted during non-peak hours. Plug-in hybrids will reduce consumption of gasoline but increase electrical traffic on grids. Wind farms and geothermal plants are usually located far from loads, and they need new transmission lines to bring their output to market.

Many of the anticipated changes in usage patterns will increase the need for reactive power. Reactive power is needed to ensure grid stability—it maintains the voltage levels required to drive "real" power, or megawatt-hours, over transmission lines. A shortage of reactive power can compromise the safe operation of a grid; indeed, it was a key factor in the great Northeast blackout of August 2003. Power lines operating at unity power factor also operate more efficiently; they can carry more current without overheating than identically rated lines operating out of phase.

A grid’s overall need for reactive power can’t be satisfied by one generator. Volt-amperes reactive (VARs) must be supplied and absorbed near each load center. Let’s now take a closer look at some of the technologies and methods available for supplying and absorbing reactive power.

The U.S. Department of Energy (DOE) and private companies alike are working on new technologies—such as high-temperature superconducting (HTS) cables and ultrahigh-voltage lines—that will increase the carrying capacity and reduce the losses of transmission lines. Inevitably, both will increase demand for reactive power.

The Task Force found similar problems with ultrahigh-voltage lines. "Ultrahigh-voltage lines would enable more power to be transmitted over paths that currently [use] conventional transmission lines, [at ratings] such as 230 kV, 345 kV, and 500 kV. The highest transmission line voltage in North America is 765 kV. Ultra high-voltage lines are technologically possible, but would require larger rights-of-way, generate stronger electromagnetic fields, and produce much more reactive power (which must be managed by adding reactive compensating devices)."

The traditional sources of reactive power generation on grids and at central-station power plants won’t provide enough VARs in the future. But—according to an April 2006 report prepared for the DOE by Oak Ridge National Laboratory and Energetics Inc. and titled "A Preliminary Analysis of the Economics of Using Distributed Energy as a Source of Reactive Power"—distributed generation (DG) plants could provide up to 10,000 MVAR.

Power companies have a variety of static and dynamic reactive power options to choose from. Static devices are less costly than dynamic ones, but they are slower to react. In addition, because static reactive power sources are dependent on line voltage, they cannot change their output quickly when voltage remains constant. When the line voltage drops, so does the reactive power output.

Because the more-costly dynamic reactive power sources can adjust their output independent of line voltage, they can better guard against voltage collapse. To optimize system performance and cost (and ancillary-services revenues), most DG plants deploy a mix of static and dynamic reactive power devices. Among the more common are capacitor banks, static VAR compensators, static compensators, and synchronous condensers.

Capacitor banks. Although capacitors are inexpensive, reliable, and easy to install, they have three big disadvantages that prevent them from serving as a complete reactive power solution. Capacitors are large, so the cost of plant real estate must be included in economic considerations. They can supply reactive power, but they cannot absorb it. And when faced with rapidly increasing load and voltage drop, capacitors become increasingly less effective and can actually contribute to the downward spiral characteristic of voltage collapse.

Static VAR compensators. Static VAR compensators (SVCs) are switches made of shunt capacitors and reactors connected by thyristors. They offer a greater degree of voltage control than simple capacitors. Compared with capacitor banks, SVCs’ biggest advantage is their ability to absorb and supply reactive power. But, like capacitors, their reactive power output varies with the square of the voltage. This characteristic makes them poor at coping with voltage instabilities and preventing voltage collapses.

Static compensators (statcoms). Statcoms are a step above capacitor banks and SVCs. They operate by using thyristors or transistors to correct the line’s phase angle. Because they use power electronics rather than capacitors and reactors, their response time is measured in microseconds rather than the milliseconds typical of capacitor banks. Although statcoms require little space, they cost roughly three times as much as SVCs.

Variations on the basic technology include the Dynamic VAR (D-VAR) systems of HTS pioneer American Superconductor Corp. (www.amsuper.com) and the Purewave Dynamic Statcoms of S&C Electric Co. (www .sandc.com). Both devices are available in capacities of 2 MVAR and higher and can survive overloads of three times their rated capacity for up to 3 seconds. Another example is the WindVAR system of General Electric (www.gepower.com). Its voltage controller, placed at the point of interconnection, measures line voltage, compares it to the grid requirement, and computes the necessary reactive power. The signals delivered to the controllers of individual wind farm generators excite them to the desired power factor.

Synchronous condensers. These devices offer a way to respond immediately to power fluctuations. They can supply or absorb VARs, as needed, to produce a unity power factor.

The big pluses of synchronous condensers are their ability to supply or absorb VARs and to continually adjust their output level in tiny increments. This results in continuous and smooth balancing of the system. The biggest constraint on the use of a synchronous condenser is the need to site it near where reactive power is needed.

One approach to supplying reactive power is to use a custom-built device that is synchronized to the grid and provides the needed correction of power factor. As an example, American Superconductor and Tennessee Valley Authority (TVA) developed a unit called the SuperVAR—an HTS dynamic synchronous condenser that costs around $1 million for a 10-MVAR unit. TVA installed the initial prototype in 2004 to deal with a metals factory in Gallatin, Tenn., that was causing its grid to "flicker." SuperVARs are now available commercially from American Superconductor.

"SSS Clutch Co. has installed clutches between generators and several drivers including reciprocating engines, steam and combustion turbines," says the DOE report. "The clutch acts by completely disengaging the prime mover and the generator when only reactive power is needed. When active or real power is needed, the SSS clutch automatically engages for electric power generation."

The DOE study also examined the economics of using synchronous generators rather than capacitors as reactive power sources. For cost-comparison purposes, it looked at the capacitive techniques employed by the Lenoir City Utilities Board (LCUB) serving customers near Knoxville, Tenn. LCUB, whose load has been growing at 5% annually, typically gets its reactive power from 900-kVAR capacitor banks mounted on power poles. According to the study, installing a clutch on a 5-MVAR turbine-generator at one of the utility’s substations would cost about $50,000. That would be more than twice as much as the $22,000 capital cost of a capacitor bank with comparable output. But the clutch would cost $5,500 less per year to operate and maintain than the capacitors. Over the 20-year life of the clutch, the $110,000 O&M saving would more than offset its higher capital cost.

Indeed, for Louisiana’s Lafayette Utilities System (LUS), the use of clutches as synchronous condensers was a key part of a recent upgrade of both capacity and reliability.

"We recently added 200 MW of local generation capacity to accommodate the growth of our community and to provide some insurance against disruption of the regional grid," explains Terry Huval, director of utilities for LUS. "Since 2001, the grid has experienced some 290 TLRs [transmission loading reliefs]. We’re committed to supplying our customers with reliable power."

The new generation capacity took the form of two simple-cycle gas turbine-generator plants, each powered by two 50-MW GE LM6000 units (Figure 1). At one of the new plants, SSS Model 260T clutches (Figure 2) were installed between the turbines and generators, enabling the generators to be operated as motors. In this mode, they can serve as synchronous condensers. 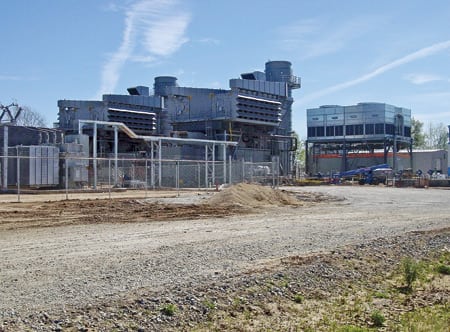 1. Making VARs. Lafayette Utilities System placed a clutch between the turbine and generator of each of the two GE LM6000 units at this new plant. The clutches enable the generators to operate as synchronous condensers that can supply reactive power to the grid, or absorb it, as conditions warrant. Courtesy: SSS Clutch Inc. 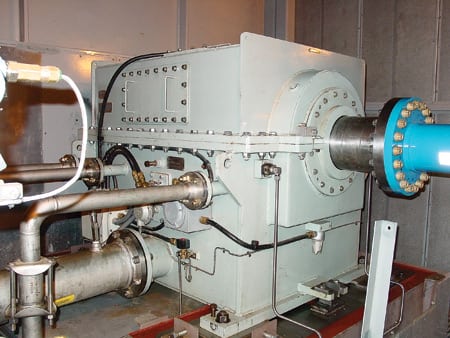 2. Disconnecting driveline. The clutch that disengages the gas turbine from the driveline when in synchronous condenser mode is located between the turbine and the generator. Courtesy: SSS Clutch Inc.

"Operating the generators as motors increases the amount of reactive power that can be supplied or absorbed, compared to operating them as generators and varying their excitation level," explains Gregory Magarie, PE, an executive engineer-electrical in R.W. Beck Inc.’s Boston office who served as the lead electrical engineer on the project. "And compared to using fixed capacitors to control grid voltage, using clutches as synchronous condensers provides greater flexibility. They can follow load quickly and automatically, rather than in the fixed steps that other systems are limited to."

The clutches (Figure 3) are as easy to install on old generators as on new one. For a boost in revenue from ancillary services, a central-station or DG plant might even take a turbine-generator out of retirement, install a clutch on it, and run the unit’s generator only as a motor to produce or absorb VARs. "Taking units out of mothballs could make sense in areas where the need for reactive power is high but getting it from new generation either is not cost-effective or precluded for other reasons," Magarie says.

Power companies have a widening array of options to choose from in stabilizing transmission. Thanks to their low capital cost, capacitor banks will likely continue to supply the lion’s share of U.S. reactive power needs. But, if the consequences of poor power factor—especially its negative impact on service reliability—are taken into account, initially more expensive statcoms and synchronous condensers may turn out to be cheap by comparison.