If little else is clear about the future of the U.S. power industry, this much is: Electricity rates are going up across the country, and will continue to. None of the esteemed panelists at the CEO session of the ELECTRIC POWER 2007 Conference & Exhibition in Chicago last month actually said those words. But much of what they did say supports that conclusion.

The public demand for solutions to global warming (see story) is one reason power prices will rise (Figure 1). Others include substantial escalations in the capital costs of new units (well before any dirt is turned), a woefully inadequate (and shrinking, due to retirements) talent base to draw from in rebuilding staff and skill sets, a tight market for skilled and unskilled labor, and an insatiable global demand (led by China) for commodities. 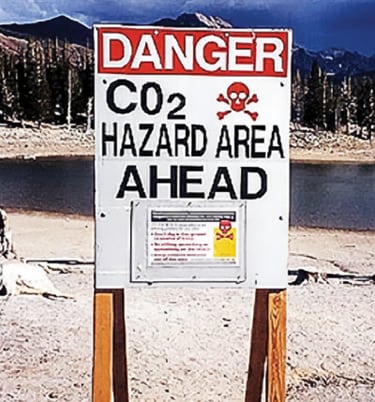 1. Sign of the Carbon Age. In California’s beautiful Mammoth Mountain region, seismic activity a few years ago began CO2 releases into the soil, essentially poisoning the vegetation. The CO2 level around Horseshoe Lake is many times the normal level, and there are many signs posted telling you to leave if you begin to find yourself experiencing fatigue or vertigo. Courtesy: USGS

Dr. Robert Peltier, PE, editor-in-chief of POWER magazine, kicked off the session by imploring his audience to engage in critical thinking, rather than sharing opinions. He decried the "coarseness of the discourse on global warming" that has become a "political dogfight" rather than a "scientific discussion." As result, Peltier concluded, we have "energy politics, not an energy policy." Alluding to the fact that the electricity industry is likely to be an earlier target of global warming legislation than the automobile industry, Peltier said, "Cars vote, power plants don’t."

Apparently, ratepayers vote, too. David Saggau, president and CEO of Great River Energy, the nation’s fourth-largest generation and transmission cooperative, stated that his customers are asking for environmental stewardship. Great River supports a national CO2 cap-and-trade program, especially if "piecemeal legislation" is the alternative, Saggau stressed. With respect to global warming, he believes that energy conservation is an "untapped resource." Saggau said that his utility plans to do its part to meet a 25% renewable portfolio standard (RPS) by 2025 and intends to reduce its greenhouse gas (GHG) emissions to year 2000 levels by 2020.

Jim Turner, president and chief operating officer of Duke Energy’s regulated businesses, noted that his utility is actively arguing for carbon legislation, even though Duke is one of America’s largest consumers of coal. He borrowed a quote used by his CEO, Jim Rogers: "If you are not at the table, then you are on the menu." In other words, the time has come to recognize that "uncertainty" about the future carbon regulatory framework is the challenge and that we "have to get the rules right." Furthermore, he added, "nuclear becomes the global warming solution under tough CO2 legislation."

Guy Gorney, president of Midwest Generation, which also owns and operates a sizable fleet of coal-fired plants, said he realizes all too well that carbon legislation "is coming down the pike" and that Midwest Gen needs to "protect the company and grow under any legislative scenario." Two components of that growth strategy are to invest in thermal efficiency improvements at existing coal plants and to develop wind energy. "Wind is a large part of our growth plan," Gorney noted.

Coal to keep the lights on

Peltier’s realistic analysis of electricity demand over the next five years, and his sobering review of the supply options available to meet it, underscores the major shift in thinking caused by concerns about global warming. Assuming that demand will rise at only half the rate of GDP growth due to demand reduction, and that demand has historically averaged 2% annually, we will still need 78,000 MW of new capacity by 2010, or a whopping 20,000 new megawatts per year.

However, new nuclear units won’t be ready to come on-line until the 2015–2020 time frame, and forecasted growth in wind capacity is just 2,500 MW/year. Although imports of liquefied natural gas are growing, at their expected price of $10/mmBtu, gas-fired plants simply won’t be competitive. What’s more, gas pipelines are running at capacity, and, as Peltier noted wryly, "if you think it’s hard building a coal-fired power plant, try building an interstate pipeline."

Coal is the only remaining option for fueling needed baseload capacity, he argued (Figure 2). Given the high costs and unproven reliability of immature integrated gasification combined-cycle (IGCC) technology—the basis of what are essentially 600-MW coal "refineries," according to Peltier—conventional pulverized-coal plants will have to carry the capacity ball until 2015. Thus, global warming and energy politics butt heads with the practical reality of having to use substantially more coal to meet electricity demand.

2. It’s good to be king. Rising U.S. electricity demand though 2030 will have to be met by 20,000 MW of new supply each year, or the lights will go out. Given the long lead times of nuclear capacity, the price of gas, and the negligible contributions of renewable energy, the only near-term option is to build more conventional pulverized-coal plants. Source: DOE/EIA

Here’s where those escalating costs enter the picture. Turner reported that after Duke announced plans to build a two-unit, 1,600-MW supercritical coal plant, its initial capital cost estimate of $2 billion became $3 billion after firm bids were solicited. As a result, the plan was reduced to one unit. Midwest Generation, reported Gorney, planned to install scrubbers at its Homer City station in Pennsylvania, but costs were almost double what was originally anticipated. "In 2005, scrubbers were a slam dunk," he said. "Eleven months later, we were looking for other options."

For those who experienced the cost escalations of the U.S. nuclear construction program of the 1980s, these figures are distressing, especially because they represent escalations in estimates, not even actual construction costs.

Good help is hard to find

Material costs are one thing. Labor is another. Session moderator Stephen Greenwald, an attorney with Davis Wright Tremaine LLP, asked the panelists about aging workforce issues. Dean Bain, president of Primesouth Inc., a provider of O&M services to power plants and other industrial facilities, characterized the problem as "universal." "You can’t steal talent from other industries." That’s because virtually all energy infrastructure industries are firing on all cylinders right now. He conceded that the "talent pool will be very, very sparse in the future."

Saggau indicated that over 60% of his company’s employees will retire in five years. What to do about this is one of six of his strategic imperatives. Another frightening stat: Most of the boilermakers on site during a recent six-week outage had to be brought out of retirement. Gorney believes his company lacks "bench strength." What’s more, new workers don’t necessarily like the work environment of a power plant and are willing to accept less pay for better surroundings.

The aging workforce issue isn’t about replacing bodies, but rather about replacing expertise. Saggau said his company is hiring new employees before they are needed; then Great River Energy has the newbies shadow old hands to soak up their knowledge and experience before they depart. Gorney’s Midwest Gen created an "assistant station director" position as a form of succession planning for the generating assets. Still, he said, we’re "not as successful as we would like to be" in this area.

Of course, assuming that all workers will retire at 65 is necessary to play it safe, but it’s overly conservative. Being eligible to retire, and actually retiring, are two different things, especially when you consider that people live much longer these days. Funding 20 to 30 years of retirement is daunting. Just as so many old fossil plants are staying on-line past their original retirement date, so too may many fossil plant workers.

Wind: Not ready for prime time

A diverse spectrum of responses followed when Greenwald asked panelists about the related topics of regional portfolio standards and transmission needs for wind. "People get irrationally exuberant about renewables," said Turner. Nonetheless, he seemed pretty exuberant about alternative sources of energy, like hog and turkey wastes, being counted as sources of renewable credits.

Bain urged the audience to envision the innovation that a national RPS could spur in the field of renewable energy. Saggau wasn’t sanguine about the prospects for such a standard but said that "regional standards could work." Though wind turbines are more efficient today than they were 10 years ago, he said, 100 MW of wind still requires backup by 100 MW of a more-reliable type of generation. Also, he added, you can’t avoid the reality that the source of wind energy is "indigenous." In that sense, wind potentially reduces energy imports.

Although wind energy is a large part of Midwest Gen’s growth plan, Gorney said he worries about what will happen after the federal production tax credit (PTC) for wind expires. We still "have to make a bona-fide business" out of wind, he stressed. Gorney also characterized some of Midwest Gen’s wind projects as "merchant," perhaps as an indication of the company’s business strategy.

Hats off to this carbon cap plan

If global warming is driving generating capacity additions, and energy politics is driving global warming legislation, then it’s nice to know that one of the proposals in Congress for carbon management is realistic, according to Peltier. The proposal, by Sen. Jeff Bingaman (D.-N.M.), calls for a framework based on tons of CO2 per dollar increment of GDP. This approach, Peltier says, distributes costs for mitigating global warming across the entire economy. The bill, which is now in draft form, estimates that GHG emissions could be cut 14% by 2030. It also includes a "safety valve" to maintain the ability to buy carbon allowances at a fixed price. Essentially, this plan fixes the price of carbon at $7/ton of CO2, which would keep coal a competitive plant-fueling option.

Another factor in this debate, suggested by the panel, is more subtle. State industry oversight regimes have largely returned to a regulated or contractual rate of return model for capacity additions. In such environments, independents likely won’t build baseload capacity without a long-term power-purchase agreement, and utilities won’t build unless they’re assured of capital cost recovery. As an industry executive, it’s much easier to accept the additional costs—whether for excess wind capacity to compensate for a wind farm’s intermittent output, for sequestering CO2 from traditional or IGCC plants, for environmental retrofits, or to build nuclear reactors—if there is a measure of certainty in cost recovery before groundbreaking.

Turner made this point clear with an example. In his company’s five-state territory, customers enjoy low rates relative to the national average. Ohio is the exception, where a rate stabilization plan remains in effect through 2008, and where Turner says "no one is building, no one is talking about baseload capacity," until cost recovery is decided. Turner emphasized that Ohio is now about 1,500 MW short of the capacity needed for an adequate reserve margin. Gorney noted that, despite Illinois consumers’ outcry over the high bid prices in last fall’s rate freeze–ending reverse capacity auction, we "can’t make any money at $60/MWh." All of Midwest Gen’s capacity is contracted.

Of course, nothing is ever certain, except perhaps that someone will have to pay the piper. Ultimately, that someone is the ratepayer. Saggau noted that "consumers will demand cheap power and green power—they will not choose." That may be true in Great River’s service territory. If that’s the case for the rest of the country, then it looks like we’ll have to be careful how we define "cheap" or "green."