Could the transformation of carbon dioxide (CO2) into carbonates and oxides solve the problem of greenhouse gas emissions (GHG) from fossil-fired power plants? Some companies are betting that such processes could make everyone happy and even create new profits. Buzz has been growing about this approach, though the concept has been around for many years.

Indian scientists, for example, have been looking at bacteria that can be used as enzymes to convert CO2 into calcium carbonate (CaCO3), which has multiple uses. Meanwhile, companies around the world — including Carbon Sense Solutions Inc. (Canada), Novacem (UK), Calix (Australia), and C-Fix (The Netherlands) — have been working on processes that use CO2 to create minerals and materials that have market value.

Above-ground sequestration of CO2 would seem to be simpler and more reliable than storing the gas below the planet’s surface, because you can see and monitor its location. There are, of course, other ways to sequester CO2 emissions above ground, such as in forests, but sequestration in the biosphere doesn’t last indefinitely, and the capture mechanism is vulnerable to wildfires.

Recently, two companies announced strides toward commercially viable sequestration of the GHG in solid, inert forms. Their efforts were among a dozen projects selected to receive funding from the American Recovery and Reinvestment Act of 2009 (ARRA) under the competitive "Carbon Capture and Sequestration from Industrial Sources and Innovative Concepts for Beneficial CO2 Use" grant administered by the Department of Energy and the National Energy Technology Laboratory (DOE/NETL).

Skyonic Corp. was awarded $3 million in ARRA funds. Its patent-pending SkyMine process can capture CO2 emissions from coal-burning power generators and other stationary emitters and mineralize the gas into stable baking soda (NaHCO3). The company says the process can be profitable, as the feedstocks are inexpensive and available, and the byproducts are widely used and comparatively expensive.

The federal grant, plus private investment, will fund Phase 1 of the commercial Capitol-SkyMine project to be located at the Capitol Aggregates Ltd. cement plant in San Antonio, Texas. Phase 1 will fund modeling, simulation, design, costing, and procurement activities in preparation for construction of the plant this year.

The company says that the Capitol-SkyMine plant is targeted to capture 75,000 metric tons of CO2 from flue gas emitted by the cement plant and mineralize the CO2 emissions as baking soda, while offsetting an additional 200,000 metric tons of CO2 in the manufacture of benign chemical byproducts. The plant is expected to operate at a profit, due to the sale of these byproducts. The mineralized NaHCO3 will be used in several industrial applications and tested as feedstock for bio-algae fuels. The company says that Capitol-SkyMine will also neutralize acid-rain emissions and reduce mercury and heavy metals emissions.

Another company engaged in recycling CO2, Calera Corp., was called out in a March Thomas Friedman New York Times editorial. Calera will receive $1,681,377 in DOE ARRA funds. In December, Calera Corp. and Bechtel Power Corp. announced an alliance in which the two companies will develop and build facilities using Calera’s patented process to repurpose CO2 emitted by coal- or gas-fired power plants. The process captures CO2 from raw flue gas in water and then converts the GHG into calcium and magnesium carbonates for use in manufacturing carbon-negative products such as sand, aggregate (Figure 4), supplementary cementitious materials, and cement, as well as freshwater. 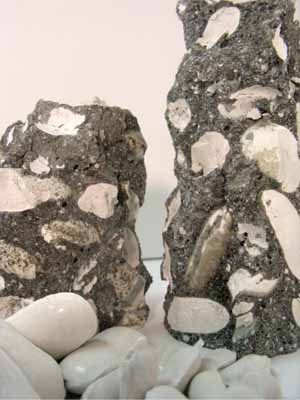 4.    From gas to solid. This sample of supplemental cementitious material (SCM) blended with portland cement and Calera aggregate uses CO2 recycled by the Calera process. SCM is used to replace cement in concrete mixtures. Each pound of cement replaced with Calera SCM means 1.5 pounds of CO2 not released to the atmosphere. Courtesy: Calera Corp.

Bechtel noted that although challenges remain to bring the process to commercial scale, they are less daunting than those facing alternative carbon sequestration approaches.

Friedman quoted Ian Copeland, president of Bechtel Renewables and New Technology as saying: "The fundamental chemistry and physics of the Calera process are based on sound scientific principles and its core technology and equipment can be integrated with base power plants very effectively."

Calera says that based upon pilot scale data, its process can also easily achieve SO2 capture efficiencies in the range of 95% to 98% and can capture other components with aqueous solubility, including mercury, trace metals, NO2, ammonia, HF, and HCl.