U.S. wind power is becoming more widespread and costs are generally on the decline, but the sector is troubled by policy uncertainties, a new report from the Energy Department says.

After a lackluster year in 2013, wind power capacity additions in the U.S. rebounded nearly 8% in 2014, driven by recent improvements in the cost and performance of technologies, growing corporate demand for wind energy, and state-level policies, the 2014 Wind Technologies Market Report says. 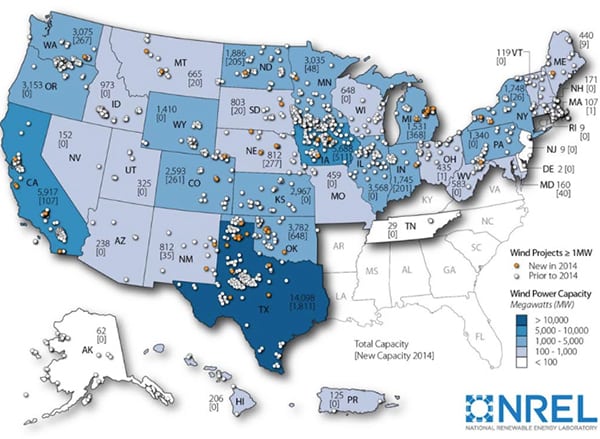 1. 1.Where wind power is being developed in the U.S. Numbers within states represent cumulative installed wind capacity. Numbers in brackets represent annual additions in 2014. Source: NREL

However, prospects for growth beyond 2016 are uncertain. “The [production tax credit (PTC)] has expired, and its renewal remains in question,” the report says. “Continued low natural gas prices, modest electricity demand growth, and limited near-term demand from state renewables portfolio standards (RPS) have also put a damper on growth expectations. These trends, in combination with increasingly global supply chains, have limited the growth of domestic manufacturing of wind equipment.” 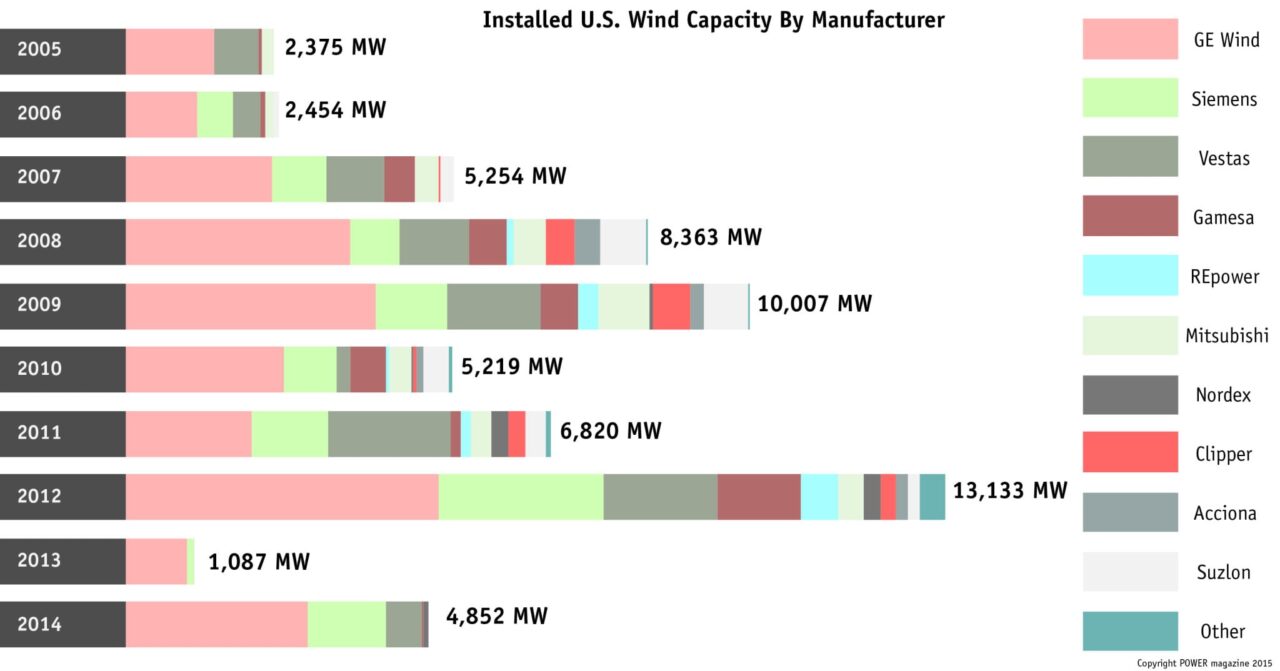 One reason for that is that the domestic supply chain continues to grapple with swings in demand. “As the cumulative capacity of U.S. wind projects has grown over the last decade, foreign and domestic turbine equipment manufacturers have localized and expanded operations in the United States. But with uncertain medium- to long-term demand and growing global competition, expectations for further supply-chain expansion have become more pessimistic,” the report explains. “As a result, though many manufacturers increased the size of their U.S. workforce to meet near-term demand, market consolidation and restructuring were also major trends.”

Another noteworthy trend is that investor-owned utilities own a growing share of the nation’s wind power capacity. Of the cumulative 65.9 GW capacity installed by the end of 2014, 82% was owned by independent power producers (IPPs), while utilities owned 16%. Utilities, however, bought power from 53% of all wind power capacity installed in the U.S.

An interesting revelation is that merchant and quasi-merchant projects—those whose electricity sales revenue is tied to short-term contracted or wholesale spot electricity market prices rather than being locked in through a long-term power purchase agreement (PPAs)—accounted for 33% of all new capacity in 2014. Merchant and quasi-merchant projects accounted for 25% of projects installed in 2013 and about 20% in the years from 2010 through 2012.

Most merchant capacity is located in Texas—the state that leads the nation in wind installations and which put up 1,1811 MW in 2014 alone. Some reasons this is happening, according to the report, are that “wind energy prices have declined to levels competitive with wholesale market price expectations in some regions, wind PPAs remain in short supply, most projects currently under construction will come online this year or next in order to stay within the IRS safe harbor with respect to the PTC, and the recent completion of the CREZ transmission lines in Texas provides market access to a significant amount of new wind capacity within a hedge-friendly market.” 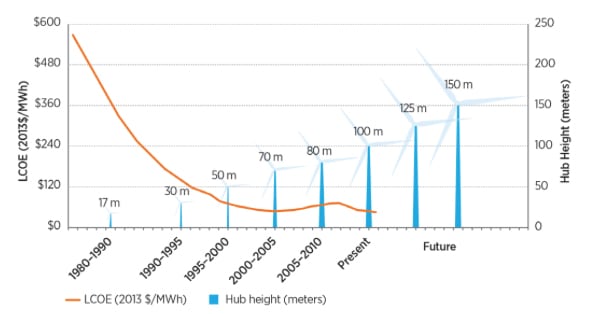 PPA prices have also seen a downward slide since 2009, though they vary by region.  Compared to nearly $70/MWh for PPAs executed in 2009, the national average levelized price of wind PPAs signed in 2014 fell to around $23.5/MWh nationwide.

Finally, though report notes that operations and maintenance (O&M) costs are an important component of the overall cost of wind energy and “can vary substantially among projects,” it laments the general lack of publicly available market data on actual project-level O&M costs. “Anecdotal evidence and recent analysis … suggest that unscheduled maintenance and premature component failure in particular continue to be key challenges for the wind power industry,” it says.

Financial statements of public companies with sizable U.S. wind project assets, for example, “indicate markedly higher total operating costs,” it says. “Specifically, two companies—Infigen and EDP Renováveis (EDPR), which together represented 4,864 MW of installed capacity at the end of 2014 (nearly all of which has been installed since 2000)—report total operating expenses of $25.1/MWh and $21.4/MWh, respectively, for their U.S. wind project portfolios in 2014.”